High population also divides the family and thus the size of land becomes smaller and smaller. Small land holdings produces less quantity of food grains. Thus people become poorer and poorer. The government have to spent a large amount to eradicate poverty. This amount can be spent on. Other constructive purposes. Thus other developmental programmes are neglected. This increases the poverty.

Question 2.
“Poverty is the mother of all evils”. Explain. (MP 2011, 12)
Answer:
It is said poverty is the mother of all evils and it is true also. Poverty give birth to many social evils like then, bribary, corruption etc. Youth group wants to fulfill their needs and when they are unable to fulfil them because of lack of money they take the help of wrong means. People involved themselves in antisocial activities which disturb their family life.

Tension and conflict takes place in their family life. Thus the entire family life gets disturb. Qualities like honesty, kindness, love and affection, tolerance moral values and brotherhood gradually disappears from the society. Thus we can say that because of poverty many problems in the society arises

Question 6.
Mention the social causes for unemployment. (MP 2010)
Answer:
The social conditions of India are responsible for poverty. Excessive expenditure on birth, death, marriages results in.

Question 7.
What is meant by poverty. (MP 2010)
Answer:
When a person is not able to satisfy his basic requirement of life (food, clothing and shelter), such a state is called ‘poverty’ according to Prof. Dandekara expert of planning commission, when a person is unable to obtain nutrition of 2400 calorie in urban area and 2100 calories in rural area, ft is said to be “Poverty”, debts which increases poverty.

Pessimistic views of Indians considers poverty as a matter of fate and not much attention is paid on its removal.

Question 8.
Explain the term ‘Swarn Jayanti Gramin Swarojgar Yojana’? (MP 2009)
Answer:
The scheme was started on 1st April 1999. The programs aims at bringing the poor families above poverty line within the period of three years by organizing them into self help groups a mix of bank credit and government subsidy. This program also aims to generate additional income for rural poors. This is being conducted through the district village development agency. (Jila Gramya Vikas Abhikaran).

Question 9.
Explain the term “Antyodaya Anna Yojana”? (MP 2009, 12)
Answer:
Antyodaya Anna Yojna: Was launched on 25th December, 2001. The main objective of this scheme is to provide food grains to the people living below the poverty line, who are included under the Targeted public distribution System, In this scheme 35 Kilograms of cereal per month is distributed to 1.50 crore poor families on special concessional price. The Central Issue Prices of wheat and rice under this scheme are Rs. 2 and Rs. 3 per kilogram respectively.

According to Prof. Nurkse, “Vicious cycle of poverty means such powers moving on circular path like planets which act and react on each other in such a way that the country remains in the state of poverty.”

Characteristics of the vicious cycle of poverty:
(i) The cause and result of poverty is poverty itself.
(ii) Poverty rhoves from its starting and end point acting and reacting on a circular path.
(iii) Its effect is cumulative that is, poverty found on one level becomes more harmful at another level.
(iv) It is such a continuous process which shifts the related components down. According to Prof. Nurkse, the point to be noted in this context is that the lowest level of the actual income is the cause and result of the lowest level of the demand and consumption of commodities. The effect of the decrease in actual income is on the demand of the commodities and the savings of the people as is clear from the following figure: 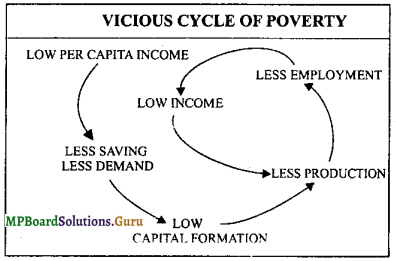 Question 1.
What are the causes of poverty in India?
Answer:
The main causes responsible for poverty in India are following:
(1) Defective development strategy: In India strategy a contradiction of poverty with growth is seen because the benefits of development are limited to only some people. As a result of it the poor are becoming poorer and the rich richer. Opportunities for further progress are available to the educated and people who have facilities while the poor are unable to obtain even higher and technical education, due to scarcity of wealth. The Government has made job opportunities available but its progress is very slow.

(6) Inflation and Price rise: A huge amount of wealth is spent on the accomplishment of the development tasks. It generates inflationary pressure on the economy and the prices start increasing. As a result the problem of poverty becomes more severe.

(8) Low Productivity: In India the productivity is low, therefore proper returns from the resources are not obtained and the people remain poor. Low productivity in the agriculture sector is the chief reason for rural poverty.

(11) Social reason: People of India spend a big amount of their income on various programmes because of socio-cultural customs. On one hand it decreases the saving and on the other hand it increases indebtedness. Apart from this, ignorance, fatalism, conservation are also the causes of poverty in India.

(1) Swarnjanyanti Gram Swarojgar Yojana (SGSY): (MP 2009), as started on 1st April, 1999. The programme aims at bringing the poor families above poverty line within the period of three years by organizing them into self help group through a mix of bank credit and government subsidy. This programme also aims to generate additional income for rural poorers. This is being conducted through the District village Development Agency (Jila Gramya Vikas Abhikaran).

(2) Swarnjayanti Shahri Rojgar Yojana: This scheme was launched on 11th December, 1997 for the eradication of poverty in urban areas. The scheme aims at providing financial aid to the poors in the urban areas for self employment and for building assets for the creation of salaried employment.

(3) Prime Minister Rojgar Yojana: The scheme started on 2nd October, 1993. It aims to create self employment opportunities for educated unemployed youth of 18 to 35 years age group in rural areas and small town.

(4) Grameen Rojgar Srajun Karyakram: This scheme was launched in April 1995 with the aim to establish projects and create self employment opportunities in rural areas and small towns.

(5) Annapoorna Yojana: This scheme was started on 1st April, 2000. This scheme aims to provide food security to people of 65 years of age and above who were illegible to obtain pension under the National Old Age Pension Scheme but are not receiving it. Under this scheme per month per head 10 kilograms of food grains are provided free of cost. In the year 2002 – 03 National Social Help Program was merged with it.

(7) Sampoorna Grameen Rojgar Yojana: This scheme was launched in the rural areas with the aim of increasing job opportunities along with food security. The labourers working under this scheme are paid a minimum quantity of food i.e., 5 kilogram of cereals and a minimum 20 per cent wages in cash. The aim of this scheme is to provide security to the weaker sections of the society.

(8) Gram Samradhi Yojana: A declaration to launch this scheme was made in March 1999. The present existing Jawahar Rojgar Yojna will be changed in a way that all the funds can be spent by the Gram Panchayats, so that they can use it in rural development programmes. Thus they will have power to prepare and implement annual plans related to this work.

(9) Antyodaya Anna Yojana: (MP 2009) – Was launched on 25th December, 2001. The main objective of this scheme is to provide food grains to the people living below the poverty line, who are included under the Targeted public distribution System. In this scheme 35 Kilograms of cereal per month is distributed to 1.50 crore poor families on special concessional price. The Central Issue Prices of wheat and rice under this scheme are Rs. 2 and Rs. 3 per kilogram respectively.

(10) Employment Guarantee Act (2005): Its main aim is to provide 100 days employment every year to at least one adult of each rural or urban poor and low income family. Under this programme it is necessary to provide employment to an applicant within 15 days. If employment is not provided within the due time then an unemployment allowances will be given to the concerned person.

The allowance would be at least one third of the minimum wages. This scheme was implemented on 2nd February, 2006. In 200 most backward districts of the country.

Question 3.
“India is a rich country but her inhabitant are poor.” Explain.
Or
“Poverty is an obstacles in the economic development of the country”. Explain.
Or
Explain the causes of poverty of India.
Answer:
India is a rich country but her inhabitants are poor because India possesses a great variety of flora and fauna and she is very rich in mineral deposits. India has a vast deposits of iron, coal, mica, copper etc. we, Indians are poor because forest, mineral resources and human resources are not fully utilized.

India is rich in production of certain crops also. India stands first in the production of tea in the world. Thus if the resources available would be used properly and economically Indians would definitely raise their standard of living.

India is also very rich in cultural and natural heritage. Culture of India is rich and ancient. On the northern-eastern boundary of India lies Himalaya which protects us from enemy and cold polar winds. It also causes rains in India. The southern part of India is peninsular. It is surrounded by water on three sides. Variety of fish is found in these oceans. We get the advantages of natural ports on these oceans.

Many agro-based and mineral based industries are developed here because of its richness in minerals and agricultural products.

Indians are poor because of other problems like over population, corruption, uncertain rainfall and wastage of human powers and other resources. So it is said that India is rich country but its inhabitants (people) are poor.

Question 4.
Suggest some measures to remove poverty in India.
Answer:
The following are the suggestions to remove the poverty of India:
1. Education: Education and literacy is very essential to remove poverty from our country. Improvement is necessary in present education system. Professional and practical education should be given preference. Education in the field or agriculture is must.

2. To control population: Population problem is a great problem of India. It is a hindrance in the way of progress of our country. For this, family planning programmes should be implemented on a large-scale.

5. Development in agriculture: Development should be done in the field of agriculture. New techniques and implements should be applied so that production will be increased. This will increase the efficiency of the labourers also. Thus to some extent poverty can be checked.

6. Health and hygiene: Workers should be protected from diseases. For this, special efforts must be taken by the government and industrialists. Special medical aid should be arranged for the workers so that they can produce more products with high efficiency.

I. Choose the correct alternative:

II. Fill in the blanks:

Question 4.
From the population point of view India stands ………….. in the world.
Answer:
Second

Question 2.
Capital formation is the foundation of economic progress of a nation.
Answer:
False

Question 3.
All type of climatic conditions of the world are available in India.
Answer:
True

Question 4.
India sources of water are not there in abundance.
Answer:
False

V. Give answer in one word:

Question 2.
To provide food grains to the people living below the poverty line.
Answer:
Antyoday Yojana

Question 3.
A stage when the value of currency diminishes and prices of goods and services increase.
Answer:
Inflation

Question 4.
The main cause of poverty.
Answer:
Unemployment

Question 5.
An average income obtained by a person in a financial year.
Answer:
Per capita income.