Students who feel tough to learn English Chapter 18 The Great Pyramid concepts can take help from this MP Board Class 7th Special English Solutions PDF and answer all the questions easily in the exams. Check out the links available here and download textbook solutions for MP Board Class 7th English Solutions. MP Board Solutions for Class 7th English Chapter 18 The Great Pyramid Questions and Answers are given to you after sample research and as per the latest edition textbooks. Clarify all your queries and solve different questions to be familiar with the kind of questions appearing in the exam. Thus, you can increase your speed and accuracy in the final exam.

This can be only possible by reading the passages and topics involved in the MP Board solutions for Class 7th English . All the Solutions are covered as per the latest syllabus guidelines. Practice using these MP Board Class 7th English Chapter 18 The Great Pyramid Questions and Answers PDF and test your preparation level and bridge the knowledge gap accordingly.

A. Answer these questions

Question 7.
How long did it take to build?
Answer:
It took twenty years to build the Great Pyramid.

B. Choose the correct option.

A. Fill in the blanks with the words given below:

(tomb, glory, preserved, buried, skilled, slaves, everlasting, art, architect)
The Taj Mahal is the greatest ………. of the Moghuls. It is a ………… built by Shah Jahan in the memory of his wife, Mumtaz Mahal. She was …………. in it, but her body was not ………… like those of the Egyptian kings. The ………… who built Taj was Ustad Isa. Thousands of workers from all over the country and perhaps many more …………. worked on it for about seventeen years. The Taj is a work of ………… and it will remain an …………. wonder of the world.
Answer:
glory, tomb, buried, preserved, architect, slaves, art, everlasting.

B. Find the opposites of the words listed below from the words given in the box and write them:

A. Study the sentences in the table given below: 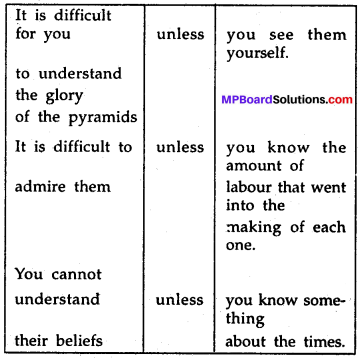 Now write ten meaningful sentences from the table given below. 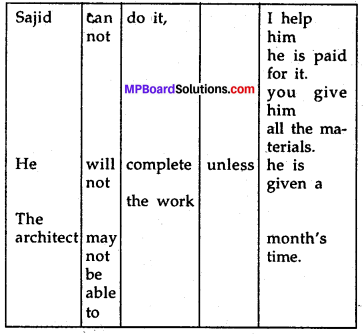 A. Discuss in pair, where the following are situated and then match them. Write the correct answer: 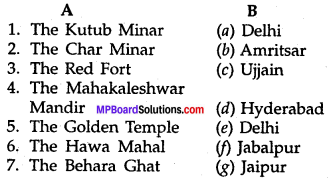 B. Discuss with your teacher about the stupas of Sanchi.

Find answers to the following questions:
(a) Where is Sanchi?
(b) Who built these Stupas? Why?
(c) What are they famous for?
Answer:
(a) Sanchi is in Madhya Pradesh.
(b) The kings of that period built there stupas. They wanted to place the rechies in them.
(c) They are famous because relies of Buddha or Buddhist monks are placed in them. 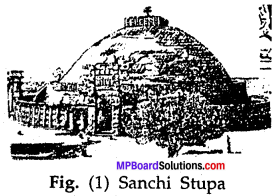 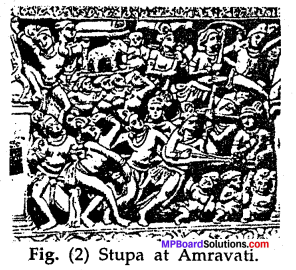 B. Write a short account of the Great Pyramid.
Hints : Who built it and why?
Time taken to build it
Number of slaves employed
Its base, height and its faces A wonder of the world.
Answer:
The great Pyramid was built by Cheops, the most famous King of Egypt about four thousand years ago. It took twenty years to build this Great Pyramid. One hundred thousand slaves were engaged to build it. It stands on a base of more than twelve acres of land. Its height is 500 feet. Its faces are very smooth. About two and a half million blocks of stone were used for it. Each block weighed about two and a half tons. It is very solidly built. There is no room even for a single hair to be slipped in between any two blocks of stones. This everlasting pyramid is the glory of Egypt and remains a wonder of the world to this day.

A. Collect more information and pictures of the Kutub Minar, Red Fort and the Golden Temple. Make a chart and write at least two or three sentences about each of them.
Answer:
Class-room Activity.

We hope the data given here will benefit you to the fullest extent at the time of preparation. For better understanding of English subject this MP Board Solutions for Class Class 7th English Chapter 18 The Great Pyramid Questions and Answers PDF is the best resource. Download & ace up your preparation. Keep in touch with us and get the latest information on MP board Textbook Solutions PDF.