Students who feel tough to learn English Chapter 20 The Story of Writing concepts can take help from this MP Board Class 7th Special English Solutions PDF and answer all the questions easily in the exams. Check out the links available here and download textbook solutions for MP Board Class 7th English Solutions. MP Board Solutions for Class 7th English Chapter 20 The Story of Writing Questions and Answers are given to you after sample research and as per the latest edition textbooks. Clarify all your queries and solve different questions to be familiar with the kind of questions appearing in the exam. Thus, you can increase your speed and accuracy in the final exam.

This can be only possible by reading the passages and topics involved in the MP Board solutions for Class 7th English . All the Solutions are covered as per the latest syllabus guidelines. Practice using these MP Board Class 7th English Chapter 20 The Story of Writing Questions and Answers PDF and test your preparation level and bridge the knowledge gap accordingly.

Question 2.
How does commerce depend upon writing?
Answer:
Commerce in the modern world is carried on mainly with the help of cheques, account books and correspondence. In case the writing disappears, all these would disappear. National and international trade would become impossible and come to stop.

Question 6.
What is an alphabet? How is it a better system than picture writing?
Answer:
An alphabet is a collection of letters. Each letter stands for a sound of the language. The letters are learnt in a fixed order. Instead of drawing pictures of objects we talk about, this system of writing represents the sounds we use in our speech. As the sounds of any one language are not many, we need not have a large number of symbols. In most languages the letters of the alphabet are never more than fifty. But we can form several hundreds or thousands of words by combining letters. The alphabetic system of writing is therefore far better than picture writing.

Question 8.
What, according to the simple servant, was magical about the letter?
Answer:
The simple servant thought that there must be something magical in the letter.
He failed to understand how it could see him eating the mangoes and tell his master’s daughter about it.

A. Write one word for the following. Choose from the given words
(alphabets, cheque, commerce, Correspondence, account, direction.)
Example:
The buying and selling of goods and services
Answer:
commerce

A. In the examples given below, notice how the sentences against (1) have been joined in (2) by using ‘not only’, ‘but also’/’as well’.

B. Now join these sentences as shown in the examples above.

C. Punctuate the following paragraph using .,?”” and capital letters, so we see that in absence of writing.

Sit in groups of four and five. Look at a currency note and talk about its features (marks, figures, shapes, size etc.)
Find answer to these.

Find out what languages are written on a hundred rupee note. Write down the names of the languages and the regions where these are spoken.
Answer:

Complete the table with the help of your teacher.

Interview your friends who speak regional languages mentioned above (some or any of them) and write it in the proper column. Use this table for the interview. 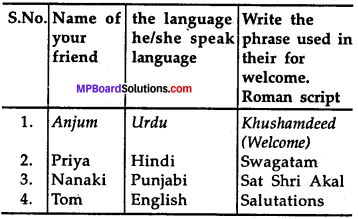 The Story of Writing Word Meanings 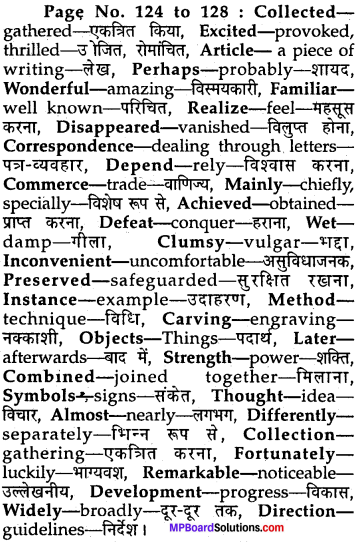 We hope the data given here will benefit you to the fullest extent at the time of preparation. For better understanding of English subject this MP Board Solutions for Class Class 7th English Chapter 20 The Story of Writing Questions and Answers PDF is the best resource. Download & ace up your preparation. Keep in touch with us and get the latest information on MP board Textbook Solutions PDF.