Students who feel tough to learn English Chapter 17 The Pied Piper of Hamelin-II concepts can take help from this MP Board Class 7th Special English Solutions PDF and answer all the questions easily in the exams. Check out the links available here and download textbook solutions for MP Board Class 7th English Solutions. MP Board Solutions for Class 7th English Chapter 17 The Pied Piper of Hamelin-II Questions and Answers are given to you after sample research and as per the latest edition textbooks. Clarify all your queries and solve different questions to be familiar with the kind of questions appearing in the exam. Thus, you can increase your speed and accuracy in the final exam.

This can be only possible by reading the passages and topics involved in the MP Board solutions for Class 7th English . All the Solutions are covered as per the latest syllabus guidelines. Practice using these MP Board Class 7th English Chapter 17 The Pied Piper of Hamelin-II Questions and Answers PDF and test your preparation level and bridge the knowledge gap accordingly.

A. Answer these questions:

The Pied Piper Of Hamelin Questions And Answers MP Board Class 7th Question 1.
What suggestions would Ravi and Ashok have offered the Mayor for getting rid of the rats?
Answer:
Ravi would have suggested to the’ Mayor to ‘poison the rats if he had been a councillor. Similarly Ashok would have suggested the Mayor to employ all the carpenters in the town to mend all old traps and make thousands of new ones. Besides, he would also have asked the Mayor to get all the holes plugged.

The Pied Piper Of Hamelin Questions And Answers Class 7 MP Board Question 3.
What did the Mayor promise the Pied Piper?
Answer:
The Pied Piper promised the Mayor to rid the people of all the rats in the town. He would do so by drawing the rats after him through his secret charm.

Pied Piper Of Hamelin Question Answer MP Board Class 7th Question 4.
Why did the Pied Piper look very strange?
Answer:
The Piper looked very strange on account of his red and yellow dress and odd appearance. He was dressed in red and yellow. He was as thin as a starved rat. He had a crooked nose and bright, blue eyes. He had no beard and a smile played on his lips.

The Pied Piper Of Hamelin Questions And Answers Pdf MP Board Class 7th Question 5.
What did the Pied Piper do with the rats?
Answer:
The Pied Piper played a time on his Pipe. An army of rats followed him. He led the rats to river Weser. AH the rats except one rat ran into the water and were drowned.

Class 7 English Chapter 17 MP Board Question 6.
Why was the Pied Piper disappointed?
Answer:
The Pied Piper was disappointed because the Mayor refused to pay him the promised amount of one thousand guilders. He rather offered him only fifty guilders.

B. Tick the correct option

The Pied Piper Of Hamelin Answers MP Board Class 7th Question 1.
People wanted to get rid of
(i) the. Mayor
(ii) the rats
(iii) the councillors
Answer:
(ii) the rats

A. Fill in the blank spaces choosing the correct words from those given below:
(deny, army, cash, tune, deserve, suggest)

B. Circle the odd word:

A. Study these sentences

Now write ten meaningful sentences from the table given below. 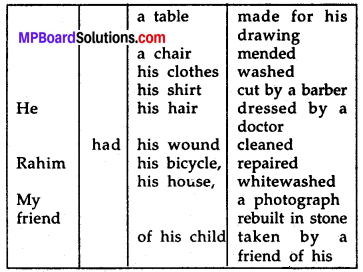 B. Rewrite the five sentences given below into passive voice as given in the first example:

Sit in pairs and talk to each other. One will speak the words of the Mayor and the other will speak the words of the piper – “Mayor would you like to get rid of the rats?”
“Who are you? Why do you ask this silly question?”
“I am the Pied Piper. By means of secret charm, I am able to draw after me all the living things on the earth or in the air.”
“A secret charm? What is it?”
“Don’t bother about it. You can pay me after I have saved you from the rats.”
“You won’t be denied anything you ask for, if you get rid of the rats for us.”
Answer:
Some more Sentences:
Pied Piper : I shall charge a thousand guilders in cash.
Mayor : Agreed.
Pied Piper : I shall start playing a tune and see its charm
Mayor : It is really a wonder that all sizes of rats have started running out of the houses.
Pied Piper : Now, I shall drown them in river Weser.
Mayor : I wish it were so!
Pied Piper : Now the work is finished. Give me my fee.
Mayor : Well, take this amount of fifty guilders. It is for your petty service.
Pied Piper : You will feel sorry for backing out of your promise.
Mayor : Do you know the result of challenging me?

Rats On A Train Question Answer Class 7 MP Board Question 1.
Describe in your own words the look and the dress of the Pied Piper.
Answer:
The Pied Piper was dressed in red and yellow. He had a pipe in his hand. He was very thin. His nose was crooked. His eyes were sharp and blue. He had no beard. He had smiling lips. He looked very strange.

This is only an imaginary story. Find out some more such stories from the story books and tell them to your friends.
Answer:
Class-room Activity 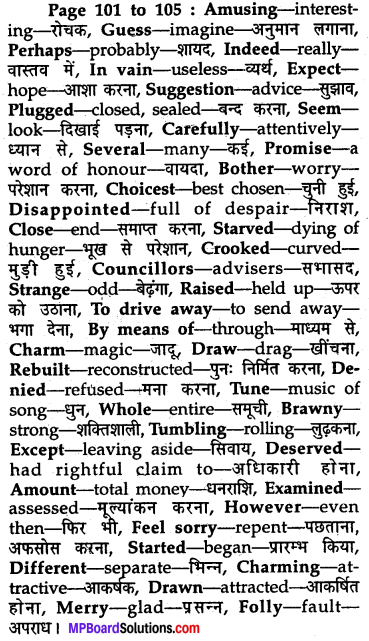 We hope the data given here will benefit you to the fullest extent at the time of preparation. For better understanding of English subject this MP Board Solutions for Class Class 7th English Chapter 17 The Pied Piper of Hamelin-II Questions and Answers PDF is the best resource. Download & ace up your preparation. Keep in touch with us and get the latest information on MP board Textbook Solutions PDF.