Is Matter Around Us Pure Intext Questions

Is Matter Around Us Pure Intext Questions Page No. 15

Question 1.
What is meant by a pure substance?
Answer:
It is the substance which is made up of only one kind of matter. It cannot be separated into other kinds of matter by any physical process.
Examples:

Question 2.
List the points of differences between homogeneous and heterogeneous mixtures.
Answer:

Is Matter Around Us Pure Intext Questions Page No. 18

Question 2.
How are sol, solution and suspension different from each other?
Answer:
Sol:

Question 3.
To make a saturated solution, 36 g of sodium chloride is dissolved in 100g of water at 293K. Find its concentration at this temperature.
Answer:
We know,

Is Matter Around Us Pure Intext Questions Page No. 24

Question 2.
Name the technique to separate:

Question 3.
What type of mixtures are separated by the technique of crystallisation?
Answer:
Crystallisation is used to separate impurities present in the solvent from mixtures to obtain pure substance as a crystal.
Example:

Is Matter Around Us Pure Intext Questions Page No. 24

Question 1.
Classify the following as chemical or physical changes:
(i) Cutting of trees.
(ii) Melting of butter in a pan.
(iii) Rusting of almirah.
(iv) Boiling of water to form steam.
(v) Passing of electric current through water and the water breaking down into hydrogen and oxygen gases.
(vi) Dissolving common salt in water.
(vii) Making a fruit salad with raw fruits and
(viii) Burning of paper and wood.
Answer:
Chemical changes: (iii), (v), (viii)
Physical changes: (i), (ii), (iv), (vi), (vii)

Question 2.
Try segregating the things around you as pure substances or mixtures.
Answer:

Is Matter Around Us Pure NCERT Textbook Exercises

Question 1.
Which separation techniques will you apply for the separation of the following?

Question 2.
Write the steps you would use for making tea.
Use the words: solution, solvent, solute, dissolve, soluble, insoluble, filterate and residue.
Answer:
Steps:

Question 3.
Pragya tested the solubility of three different substances at different temperatures and collected the data as given below (results are given in the following table as grams of substances dissolved in 100 grams of water to form a saturated solution).

(b) The solubility of potassium chloride (KCl) decreases on cooling and crystal formation will start.

So, Ammonium chloride has highest solubility at 293K.

(b) Pure substance: It is the substance which contains only one kind of particle and its composition is same throughout.
Examples:

(c) Colloid: It is the heterogeneous mixture in which the size of particles lie between true solutions and suspensions. The particles can not be seen through naked eyes but they can scatter a beam of light and possess Tyndall effect.
Examples:

(d) Suspension: It is a heterogeneous mixture in which solute particles remain undissolved and get suspended within the medium. The particles scatter a beam of light and are visible through naked eyes.
Examples:

Question 6.
How would you confirm that a colourless liquid given to you is pure water?
Answer:
Boil the water at 100°C. If it boils at 100°C and left no residue behind, then it is pure water.

Is Matter Around Us Pure Additional Questions

Is Matter Around Us Pure Multiple Choice Questions

Question 2.
Which of the following is not a mixture?
(a) Air
(b) Milk
(c) Kerosene
(d) Petroleum.
Answer:
(c) Kerosene

Question 11.
Particles of mixture of ammonium chloride and sand can be separated by __________ .
(a) Sublimation
(b) Evaporation
(c) Centrifugation
(d) Decantation.
Answer:
(a) Sublimation

Is Matter Around Us Pure Very Short Answer Type Questions

Question 1.
Define pure substance.
Answer:
The substance which is made up of only one kind of particle.

Question 11.
Name the process used in separation of cream from milk.
Answer:
Centrifugation.

Question 13.
What is emulsion?
Answer:
If both dispersed phase and dispersing medium is liquid, it is called emulsion. Example: Milk.

Question 15.
What happens to solubility of solid in liquid when the temperature increases?
Answer:
Increases.

Question 16.
What are the other names of solute and solvent?
Answer:
Dispersed phase and dispersed medium.

Question 18.
Which one has smallest particles – colloid, suspension or solution?
Answer:
Solution.

Question 19.
Name the substances that can be separated by sublimation.
Answer:
Iodine, ammonium chloride and camphor.

Is Matter Around Us Pure Short Answer Type Questions

(b) Mixture: It is the impure substance which is made up of two or more different types of pure substances like elements or compounds in any ratio.
Examples:
Milk, rocks air, salt solution and soil.

(c) Metalloid: These are the elements which show the properties of metals and non – metals. They are also called semi – conductors.
Examples:
Silicon (Si), germanium (Ge) and boron (B).

(e) Solute: It is the component of solution which is dissolved in the medium.
Example:
salt in salt solution.

(f) Solvent: It is the component of solution which dissolves the solute.
Example:
water in salt solution.

(h) Saturated solution: It is the solution in which no more solute can be dissolved at that particular temperature.

(i) Unsaturated solution: It is the solution is which more amount of solute can be dissolved at the temperature to make it saturated.

(j) Emulsion: It is a colloid in which a liquid is dispersed in another liquid but they are immiscible.
Examples:
Milk, beauty cream.

(k) Distillation: It is the technique which is used to separate two miscible liquids which are having different boiling points.
Examples:
Separating pure water from sea – water, separation of mixture of acetone and water.

(l) Tyndall effect: It is the effect caused due to scattering of light by colloidal particles.
Example:
Sunlight when passes through forest get scattered due to tiny water droplets present in the air.

(m) Crystallisation: It is the process of obtaining pure solid substances in the form of crystals from its saturated solution by cooling it down slowly.

Question 2.
Give two examples of each:

Question 4.
Write down the properties of a true solution.
Answer:

Question 5.
Write down the properties of a suspension.
Answer:

Question 6.
Define physical and chemical change and give two examples of each.
Answer:
(i) Physical change:  It is a change in which no new substance is formed and particles do not change their characteristics.
Examples:

(ii) Chemical change: It is a change in which new substance is formed and particle changes their characteristics.
Examples:

Question 7.
Define chromatography. Give examples where it is used.
Answer:
Chromatography: It is the method of separation of solid solutes which are dissolved in the same solvent. A special paper called “Chromatography paper” is used in this technique.
Examples:

Question 13.
What are the advantages and disadvantages of crystallisation method over evaporation method in separation of mixture?
Answer:
1. Advantages:

Is Matter Around Us Pure Long Answer Type Questions 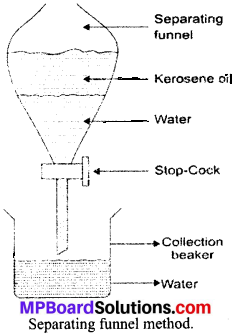 Question 3.
How can mixture of salt and ammonium chloride be separated? Name the technique and the principle involved. Mention one application of this technique.
Answer:
Mixture of salt and ammonium chloride can be separated by the process of sublimation (as shown in figure). The principle of sublime nature is involved in this. 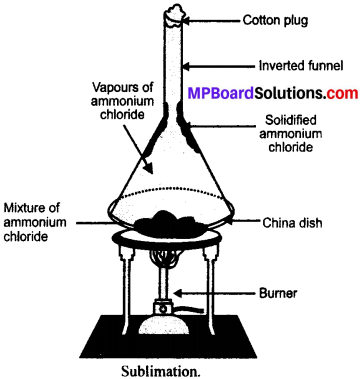 Chromatography technique is used in separation of:

Question 6.
What is distillation technique? How can the mixture of acetone and water be separated?
Answer:
Distillation: It is the technique used to separate two miscible liquids by conversion of liquid into vapours by heating and then condensing the vapours into the pure liquid.

Is Matter Around Us Pure Higher Order Thinking Skills (HOTS)

Question 1.
With the help of diagram explain the water purification system in water works.
Answer:

Question 2.
Name all the separation techniques used to separate different mixtures indicating the type of mixtures as well.
Answer:
A. Separation of solid – solid mixture:

B. Separation of solid – liquid mixture:

Is Matter Around Us Pure Value Based Questions

Question 1.
Kritika was asked to bring the jar of common salt from kitchen. But accidentally jar got slipped into the tub of water. She got tensed of scolding by mother. She went to his brother mentioning the problem. Her brother advised her to place the tub in open sunlight for long hours for two – three days. She did that and observed that common salt is left behind.
(a) What is the technique used above to separate the common salt from water?
(b) Name the type of mixtures that can be separated from this technique.
(c) Mention the values of Kritika’s brother mentioned here.
Answer:
(a) Evaporation technique is used here to separate the common salt from water.

(b) Mixtures in which solid substance is dissolved in water can be separated by this technique.
Example:
Coloured component (dye) from ink.

Question 2.
Vaibhav and Hritik’s teacher asked them to separate the mixture of acetone and water contained in the jar. Vaibhav brought a beaker and Hritik brought a separating funnel to separate the mixture. After few minutes, Hritik come with water and acetone contained in separate containers but Vaibhav come with the same mixture. Teacher congratulate Hritik for separating the mixture and advised Vaibhav to use the same technique followed by Hritik.
(a) Which technique is followed by Hritik for separation?
(b) Name the principle involved in this technique.
(c) Mention the value of Hritik seen here.
Answer:
(a) Separating funnel method is followed by Hritik for separation.
(b) Principle of difference of densities is applied in this technique.
(c) Values of obedience and wiseness is seen by Hritik.

Question 3.
Three friends Sanjana, Saumya and Shruti were sitting in a room. Sanjana told Shruti and Saumya about the visibility of dust particles in air. But, they were doubting her statement Then Sanjana closed the room and opened a window slightly. She told diem to observe the path of light and other things in that path. Saumya and Shruti were very surprised to see the presence of minute dust particles in air.
(a) Which effect is illustrated by Sanjana?
(b) Where this phenomenon can be seen naturally?
(c) What values did Sanjana show to her friends?
Answer:
(a) Tyndall effect is illustrated by Sanjana.
(b) This phenomenon is seen naturally in dense forest, in winter season through fog.
(c) Sanjana showed the values of wiseness and friendliness.

Question 4.
Pranjal went to her friend’s house and bring a black ink and a special kind of paper with her. Her friend asked her about that paper. Pranjal perform an activity with the paper by applying the dot of ink on it. And, placed the paper in ajar of water in such a way that the dot just touched the upper level of water. Finally, they observed the separation of different coloured constituents of that ink.
(a) Name the technique used by Pranjal.
(b) Describe the technique mentioned and name the paper used.
(c) Write some other applications of this technique.
(d) Write the values shown by Pranjal.
Answer:
(a) Chromatography technique is used here.
(b) Chromatography is the method of separation of solid solutes which are dissolved in the same solvent. Chromatographic paper is used in this technique.
(c) This technique is used in separation of drugs from blood, pigments from natural colours and separating sugar from urine.
(d) Pranjal showed the values of intelligence and friendliness.