Question 2.
Magnetic moment is which type of physical quantity :
(a) Scalar
(b) Vector
(c) Neutral
(d) None of these.
Answer:
(b) Vector

Question 6.
The two magnetic lines of force :
(a) Meet each other at the poles
(b) Meet at the neutral point
(c) Never meet
(d) All the above statements are correct.
Answer:
(c) Never meet

Question 3.
Match the Columns :
I. 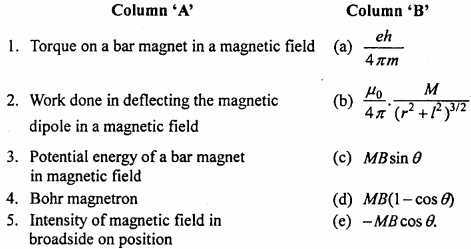 Question 4.
Write the answer in one word / sentence :

2nd definition:
“A magnetic line of force is a smooth curve in a magnetic field such that the tangent at any point on it gives the direction of the magnetic field at that point.”

Question 9.
What are ferromagnetics or ferromagnetic substances?
Answer:
Ferromagnetics are the substances, which when placed in a magnetic field are strongly magnetized in the direction of the magnetizing field. Example Fe. Ni, Co etc.

Question 12.
Define magnetic intensity. Give its SI unit.
Answer:
Magnetic intensity is the ability of a magnetizing field to magnetize a material and is defined as the number of ampere turns flowing around unit length of solenoid required to produce magnetic induction B0 inside it.
H = \(\frac { { B }_{ 0 } }{ { \mu }_{ 0 } }\)
SI unit of H is Am-1

Question 14.
Why the magnetic property increases in paramagnetic substances with cooling?
Answer:
When a paramagnetic substances is kept in an external magnetic field, then on each elementary magnet a torque acts which tries to bring them parallel to the direction of magnetic field. The thermal vibrations opposes it. If the temperature is decreased, then thermal vibrations decreases, hence the magnetic property increases.

Question 15.
Why is diamagnetism independent of temperature?
Answer:
The induced magnetic moment in diamagnetic sample is always opposite to the magnetizing field, no matter what the internal motion of atom is.

Question 16.
What is Curie point?
Answer:
Curie point is the temperature above which a ferromagnetic substance becomes paramagnetic.

Question 1.
Write Coulomb’s law of magnetism and define the unit magnetic pole with its help.
Answer:
Coulomb’s law:
The force of attraction or repulsion between two magnetic poles is directly proportional to the product of pole strength and inversely proportional to the square of the distance between them and acts along the line joining the roles.
Let m1 and m2 be the pole strengths and d be the distance between them, then 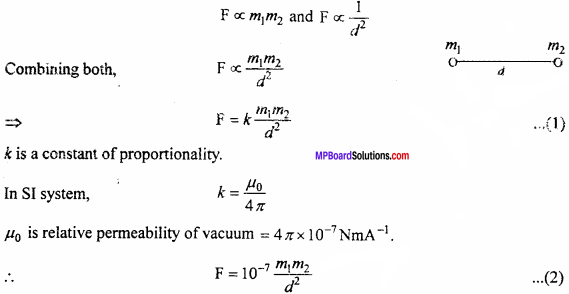 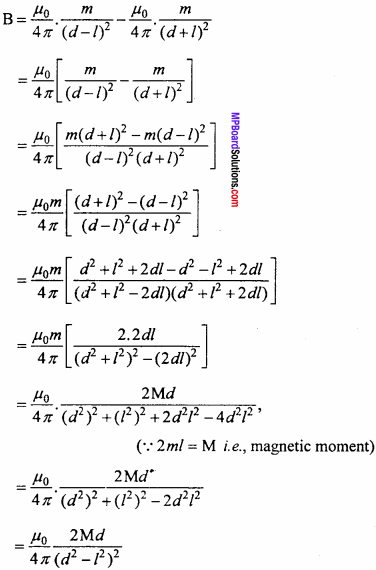 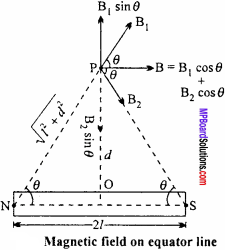 Magnetic field is the force experienced by unit north pole placed at that point.
Hence, B = \(\frac {F}{m}\)
If m = 1, then B = F.
Let NS be a bar magnet of pole strength m and effective length 2l and magnetic moment M = m2l.
Consider a point P at a distance d from the centre O of a magnet on its neutral axis. Let unit north pole be placed at P.
Now, the intensity of field at P, due to N – pole will be : 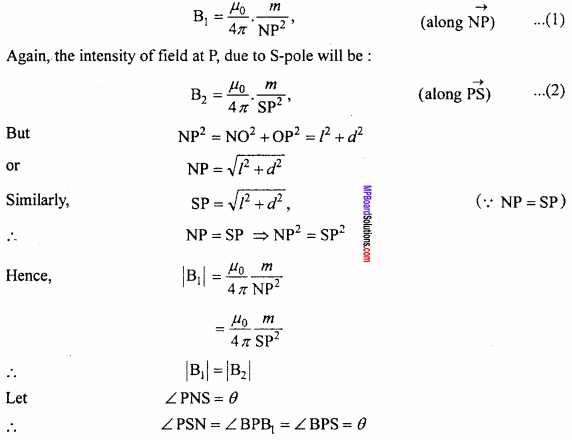 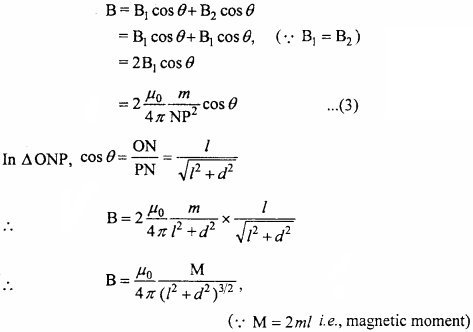 2nd definition:
“A magnetic line of force is a smooth curve in a magnetic field such that the tangent at any point on it gives the direction of the magnetic field at that point.” 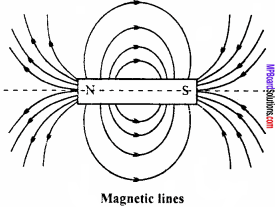 Properties of lines of force : 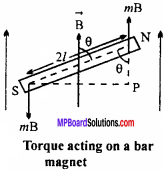 Definition of magnetic moment :
As τ = MBsinθ
If the magnet is held perpendicular to the field, then 0= 90° or sinθ = 1 then the torque acting on the magnet will be maximum, if the strength of the applied field is 1 i.e., B = 1,then
τmax = M
Hence, magnetic moment is numerically equal to the maximum torque acting on the bar magnet when it is held perpendicular in a uniform magnetic field of unit intensity. 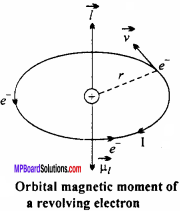 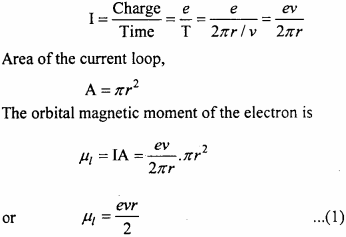 According to right hand thumb rule, the direction of the magnetic dipole moment of the revolving electron will be perpendicular to the plane of its orbit and it the downward direction, as shown in Fig.
Also, the angular momentum of the electron due to its orbital motion is
I = mevr  … (2)
The direction of / is normal to the plane of the electron orbit and in the upward direction, as shown in Fig.
Dividing equation. (1) by equation. (2), we get

The above ratio is a constant called gyromagnetic ratio. Its value is 8.8 x 1010Ckg-1.
So

This is the required expression. 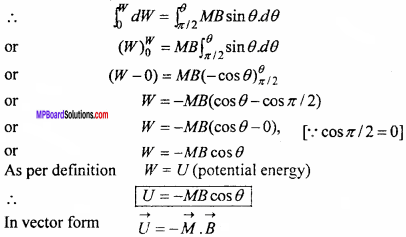 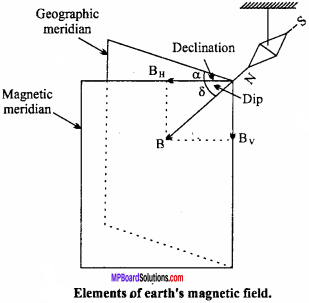 3. The magnetic lines of force at Melbourne city of Austrilia will go outside.

4. Geographical North pole or South pole is just situated vertically to the direction of earth magnetic field. Therefore the magnetic needle will be independent to revolve in vertical plane 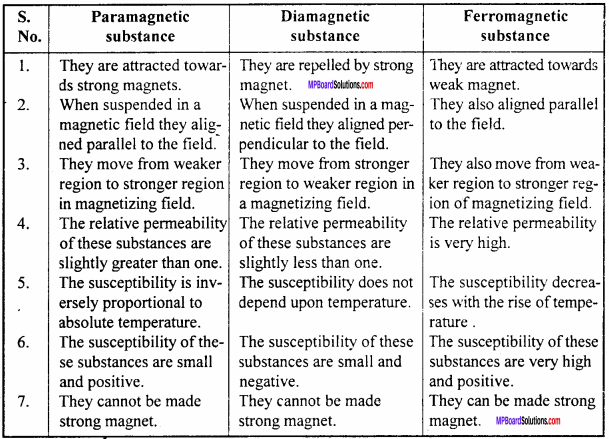 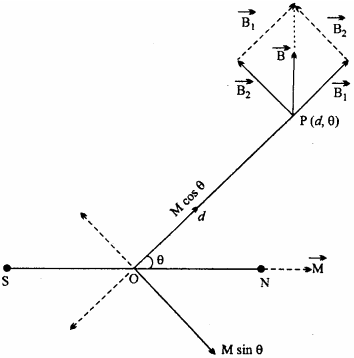 Question 1.
Magnetic wire of magnetic moment ‘M’ is bent in the shape of L, at one third of its length. What will be the new magnetic moment.
Solution: 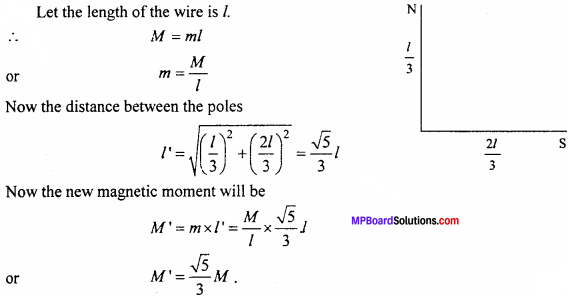 Question 3.
The distance between two magnetic poles of pole strengths ‘m’ and ‘4m’ is 3m. Find the distance of point in between them at which magnetic field intensity is zero.
Solution: 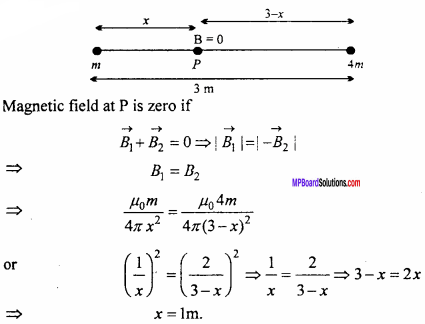 Question 4.
If the pole strength of each pole of two similar magnetic poles is made two times and distance between them becomes half of its initial value then how will magnetic force acting between them change?
Solution: 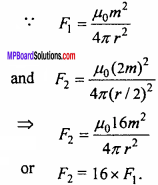 Question 7.
A short bar magnet placed with its axis at 30° experiences a torque of 0.016 Nm in an external field of 800G

Question 10.
A planar loop of irregular shape encloses an area of 7.5 x 10-4 m2 and carries a current of 12 A. The sense of flow of current appears to be clockwise to an observer. What is the magnitude and direction of the magnetic moment vector associated with the current loop? [NCERT]
Solution:
Here A = 7.5 x 10-4m2, l = 12A
Magnetic moment associated with the loop is
m = IA = 12 x 7.510-4 = 9.0 x 10-3 JT-1
Applying right hand rule, the direction of magnetic moment is along the normal to the plane of the loop away from the observer.