Question 6.
If a core of soft iron is placed between the coil then their mutual inductance :
(a) Decreases
(b) Increases
(c) Remain unchanged
(d) Nothing can be said.
Answer:
(b) Increases 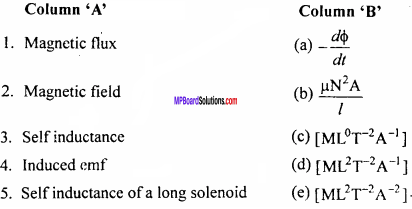 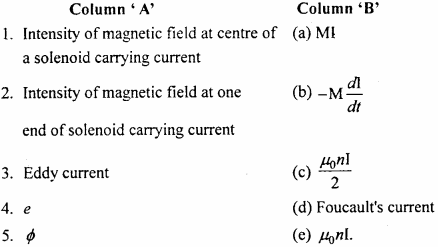 Question 4.
Write the answer in one word/sentence :

Question 3.
Lenz’s law is accordance to which law?
Answer:
Law of conservation of energy.

Question 5.
Why coil with in the resistance box is double coiled?
Answer:
To avoid self – induction phenomenon.

Question 1.
What is magnetic flux? Write its SI units.
Answer:
The number of magnetic lines of force passing normally through any area in a magnetic field, is called magnetic flux linked with that area. It is denoted by ϕ(phi).

Question 3.
A bird sitting on a wire carrying current at high voltage, flies away. Why?
Answer:
As soon as the current flows through the wire, an induced current is produced in the body of the bird, the direction of the current in the wings are opposite. Hence, they are repelled and the bird flies away.

Question 4.
In the given figure, which plate of the capacitor AB is positive and which plate is negative?
Answer:

According to Lenz’s law induced current flows from B to A, therefore plate A is positive and plate B is negative.

Question 5.
A metallic chain touching the ground is attached with the truck carrying explosive matter. Why?
Answer:
During the motion of the truck, the axle cut the magnetic flux of the earth, which causes an induced e.m.f. set up across its axle. This induced charges are earthed by the chain. Which prevent the explosive from the fire.

Question 7.
The resistances in the resistance box are double coiled. Why?
Answer:
In the double coil, the current flows in opposite directions, thus the magnetic fields produced cancel each other and hence induced current is not produced.

Question 8.
When any electric circuit is suddenly cut off, then sparks take place. Why?
Answer:
When the switch is off, the magnetic flux linked with the circuit becomes zero suddenly. Therefore, a strong induced current flows through the circuit in the direction of main current, which causes a high potential difference across the terminal and due to electric discharge, sparks are seen.

Question 10.
A coil in magnetic field is moved

Question 11.
Two coils A and B are kept perpendicular to each other as shown in figure. If flow of current in any one coil is change will induced current will generate in the second.
Answer:
When current is flows in use one coil, the induced flux produce will be parallel to second coil and there will be no change in magnetic flux. Hence no induced current will be produced in second coil.

Question 13.
Three coils are arranged as shown in the figure :

Faraday’s laws of electromagnetic induction:
1. Whenever there is a change in magnetic flux linked with an electrical circuit, an e.m.f. is induced in the circuit, therefore an induced current flows in it. The induced current losts so long as there is change in flux.

2. The induced e.m.f. is directly proportional to the rate of change in magnetic flux.

Formula for induced e.m.f.:
Let Φ1 weber be the flux linked with a closed electrical circuit at any instant of time t1. After time ∆t i.e., at time t2 seconds, let the flux be Φ2 weber. 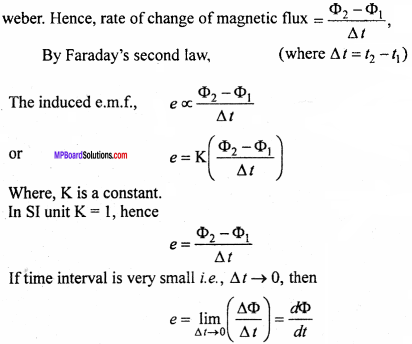 This is the required formula.
Hence, the induced e.m.f. is directly proportional to the rate of change of flux.

1. When N – pole of a bar magnet is brought closer to a coil, a current is induced to develop N – pole on the adjacent face of the coil to oppose the motion of N – pole towards the coil. This means the induced current must be anticlockwise as seen from the magnet, [see Fig.(a)].

Question 16.
Explain that Lenz’s law is in accordance with the law of conservation of eaefgy.
Answer:
When a magnetic north pole is brought near a plane of a coil, the magnetic pole induced in that plane is also north pole causing a repulsive force on the north pole of the magnet. Therefore, work will have to be done against this repulsive force to bring the magnet’s north pole closer to the coil. The work done (mechanical energy) is transformed into electri¬cal energy causing a current induced in the coil.

Question 17.
Explain self – induction and demonstrate the phenomenon by an experiment.
Answer:
Self – induction:
During the motion of the truck, the axle cut the magnetic flux of the earth, which causes an induced e.m.f. set up across its axle. This induced charges are earthed by the chain. Which prevent the explosive from the fire.

Experiment:
The circuit of the experiment is shown in the figure. It consists of an insulated copper coil L, wound on soft iron core. Cell E, rheostat Rh and a tapping key K are connected in series. A bulb B is connected in parallel with the coil. Now, the key is closed, the bulb glows slowly, then becomes bright and when it is opened, the bulb flashes bright and then goes off.

As the key is pressed, the flux linked with coil changes and an induced current flows in the opposite direction of main current, because of this the current grows slowly in the circuit.But when the key is opened, the flux suddenly decreases to zero, therefore a strong induced current flows in the same direction of circuit current makes the bulb very bright for a moment.

Question 18.
What is self – induction? What is meant by self-induction of coil? Explain. WritgTts unit.
Answer:
Self – inductance:
When the current flowing through a circuit, an induced e.m.f. is set up in the same circuit, which opposes the main current. This phenomenon is called self – induction.
When the current increases in the circuit, induced current flows in the opposite direc¬tion and when the current decreases in the circuit, the induced current flows in the same direction of circuit current.
Let ϕ be the flux linked with a circuit when a current (l) flows through it. Then,
ϕ ∝I
or ϕ = LI …(1)
Where, L is a constant, called self – inductance of the coil.
Now, if I = 1, then by eqn. (i), we get
ϕ = L
Thus, the self-inductance of a coil is numerically equal to the magnetic flux linked with the coil, produced by unit current.
By Faraday’s law, e = –\(\frac {dϕ}{dt}\)
Putting the value of ϕ from eqn. (i), e = –\(\frac {d(LI)}{dt}\)
or e = -L\(\frac {dI}{dt}\)
If \(\frac {dI}{dt}\) = 1
Then, e = – L
Therefore, the self – inductance of a coil is numerically equal to the opposing e.m.f. produced in the coil due to a unit rate of change of current in the circuit.
Unit : Unit of self-inductance is henry (H).

Unit : Its unit is Henry in SI system.
Dimensional formula : 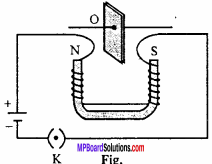 Demonstration:
A rectangular copper plate is free to oscillate about a horizontal axis, passing through O. It is placed between the pole pieces of an electromagnet NS. Oscillate the plate, when no current is flowing in the circuit, the plate will oscillate for a long time and due to air resistance finally its amplitude of oscillation decreases.

Now, oscillate and pass the current. It is observed that the oscillations of the plate will be damped soon. Just as eddies are produced on water surface, the change of flux through the metal plate develops induced current known as eddy currents.

Uses : Eddy currents are used in : 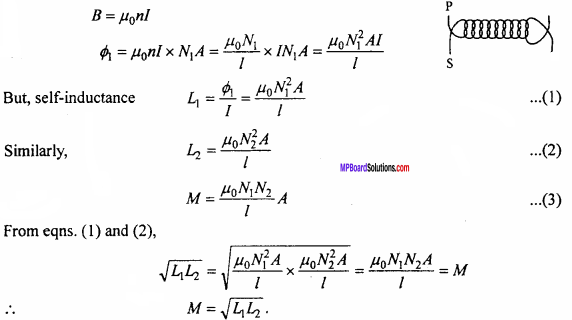 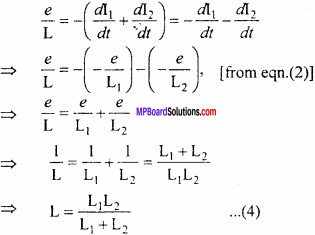 Equation (4) is the required expression

2. No. of turns : Self – inductance of a solenoid increases with number of turns.

Question 3.
Obtain an expression for mutual inductance of two long solenoids. What are the factors on which mutual inductance depends?
Answer:
Let S1, and S2 be the two long coaxial solenoids such that S1, is completely surrounded by S2. The lengths of both the solenoids are l. n1 and n2 are the number of turns per unit length respectively.

2. Area of cross – section of both the coils : As the area increases, the mutual inductance increases.

3. Material of core : If the permeabilities of the cores in the solenoid are large, then mutual inductance increases. In presence of soft – iron core, the inductance is greater than that of air.

4. Length of the solenoid : For larger solenoids, mutual inductance is less. 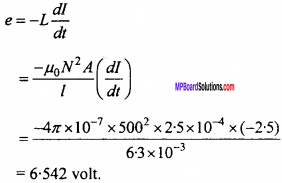