Question 3.
On replacing the air by an insulating material between the plates of a capacitor its capacity:
(a) Remains unchanged
(b) Increases
(c) Decreases
(d) Nothing can be said.
Answer:
(b) Increases

Question 4.
On increasing the separation between the plates of a parallel plate capacitor its capacitance :
(a) Remains unchanged
(b) Increases
(c) Decreases
(d) Nothing can be said.
Answer:
(c) Decreases

Question 5.
When two capacitors are joined in series each capacitor will have the same :
(a) Charge
(b) Potential
(c) Charge and potential
(d) Neither charge nor potential.
Answer:
(a) Charge

Question 4.
Write the answer in one word / sentence:

Question 2.
Write the name of the physical quantity whose SI unit in J/C. Is it a scalar or vector ?
Answer:
Electric potential, it is a vector quantity. 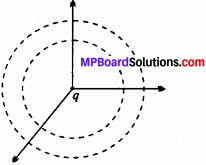 Question 4.
Define farad.
Answer:
If the potential of a conductor increases by one volt when one coulomb of charges is given to it, then the capacity of the conductor is said to be one farad.

Question 8.
Potential between two parallel surface are same. The distance between them is R. If a charge q is bought from one surface to another, then what will be the work I done to do this ?
Answer:
Amount of work done will be zero on both the surface are equipotential.

Question 10.
A capacitor of capacity C is charged with potential difference V. What will be the magnitude of electric flux passing through the surface of it ?
Answer:
Zero.

Question 12.
Write one use of capacitor ?
Answer:
To accumulate electric charge.

Question 9.
Why must electrostatic field be normal to the surface at every point of a charged conductor ?
Answer:
If electric field is randomly directed, then it can be resolved, into two components. The horizontal component on this surface is E sin θ.
For electrostatic situation
£ sin θ = 0
⇒ sin θ = 0
⇒ θ = 0°

So, the electric field is normal to surface.

Question 15.
Derive an expression for electric potential due to a point charge. Is it scalar or vector and why ?
Answer:
Consider a point charge q placed at origin O. Potential at P has to be found out. Let the medium between charge ‘q’ and P has dielectric constant Er. 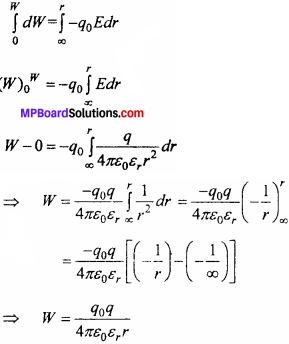 But electric potential is defined as work done per unit test charge.

4. Medium surrounding the conductor:
Due to presence of insulating medium near the charged conductor its potential will decrease. 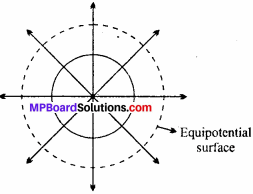 Question 18.
Obtain a relation between electric Held intensity and potential difference.
Or
Prove that E = \(\frac { dv }{ dr }\)where symbols have their usual meanings.
Answer:
Suppose A and B are two points in the electric field of charge q. The direction of electric field is radially outwards from A to B. Suppose the distance between A and B is very small (i. e., dr) then the electrie field between A and B can be taken as uniform. As the potential is inversely proportional to distance hence potential at A is more than that of B. Let the potential at B is V then that at A is V + dV.

Work done in bringing the test charge q0 from B to A is –
dW = q0dV …….(1)
Force acting on q0 will be
F = q0 E
Work done in bringing the test charge against the repulsion force will be
dW = -q0Edr
(Work = Force x Displacement) ………(2)
The negative sign shows that the direction of displacement and direction of force are opposite to each other.
From eqns. (1) and (2), we get,
q0dV = q0Edr
or dV = -Edr
E = – \(\frac { dv }{ dr }\)
This is required relation between intensity of electric field and potential difference. 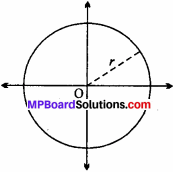 Capacity of an isolated spherical conductor:
Let us consider about a spherical conductor of radius r. The charge + Q is given to it. The charge will be distributed on its surface uni- formly. Therefore the lines of force will be emitted normally to the surface seem to becoming from its center. Hence, we can suppose that all the charges are kept at the centre.
∴ Potential on the surface V = \(\frac{1}{4 \pi \varepsilon_{0}} \frac{Q}{r}\)
But capacity C = \(\frac { Q }{ V }\)
Putting the value of V, we get
C = \(\frac{Q}{\frac{1}{4 \pi \varepsilon_{0}} \frac{Q}{r}}\)
C = 4πE0r
C ∝ r.
Thus, the capacity is proportional to the radius of the spherical conductor.

Question 20.
What do you mean by a capacitor ? Explain its principle.
Answer:
The capacitor is a device by which the capacitance of a conductor is increased without changing its size or volume. Actually it stores electrical energy.
Principle of capacitor:
Let A be a charged conducting plate. Another uncharged conductor plate B is brought near to A, therefore due to induction negative charges will be induced on the front surface and positive charges on the other side of plate B.
Now, the negative charge reduces the potential while the positive charge increases. 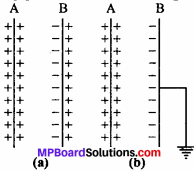 Question 21.
Derive an expression for parallel plate capacitor.
Answer;
Let A and B be two plates of a parallel plate capacitor separated by a distance d apart. Area of each plate is A and dielectric constant of the medium between them is Er Now, plate A is given + Q charge. Therefore, – Q charge will be induced on the nearer surface of the plate B and + Q charge on the other side. As B is connected to earth, + Q charge of B will go to earth. Let the charge density of A is cr, therefore that of B will be -σ. 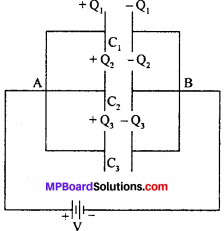 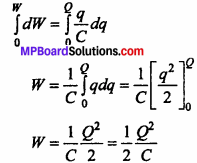 Question 25.
Prove that on connecting two charged conductors, charges distribute on them according to their capacities.
Answer:
When two isolated charged conductors A and B are connected by a thin wire, charge flows from the conductors at high potential to the conductor at low potential till the potential of both A and B became equal. The phenomenon involved is called distribution of charges and the total charge of the entire system remains conserved. Let the capacitance of A and B be C1 and C2, the charges be Q1 and Q2 respectively. Then the potentials are V1 and V2 respectively.
∴ Initially, Q1 = C1V1 and Q2 = C2V2

When the conductors are joined, then the charges get distributed in the ratio of their capacities.

This is the required expression. 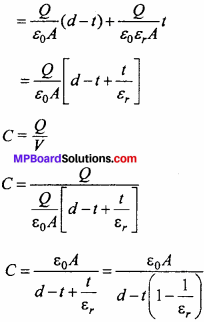 This is the required expression.
Metal is a conductor. When metal is used in place of the dielectric, it will conduct electricity and the potential difference will become zero. So, capacitor will not work.

(2) Loss of energy: Total energy of the conductors before connection:

and total energy after connection, 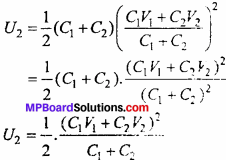 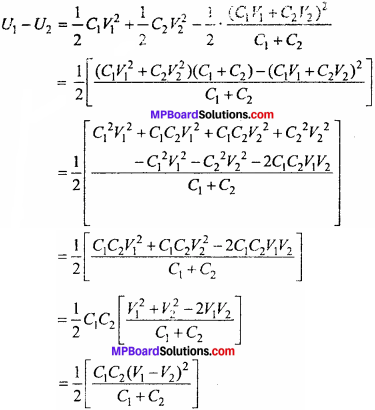 Question 3.
Explain the construction and working of Van de Graaff generator. Write its uses.
Answer:
Van de Graaff generator is a machine which produces electricity of about 107 V or more potential difference.
Construction:
It consists of a large metallic sphere S of diameter 5 m, mounted on high insulating support PP about 15 m high. An endless insulating belt made up of rubber passes over the pulleys p1 and P2. A motor rotates p1 C1 and C2 are two metallic combs called spray comb and collecting comb respectively. C1 is connected to S. To prevent the leakage of charge, the generator is put inside a large enclosure filled with gas at 15 atm. pressure. This iron enclosure is connected to earth. 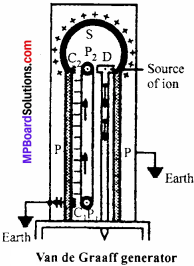 Working:
The comb C1 is connected to the positive terminal of the battery, therefore the surface density of the points becomes very high which causes the wind present nearby it to get charged. Thus, the spray comb sprays the charge on the belt. Now, the electric wind moves up to the collector comb C2 When it reaches in front of the collector comb C2 opposite charge induces on the tip to neutralize the same type of charge. The negative charge wind of C2, cancels the positive charge of the belt. Thus, by the repeated actions more and more positive charge is induced on sphere, hence its potential increases to about 107volts or more.

Question 4.
When Anil opened the cap of the tap, then he found no water in coming out of it. Then he opened the cap of the water tank and found no water in the tank. To fill up water in the water tank he switch on the switch of the motor and found motor is not starting. Then he called the electric technician. The technician said him on checking that the condenser of the motor is not functioning. On replacing capacitor, the motor start working.

Question 3.
A hollow metallic sphere of radius 0-1 m is given 6pC. Calculate its potential:

2. At the center:
Inside the sphere the potential remains same and equal to that on the surface hence V = 5 . 4 x 105volt.

Question 4.
A test charge is moved from A to B, B to C and A to C in an electric field E as shown in the figure :

Question 6.
How three capacitor of 3pF each can be combined such that their resultant capacity is :

Question 9.
Two charges 5 x 10-8C and -3 x 10-8C are located 16 cm apart At what point, on the line joining the two charges, is the electric potential zero ? Take the potential at infinity to be zero. (NCERT)
Solution:
Case I.
Let electric potential be zero at point C lying at distance x from the positive charge. 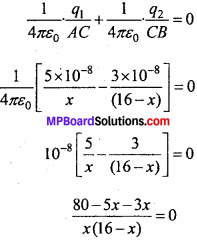 Case II.
The other possibility is that the point C may also lie on produced AB.

Question 10.
Determine the equivalent capacitance between A and B in the following circuits: 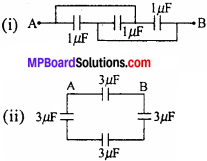 Solution:
(i). Mark the junctions as C and D.

(But C will be A and D will be B)
Draw the equivalent network, which is given below

(As A and B, the path is dislocated temporarily)
The capacitors in P -II are in series. So, the equivalent becomes