Question 3.
Answer in one word/sentence:

Question 5.
What is the value of entropy when ice melts?
Answer:
Entropy increases.

Question 6.
What is Closed system?
Answer:
System which can exchange energy only and not matter with the surroundings.

Question 7.
The value of which enthalpy is always negative?
Answer:
Enthalpy of combustion.

Question 9.
What is Adiabatic process?
Answer:
A process in which no exchange of heat between system and surroundings occur is known as adiabatic process.

Question 10.
What is Enthalpy?
Answer:
Heat change at constant pressure is known as enthalpy.

Question 11.
The process in which pressure remains constant is called?
Answer:
Isobaric process.

Question 12.
In Exothermic reaction the value of ∆H is?
Answer:
Negative.

Question 13.
Unit of specific heat capacity is?
Answer:
joule per kelvin per gm.

Question 17.
What is the unit of molar heat capacity?
Answer:
joule kelvin-1 mol-1.

Question 19.
The efficiency of any fuel is measured by which value?
Answer:
Calorific value.

Question 20.
What is entropy?
Answer:
The measurement of degree of disorder or randomness of the molecule of the system.

Question 23.
“The electricity obtained from an electrochemical ceil is equivalent to decrease in free energy”. Write expression for this sentence?
Answer:
∆G° = -nE°F.

Question 1.
What is System?
Answer:
System:
A specified portion of the universe which is selected for experimental or theoretical investigations is called the system. (MPBoardSolutions.com) In the system, the effects of certain properties such as pressure, temperature, etc. are observed. A system is said to be homogeneous if it consists of only one phase. On the other hand, it is heterogeneous if it consists of more than one phase.

Question 3.
Explain Exothermic reaction with example?
Or, Explain why the value of enthalpy change negative for exothermic reaction?
Answer:
The reactions in which heat is emitted are called exothermic reactions. In such reactions total heat content of products is less than that of reactants. Hence, ∆H is negative.
Example: 2NO(g) → N2(g) + O2(g); ∆H = – 180.5 kJ/mol.

Question 10.
Define the term Entropy?
Answer:
A change that brings about disorder or randomness is more likely to occur than one that brings about order. To account for the randomness or disorder of a system a state function called entropy was introduced. It is (MPBoardSolutions.com) defined as the measure of degree of disorder or randomness of the molecule of the system. Entropy is represented by symbol S. It is easier to define entropy change than entropy of a system.

Question 12.
Among NaCl, H2O and NH3 whose entropy will be maximum and why?
Answer:
Entropy is the measure of randomness. In solid state the molecules are regularly arranged, so entropy is minimum whereas in gas the molecules move randomly in all directions, so the entropy is maximum. So, in the above example, NaCl is a solid, H2O is liquid and NH3 is a gas. So, the entropy of NH3 is maximum and entropy of NaCl is minimum.

Question 17.
Write Hess’s law?
Answer:
In 1840, G.H. Hess formulated a law known as Hess’s law. According to law, “The enthalpy change in a physical or chemical change is same whether the process is carried out in one step or in several steps.”

Question 18.
What is Adiabatic process?
Answer:
A process in which no exchange of heat between system and surroundings occur is known as adiabatic process. This process mainly occurs in isolated system. For this type of process dq = 0.

Question 20.
What is enthalpy of solution? Explain with example?
Answer:
Enthalpy change taking place during the dissolution of one mole of a substance in excess of a solvent such that further addition of solvent does not produce any heat change is known as enthalpy of solution.
Example: KCl(s) + aq → KCl(aq)

Question 21.
What is enthalpy of hydration? Explain with example?
Answer:
Enthalpy change taking place when one mole of anhydrous salt combines with the required number of moles of water to form hydrated salt is called enthalpy of hydration.
Example: CuSO4(s) + 5H2O(l) → CuS04.5H2O ∆H = – 78.2kJ.

Question 1.
What is law of energy conservation? Write its mathematical expression. Or, What is the first law of thermodynamics? Deduce its mathematical expression?
Answer:
This law was first expressed by Meyer and Helmholt. According to this law, “Energy cannot be created or destroyed although one form and vice – versa”.
Or
Whenever a certain quantity of energy in one form disappear, an equivalent amount of energy in another form reappear.

Heat of reaction:
Enthalpy change taking place when number of moles of reactants as represented by the chemical equation have completely reacted is known as enthalpy of reaction. It is denoted by ∆Hf.
Example: C(s) + O2(g) → CO2(g); ∆Hf = – 393.5 kJ/mol

Question 10.
What is Internal Energy? Is its absolute value can be determined?
Answer:
Physical and chemical process occurs by some energy change. This energy may appear in the form of light, heat and work. (MPBoardSolutions.com) This evolution and absorption of energy clearly shows that every’ substance or system is associated with some definite amount of inherent energy’. The actual value of this inherent energy depends upon: 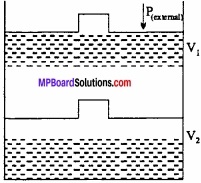 Question 12.
An ideal gas filled in a cylinder (according to figure.) is compressed in a single step with external pressure P(external) Then what will be the work done on the gas? Explain with graph?
Solution:
Let the initial volume of the gas is Vi and pressure of cylinder is P. On compressing the gas by pressure P the final volume of gas is Vf.
So, change in volume ∆V = (Vf – Vi)
If W is the work done by the piston on the system
W = P(external) (- ∆V)
W = P(external) (Vf – Vi)
This can be shown in the figure by (P – V) graph, The work done is equal to ABVfVi. The positive sign shows that the work is done on the system. 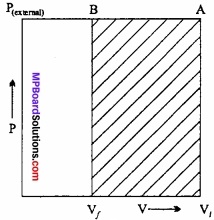 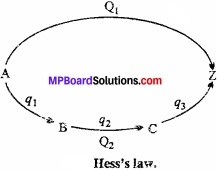 Where, Q1 is the energy in several steps:
A → B + q1
B → C + q2
C → Z + q3
Total energy evolved in several steps = q1 + q2 + q3
= Q2 calories (suppose)
Acoording to Hess’s law,
Q1 = Q2
Suppose Hess’s law is incorrect and Q2 > Q1. In this stage if we convert A to Z by several steps and then Z directly to A, then heat equal to (Q2 – Q1) is produced. By repeating this cyclic process several times, an (MPBoardSolutions.com) unlimited amount of heat (energy) may be produced in an isolated system. But this is against the law of conservation of energy.
Practically also, Hess’s law is proved to be true.
Example: Carbon can be directly burnt to produce C02 or in the second method it is first converted to carbon monoxide and then oxidized to carbon dioxide.

Energy evolved by both the methods is nearly same. Different of 0.3 kcal is due to experimental error.
∴ ∆H = ∆H1 + ∆H2

Question 3.
Deduce an expression for PV work done?
Answer:
Let us, consider a cylinder, fitted with a weightless, frictionless piston having a cross – sectional area A, filled with 1 mole of an ideal gas. The total volume of gas is Vi and pressure inside the cylinder is Pin.
Suppose, external pressure on the gas is Pex which is slightly greater than the internal pressure of the gas. (MPBoardSolutions.com) Due to this difference in pressure the gas is compressed till the pressure inside becomes equal to Pex Suppose, the change is achieved in one single step and the final volume of the gas is Vf The gas is compressed and suppose the piston moves a distance l. Work done during compression is
W = Force × Displacement = F × l

The negative sign in the expression is required to obtain conventional sign W. In compression, Vf < Vi and therefore, (Vf – Vi) or ∆V is – ve.
Hence, W will come out to be +ve from the above expression. In expansion type work Vf > Vi and value of ∆V is positive, therefore, work done will be negative.

This expression is useful for all types of PVwork and for irreversible flow.
Now, we will calculate, the work done during expansion of ideal gas in a reversible manner and in isothermal condition. 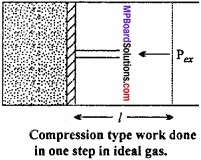 Question 5.
Explain the determination of internal energy ∆U by Bomb calorimeter under the following heads:

Answer:
Experimental determination of change in internal energy:
The change in internal energy in a chemical reaction is determined with the help of an apparatus called bomb calorimeter. (MPBoardSolutions.com) It is made up of steel so that it can bear high pressure developed during the chemical reaction taking place in the calorimeter. The inner side of the steel vessel is coated with some non – oxidizable metal like Pt or Au. It is also fitted with a pressure tight screw – cap. The two electrodes are connected to each other through a platinum wire dipped in a platinum cup.

A small known mass of the substance under investigation is taken in the platinum cup. The bomb is filled with excess of oxygen under a pressure of 20 – 25 atm and sealed. Now it is kept in an insulated water – bath which contains a known amount of water. The water – bath is also provided with a thermometer and mechanical stirrer.

The initial temperature of water is noted and the reaction (i.e., combustion of the sample) is started by passing an electric current through the Pt wire. (MPBoardSolutions.com) The heat evolved during the chemical reaction raises the temperature of water which is recorded by the thermometer. When rise in temperature and the heat capacity of the calorimeter are known, the amount of heat evolved in the chemical reaction can be calculated. This will be equal to the change in internal energy (∆E) of the reaction. 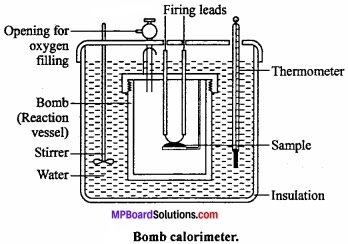