Question 5.
Answer the following in one word/sentence :

Budget is of two types:

Question 3.
What is tax?
Answer:
A tax is a compulsory contribution which is given by the people to the government in order to meet the expenditure on the welfare of the citizens.

Question 7.
What do you mean by vote on account?
Answer:
Special arrangement is made under which special power is vested with lok sabha to sanction some amount as advance till the financial budget is passed for the next year.

Question 8.
What is tax evasion?
Answer:
When people do not pay tax by hiding income it is called tax evasion.

1. Revenue receipts (Items of income) are of two types :

(A) Tax revenue : It includes all direct and indirect taxes which are imposed by the central government. For example, Income Tax, Corporation Tax, Production tax.

Question 2.
How inequalities in income can be removed through budget?
Or
What is the role of budget in removing income inequalities? (Delhi, All India 2011, Foreign 2012)
Answer:
Fiscal policy implies the income and expenditure policy or the budgetary policy of the government. It is a branch of public finance which deals with the types of financial statements made by any government about its probable revenue and expenditure during a given year.

Through their fiscal policies government can play a significant role in reducing inequality of income and wealth as well as inequality of opportunity. Both tax and spending policies can alter the distribution of income over both short term and medium term. Government need to reform the policies by imposing more taxes oh riches sections and to reduce the burden of tax on poor with the motive of economic welfare of the poor people.

Question 3.
Explain in brief how economic stability can be obtained by government budget? (All India 2011)
Answer:
Government budget is used to prevent business fluctuations of inflation or deflation to achieve the objective of economic stability. The government aims to control the different phases of business fluctuations through the budgetary policy. Policies of surplus budget during inflation and deficit budget during deflation helps to maintain stability of prices in the economy.

Question 4.
What is the role of government in Reallocation of Resources? Explain. (Delhi 2012)
Answer:
Through the budgetary policy, Government aims to reallocate resources in’ accordance with the economic and social priorities of the government. Government can influence allocations of resources through:

There is disequilibrium in the balance of payments when imports are more and exports are less. With demonitization of Indian rupee imports have become costlier, efforts can be made to make balance of payments favourable. But this cannot be done again and again because by this demand of our currency will decrease.

1. Developmental expenditure:
Under it we include those expenditure which are done for the economic development and social welfare of people. It includes education, medicine, industry agriculture, transportation roads, canals, water welfare, electricity etc.

2. Non – development expenditure:
This expenditure includes that expenditure which is done on administration, on security and legal procedure of the government. It includes salaries of police department, military department, interest on loans, pension etc.

3. Plan expenditure:
It includes expenditure to be incurred during the year on programmes under the five year plan by planning commission. In this expenditure investors and consumers both are included. For example, economic activities like agriculture, industry transportation, communication etc. It also includes social welfare activities like education, family welfare, information and communication, drinking water, cleanliness, health etc. 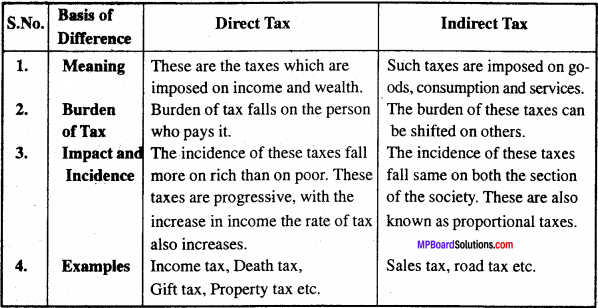 Question 9.
What do you mean by budget? Write its characteristics.
Answer:
Origin of the word in India:
The word ‘budget’ has been derived from the French word ‘Bougette’, which means small bag. It symbolizes a bag containing the financial proposals. In England, the chanceller used to bring economic proposals and statements in a bag; In 1773, finance minister of Britain, Robert Walpole opened his leather bag for the budget proposal to take place in Parliament. From that it becomes popular in India.

Question 10.
Write the objectives of budget.
Answer:
The objectives of budget are as follows :
1. Reallocation of financial resources:
The government reallocates the financial resources to achieve the desired goals. It is the primary responsibility of the government to build a sound socio – economic infrastructure regarding health housing, education and raising the standard of living of people. Government imposed more taxes on those items which are harmful for people on the other hand it may reduce the taxes which are useful from social point of view.

2. Removal of inequality of income and wealth:
Every nation tries to bring equality between the various sections of the people and to bridge the gap between poor and rich. Through subsidies, taxes government can remove their inequalities. The main objective of Budget is to fill the gap of rich and poor. 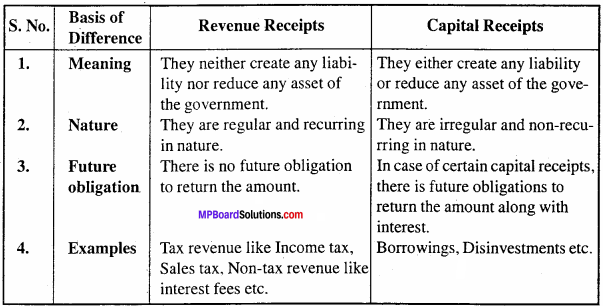 Question 13.
Write a note on Surplus budget, Balance budget and Deficit budget.
Answer:
A budget is the statement of the financial plan of the government for a financial year. It indicates the revenue expenditure estimates for the next financial year. The different types of budget are :

Question 14.
Does public debt impose a burden? Explain.
Answer:
Public debt does not impose a burden all the times. Only in the following situation, it imposes a burden. When government sectors to public debt, the government transfers the burden to reduce consumption on future generation, because the government may decide to pay off deut in future by raising taxes. Taxes reduce the savings and capital formation and growth. Thus, the debt acts as a burden on future generation.

Question 19.
What do you understand by Goods and Service Tax (G.S.T.)? How is G.S.T. better than old system of taxation? Explain its types.
Answer:
(a) The Goods and Services Tax (G.S.T.) is a value Added Tax (VAT) levied on most goods and services sold for domestic consumption. The G.S.T. is paid by consumers, but it is remitted to the government by the businesses selling the goods and services:

Question 2.
Explain the procedure of the budget.
Answer:
Under the budgetary procedure in India we can study the following heads:

2. Presentation of the budget : In India the budget is presented in two parts :

Rail budget is always present before the general budget. General budget presented on the last day of the month of February at 5 p.m. generally 28th in February.

3. Discussion on the budget:
Budget is put before the Parliament for discussion. In the processes of passing the budget, the discussions on various items continues for 3 – 4 days. Presently different committees are formed. For the discussion and finance minister gives his final reply on the budget.

4. Voting on budget:
After the general discussion the budget is put for voting. The members of parliament give their speeches for and against the budget before voting. There after voting is held for passing the budget.

6. Financial bill:
All the financial proposals for the coming year are included in a bill which is known as financial bill. This bill is generally presented immediately after the presentation of budget in the Lok Sabha. If this bill is not passed by the Parliament f ur government L not supposed to spend any amount.

7. Vote on account:
Special arrangement is made under which special power is vested with Lok shabha to snetion some amount as advance till the final budget is passed for the next year.

8. Implementation of budget:
After the budget is passed, it is implemented by the government for which the following steps are taken :

Audit by comptroller and Auditor General of India presents their report before the Parliament which comprise the receipt of revenue, expenditure, loans taken.

Question 3.
Write the tax revenue sources of Public Revenue:
Answer:
Following are the sources of Public Revenue :
Tax:
Taxes are neither a fees nor a penalty because it is neither taken by the government to give any additional benefits nor taken as a fine. Taxes are compulsory contribution which are given by the people to the government in order to meet the expenditure on the Welfare of the citizens.

Types of taxes : Taxes are of following types :

1. Fees, licence and permit:
Government gets non – tax revenue from fees licence fee and payment made for permits.

Licence and permit – Fee is that fee which is paid by people to government after giving permission by the government to the people to do something. For example: Driving licence, import licence etc.

2. Fines:
Fines are collected by the govt, for breaking rules of the country. The main aim of this is not to collect money but to teach people lesson about it.

3. Income from public enterprise: Government may raise funds from many sources like Railways, Postal department, Steel Plants fertilizer Corporations, Indian Oil department etc. Government sells products of it and gets profit from it.

4. Gifts and grants: The government may raise the funds from others. During calamities like flood, earthquake etc. citizens and some NGO’s give help to the government . For example : W.H.O., UNESCO etc. they give assistant also during this period.

5. Notes issues:
Sometimes government prints extra notes and increase the treasury. Reserve Bank of India has got the right of printing notes and minting coins.

7. Interest, receipts : Interest earned by  the government from the loans given to States, Union territories. Railways, Post and Telegraph are included in it.

8. Dividends: This includes the share from profits of various undertakings in which the central government has done investments example SAIL, ONGC etc.