In this article, we will share MP Board Class 8th Social Science Solutions Chapter 15 South America-Geographical Features Pdf, These solutions are solved subject experts from the latest edition books.

Mp Board Class 8 Social Science Chapter 15 Question 2.
Which is the lightest wood of South America?
(a) Valsa
(b) Hivia
(c) Sincona
(d) Highwood
Answer:
(a) Valsa

Mp Board Class 8 Science Solution Chapter 15 Question 2.
What do you mean by water divider?
Answer:
The highest mountain or plateau region where water of rivers flows in two opposite directions. The plateau of Guyana work as water divider between Amazon Basin and Orinoco Basin.

Class 8 Social Science Chapter 15 Question Answer Question 3.
What is Granchaco?
Answer:
In lower part of North Argentina and West Paraguay, there is a distinct dry period and the rain occurs mainly in summer. The region is covered with thick forest and grasslands and is locally known as the Granchaco.

Mention The Features Of The Andes Mountain Range Class 8 Science Chapter 15 Question 2.
Write the names of major trees of Amazon Basin?
Answer:
The Selvas forests of Amazon basin, have trees of rubbers, hardwood, Hivia, Casttillao, Sinkona, Rosewood and date. The rubber is made from the milk of rubber tree, Cunana is made from Sinkona and wax from Kamova date trees.

Mention The Water Borders Of India Class 8 Question 4.
How Pantagonic became desert?
Answer:
The Pantagonic Plateau having no rains. Therefore, it is a dry desert and it is situated in rain shadow area.

The conventional rains throughout the year here make the climate hot and humid. The most part here get 100 to 200 cm. rain, while few parts receive more than 200 cm. rain. The central part of continent, South Brazil, Paraguay and North Argentina’s low lands get rains in summer between 50 to 100 cm. and the winter is dry here.

South Peru and north Chile have hot and dry climate due to Atacama desert. There is scanty rain. Further south that is central Chile, has the Mediterranean type of climate, here winters are rainy and warm and dry summer. The climate of south Brazil is hot Mediterranean. Climate of Patagonia is dry because it lies in the rain shadow area of the Western mountains.

Question 2.
Mention the features of Andes Mountain range?
Answer:
Parallel to the Western Coastal plain belt their lies a long range of mountains and hills. This is the longest Andes Mountain range of the world. Its length is 7250 Km. The width of the Mountains is too much in the central region.

There are high plateaus among these ranges. The inland mountain plateau of Bolivia is very high. The Titikaka Lake is situated on this plateau. High peaks are always covered with snow all the year. The highest peak of Andes is Akanka Gua, 6950 meter high from sea level.

The most active Volcano Cotopaxi is situated on the mm height of Andes in Equadore. The mountain range always experience of Volcano eruptions, Amazon, Orinoko, Pilkomoia and Colorado rivers originate from Andes mountain.

Question 3.
Write a note on the vegetation and wildlife of South America?
Answer:
Amazon Basin which has hot and humid climate and carried rains is full of hot Mediterranean forests. This region is covered with equatorial rain forests known as SELVAS.

The Selvas forests have trees of rubber, hard wood, Hivia, Casttilloa, Sinkona, Rosewood and
Date. There are 2500 species of fishes in the rivers and 1500 species of birds. Galepagora turtle is found on the sea coasts. The Makra Monkey, Squirrel Monkey, the Anaconda Python, the marshy deer, Hippopotamus, Chimpanzee and Crocodiles are found here.

In the south of the Amazon forest lies the savana type long grass plains they are known as LANOS in the Orinoco river basin and Campos in North Argentina and Paraguay. There are devours ants, Puma and Jaguar animals.

Part of Southern Peru and northern Chile have hot and desert type climate. There are shrubs, cactus and prickly pear. In extreme south of Chile there is oceanic type of Climate. Grasslands are useful for cattle and sheep rearing.

Question 4.
In which physical divisions South America have been divided. Describe anyone.
Answer:
South America is divided into following three divisions:

1.The Western Coastal Strip:
Consists of a narrow strip of low and long the pacific coast in the western part of South America.

2.The Western Mountains:
There is a mountainous range called Andes along the western part of South America. They are the young fold mountains only next to Himalaya Mountains. They are three main ranges in the Andes. Eastern sides of this area have two high ranges.

Between these mountains some plateaus are found. The Bolivian is one of them. Lake Titicaco is also located here. It is one of the largest lake of South America. Mt. Aconcagua is the highest peak as higher as 7021 meters above sea level of Andes. Mt. Cotopaxi in Equator is volcanic mountain of this region.

3.The Central Plain:
The Central Plain is made up of the basins of the Orinoco, the Amazon and Plato rivers.Amazon river which 6280 kilometers long takes the greatest volume of water in the world.

4.The Eastern Highlands:
Consists of Guyana and Brazilians Highlands. The highest waterfall of the world called Angel Fall is located here in the south-eastern part of Venezuela.

Show the following in the outline map of South America – 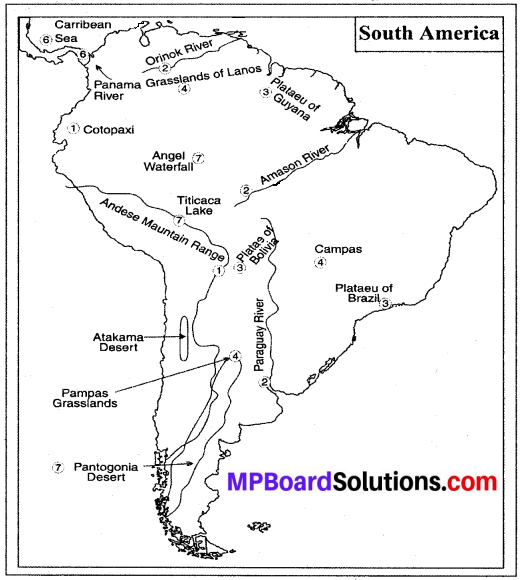