Question 2.
Which hybridization is present in ammonia (NH3)?
Answer:
sp3.

Question 3.
What is the reason for high boiling point of water?
Answer:
Presence of H – bond between molecules of water.

Question 4.
What is the dipole moment of C02?
Answer:
Zero.

Question 5.
What type of bonds are directional?
Answer:
Covalent bonds.

Question 9.
What is the structure of diamond?
Answer:
Crystal lattice (Tetrahedral).

Question 12.
What is full form of LCAO?
Answer:
Linear Combination of Atomic Orbitals.

Question 13.
What is the structure of NH3?
Answer:
Trigonal bipyramidal.

Question 14.
What is dipole moment (µ) of a linear covalent molecule?
Answer:
Zero.

Question 15.
What is the unit of electron gain enthalpy?
Answer:
eV per atom or kJ per mole.

Question 18.
What do you mean by bond order?
Answer:
The number of electrons present between two atoms of molecules or ions.

Question 2.
What do you mean by lone pair of electron?
Answer:
The electron pair which present in the valence orbital of the element and does not take part bond formation is called lone pair electron.
Example: In the H2O atom the lone pairs of electrons on an atom:

Question 4.
Is He2 molecule is possible? Clearify it.
Answer:
He2 molecule is not possible.
2He → 1s2
Two electrons are present in Is orbital of He atom. It is complete and stable orbital and so it cannot accept an extra electron. The bond order is zero. So the formation of He2 molecule is impossible.

Question 5.
What is the total number of σ (sigma) and π (pi) bond are present in following molecules:

Question 11.
C – Cl bond is polar but CCl4 is non – polar, why? Give the reason?
Answer:
In C – Cl bond the electronegativity of Cl is more than C, due to this the electrons in covalent bond shifts towards Cl, due to which partial +ve charge appears on C and partial -ve charge develops once and this bond become polar in nature. Whereas the structure of CCl4 is symmetric, due to which the dipole moment of C – Cl bond cancelled each other. So, CCl4 molecule is non – polar.

Question 12.
What do you mean by resonance?
Answer:
Some compounds cannot be represented by a single definite structure, rather more than one structure is required by none of them is able to explain all the known properties of the compound alone. Thus, the various structures written for a compound to explain the known properties of it completely are called resonating structure. This phenomenon is called resonance.

Question 17.
Write the definition of hybridization?
Answer:
The process of intermixing of atomic orbitals of nearly equal energy and proper symmetry giving rise to equal number of new orbitals of same energy is called hybridization and the orbitals so formed hybridized orbital.

Question 18.
What do you understand by lattice energy and solvation energy?
Answer:
Lattice energy:
Once the gaseous ions are formed, the ions of opposite charges come close together and pack up three – dimensionally in a definite geometric pattern to form ionic crystal (Crystal lattice). Since, the packing of ions of opposite charges takes place as a result of attractive force between them, the process is accompanied (MPBoardSolutions.com) with the release of energy referred to as lattice enthalpy. Lattice enthalpy may be defined as; the amount of energy released when one mole of ionic solid is formed by the close packing of its constituents. It is denoted by ∆LH and negative in nature. 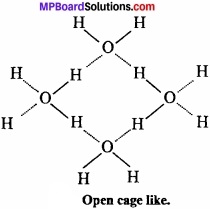 The molecules of H2O are not packed closely. This H gives rise to open cage like structure for ice having a larger volume for the given mass of water. Thus, density of ice is less than water. Ice is actually hydrogen bonded crystal. (MPBoardSolutions.com) Three dimensional structure of protein and nucleic acids like biologically important substances is due to hydrogen bond. Energy of hydrogen bond is between 3.5 kJmol-1 and 8 kJmol-1. Thus, hydrogen bond is stronger than van der Waals force and weaker than covalent bond.

Question 3.
Explain covalent bond with example?
Answer:
Lewis – Langmuir theory:
Lewis and Langmuir suggested that, atoms may combine by sharing of electrons in their outermost shell to complete their respective octet. The shared electrons becomes the property of both the atoms. This types of linkage is known as covalent linkage or covalent bond. Thus,

1. The force which binds atoms of same or different elements by mutual sharing of electrons is called a covalent bond.

2. This type of bond is formed between two similar non-metalic elements (A, A) or (B, B) or dissimilar atoms (A and B).
Example:
Chlorine molecule:
Both the chlorine atoms (Z = 17) contain 7 electrons in their valence shells and short in one electron each. They share one electron pair in which an electron is contributed by both as shown below:

Question 4.
Differentiate between atom and ion?
Answer:
Differences between Atom and Ion:
Atom: 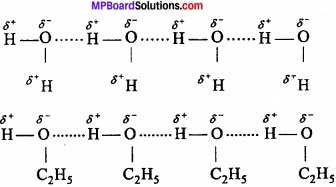 Question 11.
What are the postulates of orbital overlap concept of covalent bond?
Answer:
According to this concept:
1. The covalent bond is formed due to partial overlap of the two half-filled atomic orbitals of the valence shells of the combining atoms. Partial overlap means that a part of the electron cloud of each of the two half – filled domic orbitals becomes common. As a result the probability of finding electrons in the region of overlap is much more at the other places. This reduces the intemuclear repulsion and hence decreases the energy.

2. The orbitals undergoing overlap must have electrons with opposite spins.

3. Greater the extent of overlapping, stronger is the bond formed.

4. Larger the size of the orbitals, less effective is the overlapping and thus weaker is the bond formed.

Question 12.
Explain that the geometry of PCl5 is trigonal bipyramidal and that of IF5 is pyramidal?
Answer:
PCl5: P is central metal atom.

As P in PCl5 in sp3d hybridized so its geometry is square pyramidal.
IF5: Central Metal atom is I (Z = 53)

Question 13.
What are σ bond and π bond? Explain with example?
Answer:
Hybridization is defined as, “The process of intermixing of atomic orbitals of nearly equal energy and proper symmetry giving rise to equal number of new orbitals of same energy is called hybridization and the orbitals so formed hybridized orbitals.”

Sigma bond:
The bond formed by overlapping of two orbitals along their axis is called a sigma (σ) bond. The line joining the two nuclei of the combining atoms is called the intemuclear axis or bond axis.
Example: This type of overlapping takes place between s – s orbital, s – p orbital and pz – pz orbitals.

It is important to note that overlapping at both the lobes of the p – orbital occurs in Pi – bond whereas in case of sigma bond the overlap occurs in a single region.

Question 14.
Give the reason for the difference in properties of two allotropes diamond and graphite of carbon?
Answer:
Diamond and graphite are two allotropes of carbon. But due to difference in C arrangement their properties are different. In diamond the C atom is sp3 hybridized. Every C atom attached with four cations form tetrahedral geometry. So it forms a lattice structure and so hard and have high melting point.

In graphite every C atom is sp2 hybridized, i.e. each C is surrounded by three cations and fourth valency of C is unstable. In graphite different layers are present which are joined together with weak vander Waals’ forces. That is why graphite is soft and due to presence of free electron it conducts electricity.

Question 15.
Explain the hybridized structure of acetylene by diagram?
Answer:
Formation of ethyne or acetylene (HC = CH): In the formation of acetylene molecule, each carbon atom undergoes ip – hybridization leaving two 2p – orbitals in the original unhybridized state. The two sp – hybrid orbitals of carbon atom are linear and are directed at an angle of 180°. Whereas the two unhybridized p – orbitals remain perpendicular to ip – hybrid orbital and also perpendicular to each other.

Question 17.
On the basis of hybridization explain that the structure of BeCl2 is linear?
Answer:
Formation of BeCl2:
In the compound (BeF2, BeCl2, etc.), beryllium shows a covalency of two. In order to explain the formation of two equivalent bonds with beryllium its 25 – electron from the ground state (4Be, Is2 2s2) is excited to 2p – orbital (1s22s1 2p1]) 2s and 2p – orbitals get mixed up to two equivalent sp – hybrid orbitals which make an angle of 180° with each other and oriented linearly. Each sp – orbitals overlap with half – filled p – orbital of chlorine (1s2 2s2 2p6 3s2 3px2 3py2 3pz1) atoms to form two sigma bonds. Thus, the shape of BeCl2 is linear.

When 2px orbital of each nitrogen atom overlaps co – axially, a σ – bond is formed. The 2py and 2pz orbitals of one N atom overlap N atom to overlap laterally to form two π – bonds.

2. There should be maximum overlap of atomic orbitals:
Greater the overlap, greater will be the charge density between the nuclei of a molecular orbital. This condition is often referred to as the principle of maximum overlap.

Question 4.
On what factors the formation of ionic bond depends?
Answer:
Factors influencing Ionic Bond formation:
The formation of ionic bond (Electrostatic force of attraction) depends upon the following factors:
1. Ionisation enthalpy:
One of the combining atoms (metal) must have low ionisa-tion enthalpy. So that, cation formation becomes easy. For example, alkali and alkaline earth metals of periodic table has tendency to form positive ion because they have comparatively low ionisation energy.

3. Lattice energy:
The amount of energy released when one mole of ionic solid is formed by the close packing of its constituents. It is denoted by ∆LH and negative in nature.
A(g)+ + B(g)– → A+B(s)– + Lattice enthalpy (∆LH)
Thus, greater the magnitude of -ve lattice energy, more will be the stability of the ionic bond or ionic compound. 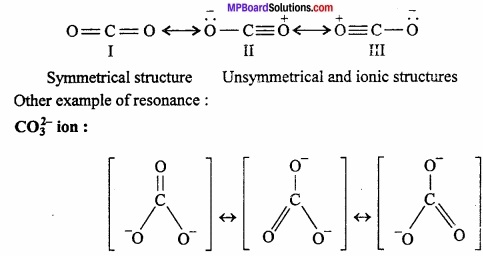 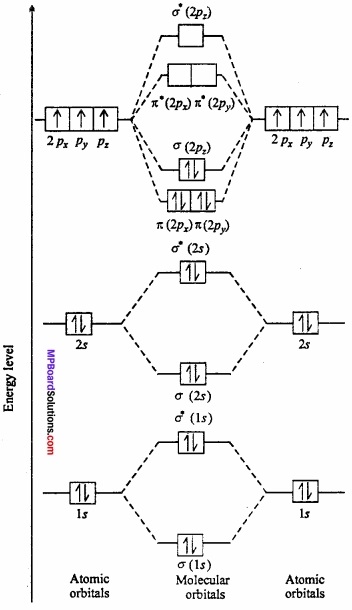 Molecular orbital structure of N2 molecule will be as follows:

2. Predicting the nature of molecules:
Molecules with specific dipole moments are polar in nature while those with zero value are non – polar. Thus, BeF2 (µ – 0D) is non – polar while H2O (µ = 1.84D) is polar.

4. Dipole moment of symmetric molecules is zero, but they have two or more than two polar bonds. It is applied for the measurement of symmetry.

5. Distinction between ortho, meta and para isomers of aromatic compounds:
In general, the dipole moments follow the order: ortho > meta > para e.g., In dichlorobenzene, the dipole moments of o, m and p isomers are: 2.54 D, 1.48 D and 0 respectively.

Shapes of some molecules accroding to VSEPR theory:
1. Shape of CH4:
In methane, central atom carbon is surrounded by four electron pairs and four C – H bonds. This molecule has tetrahedral geometry. Shared electrons are at the comers of tetrahedron for maximum separation. Bond angle is 109°28′. 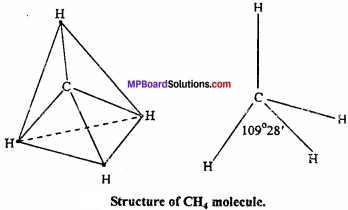 2. Shape of H2O:
In water molecule central oxygen atom is surrounded by four electron pairs, two of which are lone pair of electrons. Thus, Ip – lp and lp – bp repulsion exist. Due to this, bond angle reduces to 104.5° in place of 109°28′ and shape becomes V shaped. 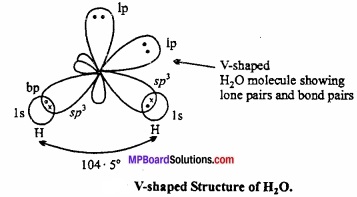 3. Shape of NH3:
In ammonia, central N atom is surrounded by four electron pairs, so shape of molecule is tetrahedral. According to VSEPR theory, the four groups around the central atom of ammonia should be tetrahedrally arranged at bond angle of 109°28’. 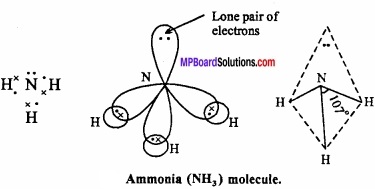 Limitations of VSEPR theory:
VSEPR theory no doubt, theoretically gives the shapes of simple molecules but could not explain them and also has limited application. To overcome these limitations, two important theories based on quantum mechanical principles are commonly used. These are:

Question 4.
Structure of two molecules are given: 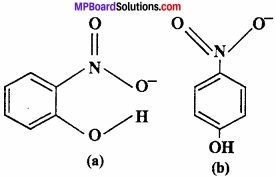 In compound (b) inter molecular H – bond forms.
In p – nitrophenol [(b)] between – N02 and – OH vacant space is present. So among H – atom of one molecule and O – atom of another molecule, H – bond is formed.

2. The melting point of compound (b) is high because many molecules are forming H – bond.

Its molecular orbital diagram is: 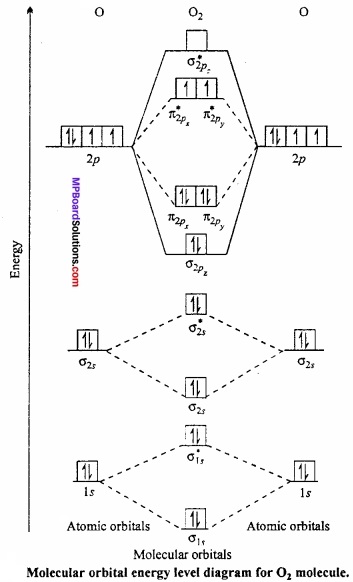