Check out the topics covered in Chapter before you start your preparation. Improve your grammar skills with the help of MP Board Class 8th English Chapter 4 The Narmada: The Lifeline of Madhya Pradesh Questions and Answers pdf links. The solutions for MP Board Class 8th English Textbook are prepared by the English experts. This helps to improve your communication skills.

The Narmada: The Lifeline of Madhya Pradesh Textual Exercise

(A) Make words by adding suffixes as given in the example.

(b) Rearrange the jumbled letters to form words:

(A) Answer the following questions :

The Narmada The Lifeline Of Madhya Pradesh MP Board Class 8 Question 1.
Name some of the holy rivers of the country mentioned in the lesson.
Answer:
The Ganga, the Yamuna, the Brahmaputra, the Sindhu, the Godawari, the Kavari, the Krishna, the Satluj.

Class 8 English Chapter 4 Mp Board Question 4.
What is the meaning of ‘Narmada’?
Answer:
The word ‘Narmada’ means one who soothes and gives pleasures to all.

Class 8 English Chapter 4 The Narmada MP Board Question 5.
What blessing did Lord Shiva give to Narmada?
Answer:
Lord Shiva granted Narmada’s wishes. He blessed her that she would remain maiden and would flow free and pure forever.

Narmada The Lifeline Of Madhya Pradesh MP Board Class 8 Question 6.
What are the places the Narmada flows through ?
Answer:
Narsinghpur, Raisen, Hoshangabad, Handia and Nemawar.

Lifeline Of Madhya Pradesh MP Board Class 8 Question 7.
What is Maheshwar famous for ?
Answer:
The humble palace of Devi Ahilya Bai is located at the ghat of Maheshwar.

(A) See the use of ‘among’ and ‘between’ in the following sentences:

Now fill in the blanks with between or among: 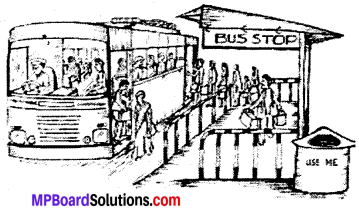 Choose any one river and talk about it in your group, with the help of the following clues :

According to Indian mythology, King Sagar, an ancestor of Lord Ram decided to perform a hundred Ashwamedha Yagnas. He completed ninetynine Yagnas and it was the hundredth when the horse of the Yagna got stolen by Devraja Indra. A great search for the horse was made. Ultimately Indra left the horse in the ashram of Kapil Muni. It was found by the sones of King Sagar. They insulted the Muni, thinking that it was he who had brought the horse there. Kapil Muni rose from his deep meditation and his anger soon turned down the sons of Sagar into ashes.

King Sagar had one more son Anshuman from his second queen. After his father, King Anshuman decided to make the Ganga descend on earth and immerse in it the ashes of his brothers so that their souls could rest in heaven. He started great Tapa, (severe penance) for this. After his death, his son King Dilip did similar Tapa to please the Ganga but could not succeed. After king Dilip his King Bhagirath continued the Tapa. Thus it was the third generation undergoing penance to please the Ganga.

The fierce penance of King Bhagirath pleased the Ganga. She appeared before him, and, blessing him, asked who would bear her force and current. King Bhagirath prayed to Lord Shiva to come for his help. Lord Shiva caught the powerful current of the Ganga in the locks of hair on his head. He tied her too tight to come out Again Bhagirath prayed to him to release the holy current. When she was released, she violently flowed after the chariot of Bhagirath. On her way came the ashram of Janhu Muni, and it too was swept away in the strong current. The Muni got furious and drank the whole of its water and dried the river up. Once again King Bhagirath had to pray to the Muni, and he released the Ganga from his thigh. Thus she was called Janhavi, the daughter of Janhu Muni.

Onward she continued her journey to the Gangasagar and ultimately reached the ashes of the sons of King Sagar.

The Narmada The Lifeline Of Madhya Pradesh In Hindi MP Board Class 8 Question 1.
Who was king Sagar ?
Answer:
King Sagar was an ancestor of Lord Ram who decided to perform a hundred Ashwamedha Yagnas.

Question 6.
Give another title to the above passage.
Answer:
The Ganga and the sons of King Sagar.

You know that the rivers are very much polluted these days. Even the Ganga needs to be cleaned. Suggest how we can keep the rivers clean. Use the following clues :

People pollute the rivers by throwing, garbage, wastes and other things in them Some orthodox people immerse the dead bodies of their family members into the river water to perform the last rites. The chemical wastes of the factories are also thrown into the river water. Village people excrete near the river. People, make the river water dirty by washing their clothes on the bank. They also let their cattle bathe in the rivers.

At times idols of clay and plaster of paris are immersed in the river, which make the water dirty.

Question.
See the map of Madhya Pradesh. Find out the names of the rivers shown in it and list them below.
Answer:
Narmada Tapi Chambal.

The Narmada: The Lifeline of Madhya Pradesh Word Meanings

The main aim is to share the knowledge and help the students of Class 8th to secure the best score in their final exams. Use the concepts of MP Board Class 8th English Chapter 4 The Narmada: The Lifeline of Madhya Pradesh Questions and Answers in Real time to enhance your skills. If you have any doubts you can post your comments in the comment section, We will clarify your doubts as soon as possible without any delay.