chose the correct option of the following

Chapter 3 Social Science Class 8 Question 1.
When and where Khol uprising took place?
Answer:
The kohl led Budho Bhagat Bharat lanched revolit in 1831 in singhbham ranchi palamu hajari bagh manbhumi and other pleces the kohls protested against their landas given to muslim and sikh peasants.

Mp Board Class 8 Science Solution Chapter 3 Questions 2.
Name the places of India where 1857 struggle was ‘widespread?
Answer:
The places where the 1857 struggle was wide spread were Delhi. Awadh. Rohilkhand. Bundelkhand Allbhahad, Agra Meerut. Kanpur and jhansi.

Social Science Class 8 Chapter 3 Question 1.
Describe the Santh:il uprising?’
Answer:
The Snthal revolt was led by Santhal leaders and sido and Kanhu in 1856. It was one of the most power ful uprisings. ‘The opposed the maltreatment up-rings they opposed the maltrrement of lands revenu offioal in daman -e- koh area this area lies between Bhagalpur and Rajmahahal the santhals declared end of the company rule in their region and revolt and were later suppressed by Britisher’s.

Class 8 Social Science Chapter 3 Question 2.
What were the causes of resentment among sepoys
Answer:
The causes of discontent among the Indian soldiers of the British army were as under:

Question 4.
Write notes on:
1. sanyasis upring
2. Whabi upring
Answer:
1. sanyasis upring:
this upring was important among other civil up-rings. the apathy of British government after 1770 famine in Bengal economic loot and ban on religious they attacked fractious colonies and forts of the company governor General Warren Hastings could brought the revolt under control.

2. Whabi upspring :
sayyed Ahmed of Railbareilly led the Wahhabi And changes in Islam sayyed Ahwed launned revolt against sikh rule in Punjab and when company took control over Punjab in 1849 Wahhabi raised rebellion against British rule got most powerful challenge from Wahhabi struggle.

Question 5.
make an album with the help of leaders who participated in 1857 struggle.
Answer: 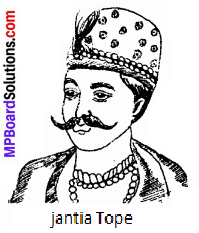 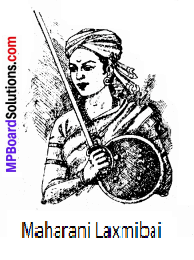 Question 6.
South major regions of 1857 struggle in the out line map of India.
Answer: 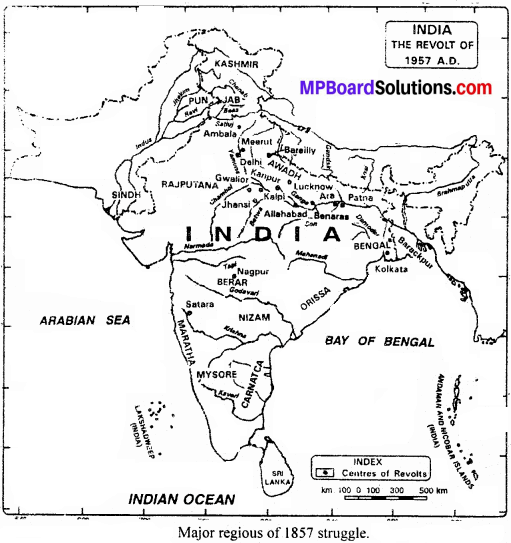