In this article, we will share MP Board Class 7th Social Science Solutions Chapter 10 Air Pressure and Wind Pdf, These solutions are solved subject experts from the latest edition books.

Social Science Class 7 Chapter 10 Mp Board Question 1.
What is a Barometer used for?
Answer:
A Barometer is used for measuring die pressure of the air.

Mp Board Class 7 Science Chapter 10  Question 4.
What do you mean by monsoon winds?
Answer:
The moist air that blows during specific seasons is known as monsoon winds.

Chapter 10 Social Science Class 7 Mp Board Question 5.
What is Farrell’s law?
Answer:
Ferrel’s Law – A scientist named Ferrel had proved that ‘Due to earth’s rotation, winds and oceanic currents turn towards right in the northern hemisphere and towards left in the southern hemisphere.

Class 7th Sst Chapter 10 Mp Board Question 1.
What are winds? Differentiate between air and wind.
Answer:
Winds are the natural horizontal movement of air over the earth’s surface.

Difference between air and wind: 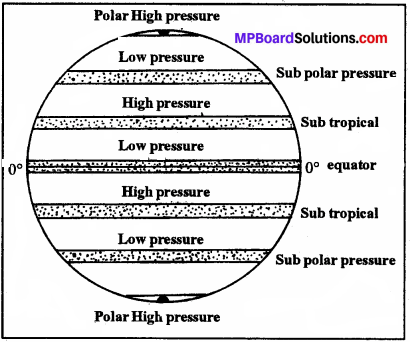 Class 7 History Chapter 10 Mp Board Question 3.
Describe the air pressure belts with the help of a diagram.
Answer:
The atmospheric pressure is not die same at all places on the earth’s surface. Generally, air pressure is classified into

Question 4.
What are cyclones and anti-cyclones? Explain with illustrations.
Answer:
Cyclone – A cyclone represents an area in which the low pressure is developed at the center and the same is surrounded by higher pressure outide. It often brings thundering, clouds and rain.

Anti Cyclone – Anti cyclone presents an area in which the light pressure is developed inside and the same is surrounded by low pressure outside. These winds bring no rain. The sky remains clear.
Illustrations: 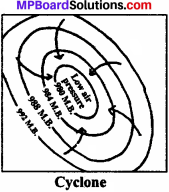 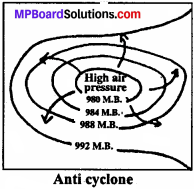 Question 5.
Describe the sea breeze and land breeze.
Answer:
Sea breeze:
During the day the land surface is quickly heated up while the water is relatively cool. The air over land gets heated, it becomes lighter so it rises up. It moves to fill the empty space. This movement of air is from sea to land so the wind is called sea breeze.

Sea breeze:
Land breeze – The land heats up faster and also cools down faster than the water. During the night, land becomes cool while the water remains comparatively hot. The hot air become light and starts rising. The cool breeze blowing from land fills up this empty space. As these winds blow from land to sea, they are known as land breeze.