Question 2.
Boojho wants to know how the male gamete in the pollen grain reaches the female gamete present in the ovule?
Answer:
The ovary contains one or more ovules.

Question 3.
Boojho wants to know why flowers are generally so colorful and fragrant. Is it to attract insects?
Answer:
Yes.

Activity – 1
Take a fresh potato. Observe the scars on it with the help of a magnifying glass. You may find buds in them. These scars are also called “eyes”. Cut a few pieces of a potato, each with an eye and bury them in the soil. Water the pieces regularly for a few days and observe their progress?
Answer: 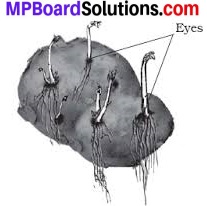 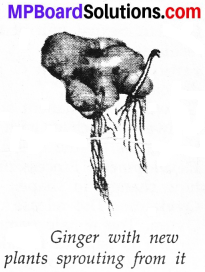 Question 1.
Fill in the blanks:

Question 5.
Sketch the reproductive parts of a flower?
Answer: 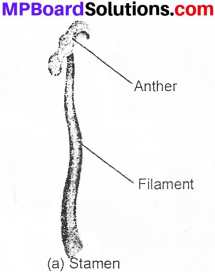 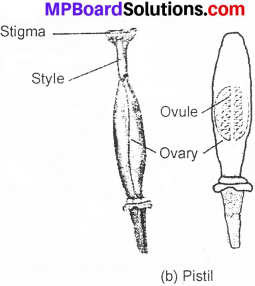 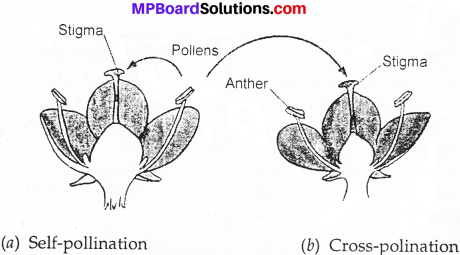 Question 7.
How does the process of fertilisation take place in flowers?
Answer:
Fertilization is the process in which male and female gametes fuse together. In flowering plants the pollen fuses with ovules present in the overy to form a zygote, which later on develops into seed. 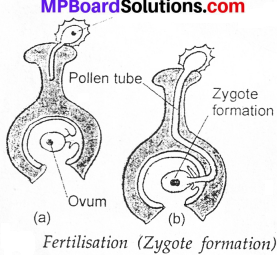 Question 8.
Describe the various ways by which seeds are dispersed?
Answer:
In nature same kind of plants grow at different places. This happens because seeds are dispersed to different places. Sometimes after a walk through a forest or a field or a park, we may have found seeds or fruits sticking to our clothes. Seeds and fruits of plants are carried away by wind, water and animals.

Winged seeds such as those of drumstick and maple [Fig.(a) and (b)], light seeds of grasses or hairy seeds of aak (Madar) and hairy fruit of sunflower [Fig. (a), (b)], get blown off with the wind to far away places. Some seeds are dispersed by water. These fruits or seeds usually develop floating ability in the form of spongy or fibrous outer coat as in coconut. Some seeds are dispersed by animals, especially spiny seeds with hooks which get attached to the bodies of animals and are carried to distant places. Examples are Xanthium and Urena. 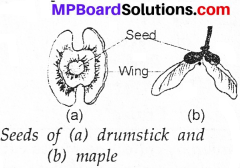 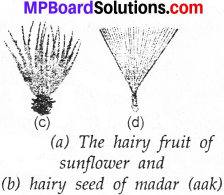 Some seeds are dispersed when the fruits burst with sudden jerks. The seeds are scattered far from the parent plant. This happens in the case of castor and balsam. 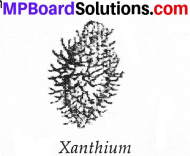 Question 1.
Make your own cactus garden by collecting pieces cut from different kinds of cacti. Grow the variety in one single flat container or in separate pots?
Answer:
Do yourself.

Question 2.
Visit a fruit market and collect as many local fruits as possible. If many fruits are not available, you can collect tomatoes and cucumbers (these are fruits, though we use them as vegetables). Make drawings of the different fruits. Split the fruits and examine the seeds within. Look for any special characteristics in the fruits and their seeds?
Answer:
Do yourself.

Question 3.
Think of ten different fruit – bearing plants. Remember that many vegetables are also fruits of the plants. Discuss with your teacher, parents, farmers, fruit growers and agricultural experts (if available nearby) and find out the manner of their dispersal. Present your data in the form of a table as shown below:

Question 4.
Suppose there is one member of a particular kind of organism in a culture dish, which doubles itself in one hour through asexual reproduction. Work out the number of members of that kind of organism which will be present in the culture dish after ten hours. Such a colony of individuals arising from one parent is called a “clone”?
Answer:
Do yourself.

Question (b)
The process of reaching pollen grains to stigma is called as …………………….
(a) pollination
(b) budding
(c) fission
(d) fertilisation.
Answer:
(a) pollination

Question (d)
Those living beings who have male and female reproductive organs differently are called ………………………….
(a) asexual
(b) bisexual
(c) unisexual
(d) None of these.
Answer:
(c) unisexual

Question (f)
Which one of the following organisms shows budding?
(a) Hydra
(b) Spirogyra
(c) Amoeba
(d) Paramecium.
Answer:
(a) Hydra

Question 4.
Match the items in Column A with Column B:

Question 2.
What is meant by reproduction?
Answer:
It is a process by which an organism gives birth to produce its own kind to maintain its species.

Question 4.
What is pollination?
Answer:
It is the process of transference of pollen grains from the stamens to the stigma of the carpel of flower.

Question 7.
What is growth?
Answer:
The process in which the change in size and shape of the organism along with the increase in weight is called growth.

Question 9.
What is the difference between sperm and ovum?
Answer:
Sperm is a male gamete while ovum is a female gamete. Sperm is mobile while ovum is non-mobile, the movement of sperm is attributed to mitochondria present in sperm.

Question 12.
How many types of gametes are there?
Answer:
Gametes are the fundamental units of reproduction. They are of two types :

Question 13.
What is fertilisation process?
Answer:
The fusion of male and female gametes to form a zygote during sexual reproduction is called fertilisation.

Question 1.
How do insects help in cross – pollination?
Answer:
Insects get attracted towards flowers either due to their bright color or fragrance or nectar. In the process of collecting nectar from flowers some of the pollens get stuck to their legs and body. If such an insect visits another flower, he transfers pollens to this flower and thus completes the process of cross-pollination.

Question 3.
What is budding?
Answer:
Budding is a type of a sexual reproduction in which an individual is produced as an out growth called bud from the parent organism. It takes place in certain animals like Hydra and in non green plant cells of yeast.

Question 4.
How do plants developed from a seed?
Answer:
The embryo inside the seed has two distinct parts. One part produces root system, and the other shoot system under favourable conditions of water, air, light and temperature. The root system developed under the soil and shoot system above the soil. Due to cell division elongation of different parts takes place and a new plant is obtained.

Examples of growth in animals:

1. Fertilisation:
The process of fusion of male and female gamete in sexual reproduction is called fertilisation.

2. Pollination:
The male part of plant is stamen. It consists of the filament and the anther. The anther has pollen grains.The female part is made up of stigma, style and ovary. The ovary has ovule. The stigma receives of pollen grains. The process of transfer of pollen from anther to stigma is known as pollination.

External fertilisation:
In some animals the female release ovum or egg outside and the male drops sperms on these. This type of fertilization is called external fertilization. The zygote so formal undergoes regular and specific changes with rime to form a new individual.

Pollination is the transfer of pollen grains from another to stigma of either the same flower (self pollination) or of another flower (cross pollination). The pollen grains are carried to the stigma by air, insects water in aquatic plants or by animals. Seed is the structure formed by the fusion of ovule and pollen grains in the ovary. The seeds germinate after their dispersion, into new plants.

Question 5.
Explain reproduction by spore formation in fungus with neat diagram?
Answer:
Spore formation:
You might have seen white powder like substance on leather objects during rainy season. These small particles are spores of fungus. Small spherical structures are in yeast, fungus, moss, fern and microbes during unfavourable circumstances. They have protective layer around them and remain floating in air. During favourable conditions, the protective layer breaks open and new organism is formed. 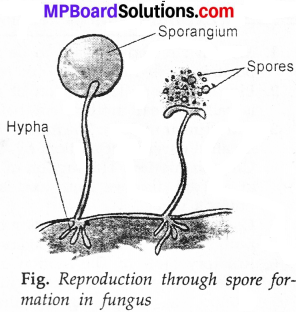 Question 6.
What are spores? When do they form?
Answer:
Several plants produce spores which germinate to produce new individual plants e.g., rhizopus, mucus and moss etc. It is the mechanism to overcome the unfavourable conditions. 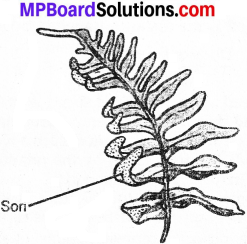