Question 1.
Question (a)
How does the sun get energy?
Answer:
The sun is burning like a big atomic power plant. The studies of scientists have shown that the sun is a burning body of inflammable gases in which hydrogen, helium and other gases bum and react continuously, producing heat and life for millions of years.

Question (c)
Explain the importance of the sun?
Answer:
Sun is the head of the solar system. It is situated in the centre of the solar system. All the planets, the satellites the asteroids, the meteorites and the comets revolve round the sun. All these members get light and energy from the sun. About 99% part of all the matter in the Solar System is constitute in the sun. The sun is so big that all the planets together would cover only 1% of it.

The sun has tremendous force of gravity due to its such a large sizes. It is due to the gravitational force that all the planets and the satellites regularly rotate round it. The sun is a big ball of fire. It is also a storehouse of light and energy. Our earth gets light and energy from the sun. Day occurs on earth due to the light from the sun.

Question (d)
Write the names of the planets in the solar system?
Answer:
The Sun and the nine planets which revolve around it make up the ‘Family of the Sun’ Solar System.

The Solar System consists of the Sun as the centre and Mercury, Venus, Earth, Mars, Jupiter, Saturn, Uranus, Neptune and Pluto as planets. In addition, there are in all 44 satellites in our Solar System. 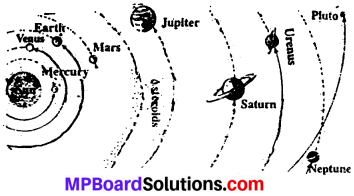 Question (b)
How is the earth a unique and living planet? Explain.
Answer:
The earth is a small member of the Solar System. It is the fifth in size of the nine major planets and the third in distance. But it occupies a very unique position in the Solar System, for the following reasons:

1.  Around the Earth is a gaseous envelope known as the atmosphere. It saves us from the extreme heat of the Sun.

2. The Earth has land, water and air unlike the other planets which makes life possible. All this had made the Earth a sweet home for us.

3. The other artificial satellites are the Rohini, Bhaskar, Apple, etc. They provide us a information system giving weather forecast, telecast, radio broadcast, telecommunication, information to improve agriculture and in-formation regarding minerals, etc.

4. The Moon is the only natural satellite of our planet. The moon moves around the earth and also around the sun along with the earth.The moon has rugged and barren surface. There is no air or water on the moon. It is very, hot during the day and very cold during the night.

Question 3.
Give one term for the following sentences: