Question 15.
In Nodal plan probability of finding an electron is:
(a) Zero
(b) One
(c) Maximum
(d) None of the these
Answer:
(a) Zero

Question 3.
Answer in one word/sentence:

Question 4.
Match the following:
[I] 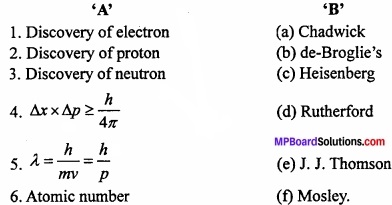 Question 2.
Number of orbital in f – subshell is?
Answer:
7.

Question 4.
What is the total number of orbitals for principal quantum number?
Answer:
n2

Question 5.
Which is the highest wavelength radiation?
Answer:
Radio wave.

Question 6.
What is the shape of orbital if the value of azimuthal quantum number is (1)?
Answer:
Dumbel.

Question 7.
The place surrounding the nucleus where the probability of finding of electron is maximum is?
Answer:
Orbital.

Question 15.
What is Threshold frequency?
Answer:
The minimum value of specific frequency energy after that the photoelectric effect can be occur.

Question 20.
Number of unpaired electrons in Ni+2 ion is.
Answer:
2.

Question 3.
How was neutron discovered? Write its main properties?
Answer:
Chadwick in 1932 bombarded a thin sheet of beryllium element with α – particles and observed highly penetrating rays of neutral particles. He called these neutral particles as neutrons. The mass of a neutron is approximately same as the mass of a proton but there is no charge on neutron.

Question 5.
How was anode rays discovered? Write its main properties?
Answer:
In 1836, E. Goldstein observed a new type of luminous rays passing through the holes or perforation of the cathode and moving in a direction opposite to the cathode rays. Thus these rays consisted of positively charged particle moving away from the anode and were named as positive rays or anode rays.
Characteristics of anode rays:

Question 6.
To determine exact position and velocity simultaneous of fast moving electron is not possible. Why? Explain?
Answer:
Electron is a micro particle which can be seen by X – rays or y rays at low wave – length. To see it is essential that photon of light colloids with electron and returns for vision. But due to collision, momentum (Velocity) of electron changes. Therefore to locate the exact position of electron its momentum (Velocity) changes.

Question 8.
What is Zeeman effect?
Answer:
Zeeman in 1896, observed that when a magnetic field is applied on a source producing spectral line, the spectral lines get split into several fine lines. This phenomenon is called Zeeman effect.

Question 9.
What is a particles?
Answer:
Each a particle carry two unit of positive charge (+2) and four unit mass. Hence it is called Helium nucleus and represented as 2He4.

Question 10.
Write the characteristics of protons?
Answer:
Characteristics of protons:
1. Proton is the fundamental particle of proton by passing an electric discharge through a gas in a discharge tube H+ ions obtained are called protons or bombarding electron on H atom electrons is released and H+ is obtained.
H + e → H+ + 2e–
By taking different gases in the discharge tube positive particles of different masses are obtained. Positive particle (proton) obtained from hydrogen is the least. Thus, proton is the fundamental particle of an atom.

Question 12.
Why is emission spectrum called line spectrum?
Answer:
On passing current in a discharge tube containing hydrogen gas at high voltage, radiations are emitted. When these radiations pass through prism, split into different sharp lines. On viewing by spectroscope, it is clear that here are many series of coloured lines. Each line has definite wavelength. Due to presence of lines of different wavelength in emmission spectrum, it is called line spectrum.

Question 15.
Which of the following are isoeiectronic species Le. those having the same number of electron:
Na+,K+,Mg+2,Ca+2,S-2,Ar.
Answer:

Question 17.
What is quantum?
Answer:
According to quantum theory of radiation, emmission or absorption of energy is not continuous but energy is transformed in the form of small energy packet or quanta which are always in integer number e.g. 1, 2, 3 …. Unit of energy is called quantum.

Question 1.
What is Pauli’s exclusion principle?
Answer:
Pauli’s exclusion principle: “No two electrons in an atom can have the same value of all four quantum number”. It means even if two electron have the same values for n, 7 and m they must have different values of s.
Example: The value of four quantum number for 2 electrons present in 3s orbital. 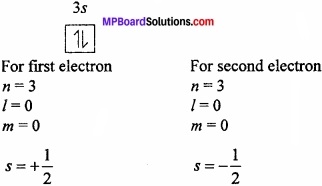 Question 9.
Write Aufbau principle?
Answer:
Aufbau is a German word which means building up. According to this principle electron one filled in different energy subshells according to the increasing order of their energies. Thus subshell of minimum energy are filled first. 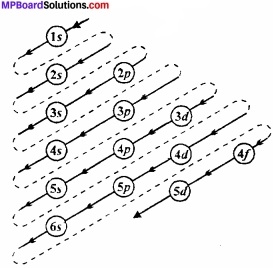 Question 12.
What is Planck’s quantum theory?
Answer:
1. Energy is neither emitted nor absorbed continuously in the form of small energy packet or quanta which are always in integer number (1, 2, 3 …).

2. Unit of energy absorbed or emitted is quantum.

3. The amount of energy associated with a quantum of radiation is proportional to the frequency of light.
E ∝ v
E = hυ
Where h is constant called Planck’s constant.

Question 15.
Write the observation and conclusion of Rutherford’s scattering experiment?
Answer:
Observation and Conclusions of Rutherfords experiment:
1. Most of the α – particles passed through the gold foil undeflected which concludes that there is a lot of empty space in an atom.

2. Few α – particles were deflected through small angles. Thus the central part of an atom consist of positive charge which is called nucleus.

3. Out of the 20,000 particles bombarding only one particle gets deflected and returns back. Thus the volume of nucleus is a minute part of the atom. Rutherford determined that the radius of the atom is 10-8 cm (1Å) and radius of nucleus is 10-13cm.

Question 16.
Write the defects of Rutherford Model?
Answer:
Defects of Rutherford’s Model: In 1913 Neel Bohr pointed out the following defects in Rutherfords model:
1. According to the electromagnetic theory of Maxwell, a charged particle when accelerated emits energy in the form of electromagnetic radiations. Since electrons are charged particles, therefore, electrons revolving in an orbit should continuously emit radiations.

As a result of this, it would slow down and would no longer withstand the attractive forces of the nucleus. Hence, it would move closer and closer to the nucleus and would finally fall in the nucleus following a spiral path. This means that atom should collapse. But we all know that atom is quite stable in nature. Thus, Rutherford’s model failed to explain stability of atoms.

2. Rutherford’s model also failed to explain the existence of definite lines in the hydrogen spectrum. If the electrons were to lose energy continuously, the atomic spectrum of hydrogen should have been continuous. But it was found to be discontinuous in the form of lines of definite wavelength.

3. This model does not determine the number of electrons in each orbit. Thus, the Rutherford’s model could not explain the stability of an atom and line spectra of atoms.

Question 17.
What are the main defects of Bohr’s model?
Answer:

Question 18.
Explain Hund’s rule with an example?
Answer:
Hund’s rule:
This rule deals with degenerate orbitals (orbitals having similar energy). It states as, “Pairing of electron in the orbitals of a particular subshell (p, d, f) does not take place until all the orbitals of the subshell are singly occupied.” 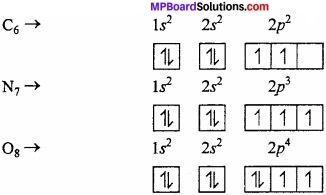 Question 20.
What is the maximum number of emission lines when the excited electron of a atom in n = 6 drops to the ground state?
Solution:
The posible transitions are:

It lies the visible region of light.

Question 22.
Atomic spectrum is called linear spectrum. Why?
Answer:
This type of spectrum is given by the atoms of all elements. It contains continuous thin coloured, sparkled lines, separated by black lines. Every element gives spectral type of line spectrum and these spectrums are their specific identity.
For example: In the spectrum of sodium, their obtained two clear yellow lines on 5890 A and 5896 A. If in a discharge tube, a hydrogen gas is filled at low pressure and electricity is passed, then a red coloured light can be seen. In this way the analysis of this emitted light can be done by spectroscope and a discontinuous spectrum is obtained in which four main lines are obtained which are called Hα, Hβ, Hγ and Hg. The spectrum in which only lines are obtained is called linear spectrum.

Question 23.
What do you mean by dual nature of a tiny particle like electron?
Or, A moving electron shows particle as well as wave nature. Give reason?
Answer:
Electron is a tiny particle, and it have a specific momentum due to particle nature and behave like a wave due to mobility, due to their refraction pattern appears and electron shows both the effects simultaneously. Other particles proton, neutron as well as atoms show dual nature when move with high velocity. The wavelength of wave produced by a moving particle is shown by de – Broglie equation. According to this the wavelength is inversely proportional to momentum.
λ = \(\frac { h }{ mv } \)
or λ = \(\frac { h }{ p } \) or λ ∝\(\frac { 1 }{ p } \)
Where, λ = wavelength of tiny particle like electron, m = mass of particle, v = velocity of particle, p = momentum of particle, h = Planck’s constant.

Question 24.
Quantum number of electron is given below. Arrange them in the increasing order of energy. Is the energy of any of them is same?

Question 2.
Write the observation and conclusion of Rutherford’s scattering experiment?
Answer:
Observation and Conclusions of Rutherfords experiment:
1. Most of the α – particles passed through the gold foil undeflected which concludes that there is a lot of empty space in an atom.

2. Few α – particles were deflected through small angles. Thus the central part of an atom consist of positive charge which is called nucleus.

3. Out of the 20,000 particles bombarding only one particle gets deflected and returns back. Thus the volume of nucleus is a minute part of the atom. Rutherford determined that the radius of the atom is 10-8 cm (1Å) and radius of nucleus is 10-13cm.

Question 3.
The emission transition of Paschen series starts from n shell and ends at n = 3 shell. So, determine the value of it and give the area of spectrum?
Solution:
Frequency,

3. An electron undergoes a process of emission or absorption of energy when it goes from one energy level to other i.e., E2 – E1 = hυ

3. Magnetic quantum number (m):
This explains effect of spectrum of atom when kept in magnetic field known as Zeeman effect. For each value of azimuthal quantum number l, m has values -l to 0 to +l, i.e., total (2l + 1) values. Thus,

Question 5.
Calculate the Bohr radius?
Answer:
When the single electron of hydrogen revolves around the nucleus, then two forces act on it.

Where, Z = atomic number, m = mass of electron, v = velocity of electron, e = charge, r = atomic radius.
The centripetal and centrifugal forces of a moving electron works in opposite direction and if their value is same than they balance each other and the electron rotate at its position. 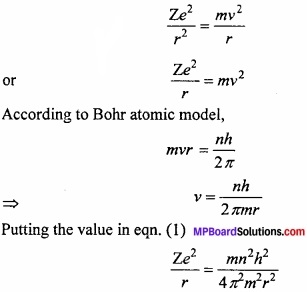 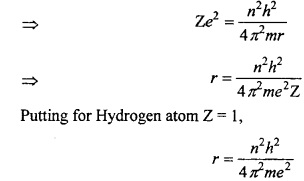 This equation is known as Bohr’s radius.

Question 6.
What is Balmer formula? How it explains the line spectrum of hydrogen?
Answer:
According to J.J. Balmer, the frequency of spectrum in visible range of hydrogen atom can be shown by following formula:
\(\bar { \upsilon } \) = RH = \(\frac { 1 }{ 2^{ 2 } } -\frac { 1 }{ n^{ 2 } } \)
Where, RH = Rydberg’s constant and n = 3, 4, 5, 6, ……..
These line series falls in visible range and known as Balmer series. After this four more series were discovered. Lyman series in ultraviolet region, Paschen series, Brackett series and Pfund series in IR region. To explain these series Balmer formula is converted into following formula: 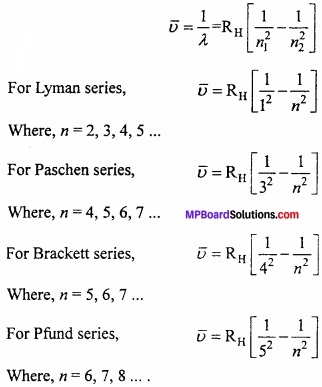