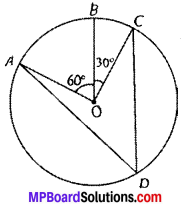 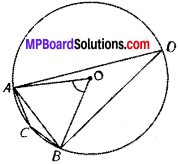 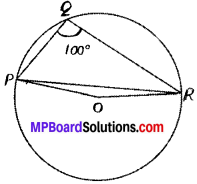 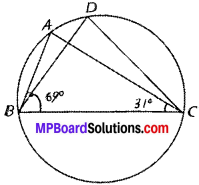 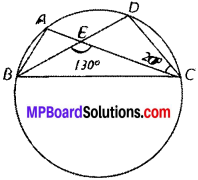 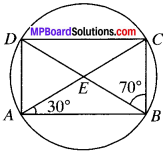 Question 8.
If the non-parallel sides of h trapezium are equal, prove that it is cyclic.
Solution:
Given:
AD = BC, AB ∥ DC.
To prove:
ABCD is cyclic quadrilateral.
Construction:
Draw AE and BF As on DC. 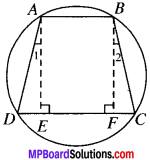 Question 9.
Two circles intersect at two points B and C. Through B, two line segments ABD and PBQ are J drawn to intersect the circles at A, D and Q respectively (see Fig.). Prove that ∠ACP = ∠QCD.

Question 10.
If circles are drawn taking two sides of a triangle as diameters, prove that the point of intersection of these circles lie on the third side.
Solution:
Given
C (O, r) and C (O1, r1) are two Circles in whichAB andAC are diameter. These circles intersect at point A and D.
To prove:
BDC is a line.
Construction: JoinAD.
Proof:
∠ADB = 90° (∠s in a semicircle)
∠ADC) = 90° (∠s in a semicircle) 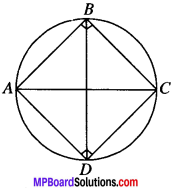 ABCD is a cyclic quadrilateral.
∠CAD and ∠CBD are angles on the same segment of a circle.
∴ ∠CAD = ∠CBD. 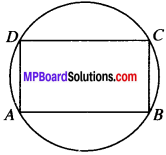