Question 5.
What are Enantiomers?
Answer:
The stereoisomers related to each other as non – superimposable mirror images are called Enantiomers.

2. When iodoform is heated with AgNO3 solution a yellow ppt. (Agl) is obtained but chloroform doesn’t give this reaction because in chloroform C – CI bond is more stable than C – I bondin iodoform.

3. On boiling Ethyl bromide with alcoholic KOH ethylene is formed. 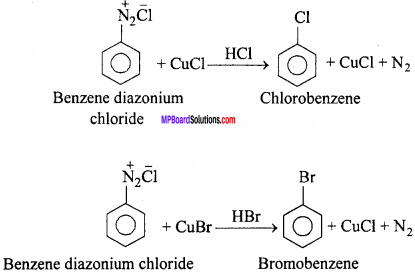 Application : It is an important pesticide.

Question 4.
What are Gem – dihalide and Vicinal – dihalide?
Answer:
When both halogen atoms are linked to one carbon atom of hydrocarbon then it is known as Gem-dihalide. Gem means geminal i. e., same position.

When both halogen atoms are connected to two different neighbouring carbon atoms, then it is known as vicinal dihalide. Vic means vicinal which means adjacent position.

Question 6.
Explain, Carbylamine reaction and give one application of this reaction. (MP 2018)
Answer:
Carbylamine reaction: On heating chloroform with primary amine (e.ganiline) and alcoholic KOH solution, phenylisocyanide or carbylamine is formed which has a very bad smell and is poisonous.

Application : Chloroform and primary amine can be tested by this reaction.

Question 7.
What is 666 (lindane)? Explain its preparation and use in agriculture.
Answer:
It is 1, 2, 3, 4, 5, 6 – HexachIorocyciohexane. It is obtained by heating benzene with chlorine in presence of sunlight.

Preparation : It is prepared by the chlnncriUiv benzene in the presence of ultraviolet light.

Uses:
Benzene hexachloride is an addition compound and its γ – isomer is called gammexane. It is an important pesticide used in agriculture. It is also called lindane or 666.

2. Fittig reaction : When Chlorobenzene is heated at 200°C with Cu powder in a sealed tube Diphenyl is formed.

When two molecules of aryl halide reacts with sodium metal in presence of dry ether, then diphenyl is formed. This reaction is known as Fittig reaction.

Answer:
1. Hunsdiecker method : When silver salt of a carboxylic acid is heated with bromine, in the presence of an inert solvent like CCl4, aryl bromide is formed.

This method is called Hunsdiecker method.

2. Raschig process : When benzene vapours mixed with air and HCl gas is passed over CuCl2 (catalyst) at 230°C, chlorobenzene is formed.

Question 10.
Write method of preparation, properties and uses of Freon.
Answer:
Freon : Dichloro, Difluoro methane.
it is formed by the action of SbF3 with CCl3 in presence of SbCl5.

It has very low boiling point due to which by increasing the pressure at room temperature it can be liquefied. It is a non – poisonous, non – combustible and inactive substance which is used as a cooling agent in the refrigerator. It is used in aerosol and foam.

Acetylation:
Acetyl chloride reacts with benzene in presence of anhydrous aluminium chloride to give acetophenone.

Question 13.
Give the uses of freon – 12, D.D.T., Carbon tetrachloride and Iodoform. (NCERT)
Answer:
It is an important pesticide.
Freon – 12:
Since freons have been found to be one of the factors responsible for the depletion of ozone layer, they are being replaced by other harmless compounds in many countries.

D.D.T:
DDT is highly toxic and has strong insecticidal properties and thus it was widely used as an insecticide and pesticide.

Carbon Tetrachloride:
It is produced in large quantities for use in the manufacture of refrigerants and propellants for aerosol cans. It is used as feed stock in the synthesis of chlorofluorocarbons and other chemicals, pharmaceutical manufacturing and general solvents use. Until the mid 1960’s, it was widely used as a cleaning fluid both in industry as a degreasing agent and in the home, as a spot remover and as fire extinguisher.

Iodoform:
It was earlier used as an antiseptic but the antiseptic properties are due to the liberation of free iodine and not due to iodoform itself. Due to its objectionable smell, it has been replaced by other formulations containing iodine.

Question 14.
Name of the following halides according to IUPAC system and classify them as alkyl, allyl, benzyl (primary, secondary, tertiary), vinyl or aryl halides : (NCERT)

Question 16.
Write the equation of following reactions of chlorobenzene : (MP 2015)

Answer:
1. Halogenation : Haloarene reacts with halogen in presence of halogen carrier like FeCl3 to form ortho and para substituted dihaloarene.

Question 1.
Explain the nucleophilic substitution reaction in alkyl halide by SN1 and SN2 medianism.
Answer:
Nucleophilic substitution reaction:
In the carbon halogen bond ofhaloalkane. halogen atom is more electronepativ0 as compared to the carbon atom hence, the shared pair of electrons between carbon and halogen is more attracted by the halogen atom. As a result a small negative charge and an equivalent positive charge develops on halogen atom and carbon atom respectively.

Nucleophile attacks the electron deficient carbon due to the presence of partial positive charge on it and replaces the weaker nucleophilic ion i.e. the halide ion. Thus, the reaction is known as nucleophilic substitution reaction.

(1) SN1 Mechanism (Unimolecular nucleophilic substitution) : In this mechanism following steps are involved :
(a) Formation of carbocation by dissociation of substrate i.e., reactant molecule.

(b) Attack of nucleophile on carbocation forming the product.

(2) SN2 mechanism (Bimolecular nucleophilic substitution):
Reactions of this type occur in one step i.e. they are concerted reactions. These reaction nucleophilic attack results in a transition state in which both the reactant molecules are partially bonded to each other and then the halide ion escapes out forming the product.
ROH– + CH3X → CH3OH + RX 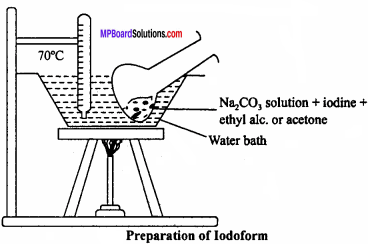 Question 3.
Write the structure of the major organic product in each of the following reactions: (NCERT) 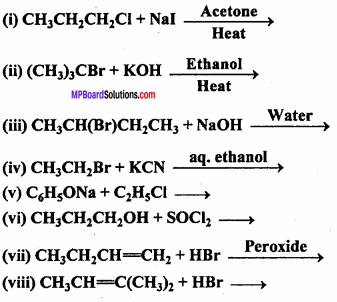 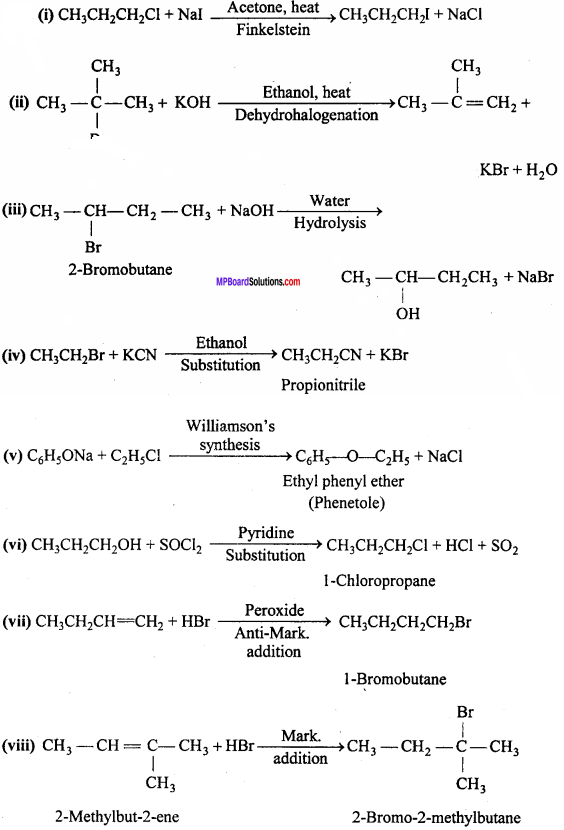 Method:
About 100 gm of bleaching powder made into a paste by adding about 200 ml of water and taken in a flask fitted with a condenser. Now, 25 ml of alcohol or acetone is added and the mixture is distilled, chloroform collects as a heavy liquid under water.

It is washed with dilute NaOH solution then with water, dried over fused calcium chloride and redistilled. The available chlorine of bleaching powder acts as oxidising as well as chlorinating agent during the preparation of chloroform from alcohol and acetone.
CaOCl2 + H2O → Ca(OH)2 + Cl2 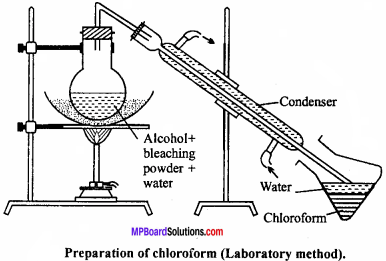 The chemistry involved in the conversion of alcohol and acetone into chloroform is as shown below:

(A) From alcohol: The steps involved are :
(i) Ethyl alcohol is oxidized by chlorine to acetaldehyde.

(iii) Two moles of chloral react with one mole of calcium hydroxide to produce chloroform.

(ii) Due to the presence of resonance in aryl halides there is some double bond character in C – Cl bond. Thus, the bond length of C – Cl bond is lesser than C – Cl bond in haloalkanes. Therefore, it is difficult to replace the halogen of haloarenes.

Question 6.
What product is formed by the reduction of chloroform? Give the chemical equation when it reacts to nitric acid and acetone.
Answer:
Reduction:
1. On heating with Zn and HCl, it reduces to form methylene dichloride.

2. On heating with zinc dust and water, methane is formed.

Reactions of Chloroform :
1. With Conc.HNO3:
On treating chloroform with concentrated nitric acid, the hydrogen atom of chloroform is replaced by nitro group and nitro chloroform (or chloropicrin) is formed. It is a liquid (b.p. 112°C) which is used in war as a poisonous gas.

2. With Acetone:
Chloroform condenses with acetone in presence of sodium hydroxide to form chloretone which is a hypnotic (sleep inducing drug) of high grade.

Question 7.
Give the Chemical reaction when chloroform reacts with following:

Or
How will you obtain the following from chloroform:

How trichloro methane reacts with :

Answer:
(a) Action of air and light (Oxidation):
Chloroform oxidizes in presence of sunlight and air and forms a poisonous gas, phosgene (carbonyl chloride).

(ii) One percent ethyl alcohol is added in the bottle. If phosgene gas is formed, alcohol reacts with it to form diethyl carbonate, a non – toxic substance, i.e. (C2H5)2CO3

(b) Carbylamine reaction:
On heating chloroform with primary amine (example aniline) and alcoholic KOH solution, phenylisocyanide or carbylamine is formed which has a very bad smell and is poisonous.

(f) Acetone :
Chloroform condenses with acetone in presence of NaOH to form chloretone which is a hypnotic of high grade. 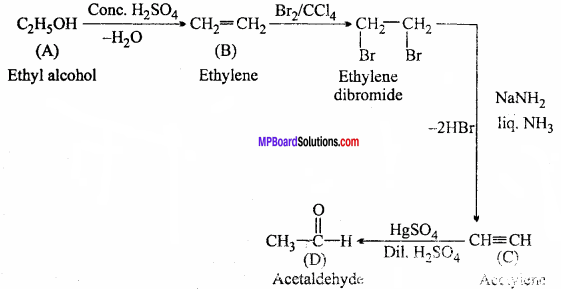