Question 1.
Did Dobereiner’s triads also exist in the columns of Newlands’ Octaves? Compare and find out.
Answer:
In Newland’s Octaves, the properties of lithium and sodium were found to be the same. This arrangement is also found in Dobereiner triads.

Question 2.
What were the limitations of Dobereiner’s classification?
Answer:
Dobereiner could identify only three ‘triads’ from the elements known at that time. Hence this system of classification into triads was not found to be useful.

Question 3.
What were the limitations of Newlands’ Law of Octaves?
Answer:

The Limitations of Newlands’ Law of Oclaves is as follows:

Question 1.
Use Mendeleev’s Periodic Table to predict the formulae for the oxides of the following elements: K, C, Al, Si, Ba.
Answer:

Question 2.
Besides gallium, which other elements have since been discovered that were left by Mendeleev in his Periodic Table? (any two)
Answer:
Scandium and germanium.

Question 3.
What were the criteria used by Mendeleev in creating his Periodic Table?
Answer:
Mendeleev used the relationship between the atomic masses of the elements and their physical and chemical properties. Among chemical properties, he examined the compound formed by elements with oxygen and hydrogen. He found that if the 63 elements known at that time were arranged in the increasing order of their atomic masses, the properties of elements and also formulae of their oxides and hydrides gradually changed from element to element and at a certain interval they suddenly started almost repealing relationship was expressed by Mendeleev’s periodic law. i,e the properties of examinants are the periodic functions of their atomic masses.

Question 4.
Lithium, sodium, potassium are all metals that react with water to liberate hydrogen gas. Is there any similarity in the atoms of these elements?
Answer:

Lithium, sodium and potassium – These three elements have one electron in their outermost orbit.

b) Helium is an unreactive gas and neon is a gas of extremely low reactivity. What, if anything, do their atoms have in common?
Answer:
Both helium (He) and neon (Ne) have filled outermost shells. Helium has a duplet in its K shells, while neon has an octet in its L shells.

Question 6.
By considering their position in the Periodic Table, which one of the following elements would you expect to have maximum metallic characteristic?
Ga Ge As Se Be
Answer:
Since, ‘Be’ lies to the extreme left-hand side of the periodic table, ‘Be’ is the most metallic among the given elements.

Question 2.
Element X forms a chloride with the formula XCl2, which is solid with a high melting point. X would most likely be in the same group of the Periodic table as:
(a) Na
(b) Mg
(c) Al
(d) Si
Answer:
(b) Mg

Question 6.
The position of three elements A, B and C in the Periodic table is shown below:

(a) State whether A is a metal or non-metal.
(b) State whether C is more reactive or less reactive than A.
(c) Will C be larger or smaller in size than B?
(d) Which type of ion, cation or anion, will be formed by element A?
Answer:
(a) A is a non-metal.
(b) C is less reactive than A because reactivity decreases down the group in halogens.
(c) C should be smaller in size than B as moving across a period, the nuclear charge increases and therefore, electrons come closer to the nucleus.
(d) A will form an anion as it will accept an electron to complete its octet.

Question 7.
Nitrogen (atomic number 7) and phosphorus (atomic number 15) belong to group 15 of the Periodic Table. Write the electronic configuration of these two elements. Which of these will be more electronegative? Why?
Answer:
Nitrogen (7) : 2, 5
Phosphorus (15) : 2, 8, 5
Nitrogen is more electronegative because Metallic character decreases across a period and increased down a group.

Question 8.
How does the electronic configuration of an atom relate to its position in the Modern Periodic table?
Answer:
In the modern periodic table, atoms with similar electronic configurations are placed in the same column. In a group, the number of valence electrons remains the same. Elements across a period show an increase in the number of valence electrons.

Question 10.
Compare and contrast the arrangement of elements in Mendeleev’s Periodic table and the Modern Periodic table.
Answer:

Question 2.
Element A forms a chloride with the formula ACl3, which is a stable compound. A would most likely be the same group of the Periodic Table as –
(a) Na
(b) Mg
(c) Al
(d) Si
Answer:
(c) Al

Question 7.
While moving left to right across a period, the atomic radii –
(a) Remains the same
(b) Approaches zero
(c) Decreases
(d) Increases first then decreases
Answer:
(c) Decreases

Question 11.
Which of the following elements is a non-metal?
(a) Aluminium
(b) Chlorine
(c) Sodium
(d) Silicon
Answer:
(b) Chlorine

Question 12.
As we move down in a group in Modern Periodic Table, the size of elements generally
(a) increases
(b) decreases
(c) remain the same
(d) first, increase then decrease
Answer:
(a) increases

Question 13.
As we move from top to bottom in a group in Modern Periodic Table, the electronegativity of elements
(a) Increases
(b) Decreases
(c) No change
(d) Not certain
Answer:
(b) Decreases

Question 24.
Which of the following elements where not among metals/elements named to fill the gap of Mendeleev’s Periodic Tablespaces?
(a) Cobalt
(b) Scandium
(c) Gallium
(d) Germanium
Answer:
(a) Cobalt 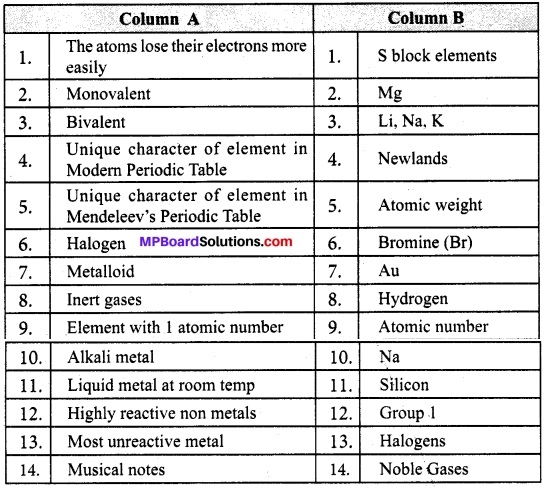 Question 1.
What would be the maximum number of electrons present in the outermost shell of atoms in the first period of Periodic Table?
Answer:
Two

Question 6.
Roasting is used for the extraction of which ore?
Answer:
Sulphide ore.

Question 8.
Which gas is evolved when a metal reacts with nitric acid?
Answer:
Hydrogen gas.

Question 9.
Name any two metal that does not react with water at all.
Answer:
Lead, copper, gold, silver. (any two)

Question 11.
Which material is used to coat electric wires in homes?
Answer:
PVC or Polyvinylchloride.

Question 12.
Name any two metals that are poor conductors of heat.
Answer:
Lead and mercury.

Question 3.
The present classification of elements is based on which fundamental property of elements?
Answer:
Atomic number.

Question 5.
Define Dobereiner’s law of triads.
Answer:
It states, “When elements are placed in order of the ascending order of atomic masses, groups of three elements having similar properties are obtained. The atomic mass of the middle element of the triad is equal to the mean of the atomic masses of the other two elements of the triad.”

Question 6.
Why did Dobereiner’s system of classification fail?
Answer:
The major drawback of Döbereiner’s classification was that it was valid only for a few groups of elements known during that time. He was able to identify three triads only. Also, more accurate measurements of atomic masses showed that the mid element of the triad did not really have the mean value of the sum of the other two elements of the triad. For elements of very low mass or very high mass, the law did not hold good. For example, Fluorine (F), Chlorine (Cl), Bromine (Br). The atomic mass of Cl is not an arithmetic mean of atomic masses of F and Br.

Question 10.
X and Y are the two elements having similar properties which obey Newlands law of octaves. How many elements are there in between X and Y?
Answer:
The law states there are eight elements in an octave (row). A number of elements between X and Y are six.

Question 11.
What are the drawbacks of Newlands law of octaves?
Answer:
Following are the major drawbacks:

Question 2.
What periodic trends do we observe in terms of atomic radii or atomic sizes in Modern Periodic table?
Answer:
Following two trends are observed:
1. Within each column (group), atomic radius tends to increase from top to bottom. This trend results primarily from the increase in the number of the outer electrons. As we go down a column, the outer electrons have a greater probability of being farther from the nucleus, causing the atom to increase in size.

Question 3.
An element A with atomic number 19 combines separately with NO3–and (SO4)2–,(PO4)3–radicals:
(a) Give the electronic configuration of element A.
(b) Write the formulae of the three compounds so formed.
(c) To which group of the periodic table does the element ‘R’ belong?
(d) Does it form covalent or ionic compound? Why?
Answer:
(a) Electronic configuration of A: 2,8, 8, 1.
(b) Compounds formed are A(NO3), A2(SO4) and K3(PO4).
(c) A has one valence electron and hence, it belongs to the first group.
(d) It forms the ionic compound.

Question 4.
Describe types of periods, blocks and trends of periodic properties along periods associated with Modern Periodic Table.
Answer:
Periods:
First period (Atomic number 1 and 2): This is the shortest period. It contains only two elements (hydrogen and helium).

7th period (Atomic number 87 to 118): As like the sixth period, this period also can accommodate 32 elements. Till now 26 elements have been authenticated by IUPAC.

Blocks in Periodic Table:
The periodic table includes “blocks” defined in terms of which type of orbital is being filled via the Aufbau principle. This gives us the s-block, p-block, d-block, and f-block.

Blocks:
The s-, p-, d-, and f-blocks contain elements with outer electrons in the same type of orbital. Another key link between electron arrangement and position in the periodic table is that elements in any one main group have the same number of electrons in their highest energy level. The number of elements discovered so far is 118. The last element authenticated by IUPAC is Cn112 (Copernicium).

Observations:
Two isotopes of chlorine are Cl-35 and Cl-37. Both isotopes have the same chemical properties and hence, both isotopes should be placed in the same position.

Observations:
The position of Cobalt and Nickel were decided by placing them in the increasing order of atomic number in the Modern Periodic Table. Since isotopes are elements with the similar atomic number they are placed in the same position as its basic elements in the modern periodic table.

Observations:
Elements present in Group 1 are: 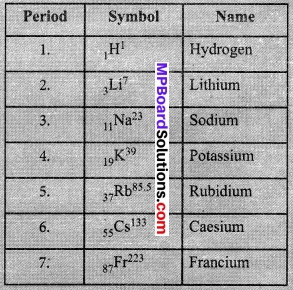 Electronic configuration of the first three elements of Group I are as below:

Observations:
No, these elements contain variable valence electrons as they belong to different groups:

Observations:
Elements of the third period are:

Observations:
Metallic property reduces while moving right in a period.