Questions 2.
Which state does receive the lowest rainfall due to southwest monsoon?
(a) Rajasthan
(b) Karnataka
(c) Tamilanadu
(d) Punjab
Answer:
(a) Rajasthan

Questions 4.
Maximum variation in the amount of rainfall is found in –
(a) Maharashtra
(b) Assam
(c) Andhra Pradesh
(d) Rajastan
Answer:
(d) Rajastan

Answer:
1. (d) Area of very high rainfall.
2. (c) The region which receives rainfall from retreating monsoon.
3. (b) Area of less then 50 cm. rainfall.
4. (a) Hot winds of the summer season in Northern India.

Question 1.
What do yon mean by climate?
Answer:
The average weather conditions, over a long period of time of a’ particular place are known as climate.

Question 3.
What is the meaning of “Monsoon”?
Answer:
Monsoon means the winds bowing on the earths surface’ which change their direction in Summer and Winter season

Question 1.
How do the relief features of India affect the climate?
Answer:
The relief features of India influence the temperatures as well as the rainfall. The Himalayas on the northern boundary of the country extending from east to west protect India from cold breeze coming from the North in winter season. They intercept the moisture bearing monsoon winds and help in precipitation.

Question 6.
How does climate affect the health?
Answer:
It has been seen that sultry hot weather is followed by widespread rains which give rise to many diseases. Water is stored in the pots and ponds, which becomes the birthplace of mosquitoes and spread diseases. Thus, climate affects our health too.

Question 7.
How do monsoon winds originate?
Answer:
Monsoon winds are related to weather because they blow from land to sea for six months and from sea to land for next six months. There are several concepts of the origin of monsoon but the thermal concept is important. According to this concept, monsoon winds are in fact land and sea breezes on a large scale.

By differential heating of the land and the sea winds blow from sea to land in the daytime and from land to ,sea in the night. Similarly in summer season winds blow’ from high pressure system on sea to low pressure system on lands. During winters, a complete reversal takes place with high pressure on the land and the low pressure over the sea. At this time winds start blowing from land to sea. This is called monsoon.

Question 1.
Explain the factors influencing the Indian Climate.
Answer:
The factors influencing Indian climate are:
1. Latitude:
India is situated in the northern hemisphere in the south of Asia continent. Tropic of cancer passes through the center of the country. Due to this specific location, its southern part has tropical climate and northern part has continental type of climate.

3. Relief features:
Relief features of the country influence the temperatures as well as the rainfall. The Himalayas on the northern boundary of the country extending from east to west protects India from cold breeze coming from the north in winter season. They intercept the moisture bearing monsoon winds and help in precipitation.

4. Distribution of water and land:
India is a part of Asia continent. During summers the north – western plains of India gets more heated and center of low pressure is established here. This low – pressure area attracts the winds coming from the Indian Ocean. During winters this area becomes more colder and center of high pressure develops here and wind starts blowing from land to sea. These winds influence the climate of India. Rainfall occurs due to the winds coming from the sea.

5. Jet streams blowing in the upper atmosphere:
A westerly jet stream blows above northern India in winter season but in rainy season it moves northwards above Tibetan plateau. Easterly jet stream develops at about 15°N latitude. Nature of these jet streams is responsible for summer monsoon. Shifting of jet streams towards north and south is the cause of uncertainty and irregularity of south-west monsoon in India.

6. Monsoon winds:
In India monsoon winds blow in summer from sea to landmass and in winter season from landmass to sea. This change in monsoon winds changes the weather and seasons in India.

1. Cold Weather Season:
December to February. The cold weather persists from December to February throughout India. January is the coldest month. Temperature varies from 10°C to 25°C. Temperature is between 10°C to 15°C in the northern plains and 25°C in the southern parts of the country. There is high pressure the northern plains due to the cold climatic conditions. The cold dry winds blow from the high pressure towards the low pressure equatorial regions.

These winds are north – westerly in the Ganga Plains and north- easterly over the Bay of Bengal. Culy two parts of the country receive rain in this season. First is the north – west part of India which receives rainfall from the Mediterranean cyclones. Second is tire Coast of Tamilnadu which gets rainfall in winter because of the north – east winds which blow over the Bay of Bengal. But in other parts of the country, the weather is pleasant with clear skies and bright sun – shine.

2. Hot Weather Season:
March to May. During this period there is a rapid shift of the belt of heat from south to north. In March, April and May the highest day temperatures occur in the Deccan Plateau (38°C), Gujarat (43°C) and North-West of India (48°C) respectively.

In May the rising temperature leads to low pressure in a wider area from the Thar Desert to Chhotanagpur. Because of this low pressure the moisture – laden winds from the Arabian Sea are attracted towards this area and consequently there is (about 158 ems) rainfall in the Rajmahal and Chhotanagpur Hills lying between the Satpuras and the Vindhyas.

3. Advancing Monsoon season:
This season runs from June to September. During these mouths Me south – west monsoon winds blow northwards in two branches from the Arabian Sea and the Bay of Bengal. They make rainfall almost in the whole of northern India.

As such Kutch receives less than 40 cm of rainfall. The Bay of Bengal branch causes heavy rainfall in the hills of Assam. Cherrapunji receives more than 1,000 cm of rainfall annually. As the monsoon winds take a turn from east to west because of the Himalayas, the rain goes on decreasing. As such when Kolkata gets, a rainfall of 119 cm Allahabad gets 76 cm due to the uncertainty and uneven distribution of rainfall,, floods and droughts are common during this season.

4. Retreating Monsoon Season:
This seasons is in October and November. In this season the monsoons start to retreat back. Passing over from Bay of Bengal they strike on the coast of Tamilnadu and give sufficient rainfall. This rainfall is not certain and equally distributed.

Question 3.
Show the distribution of rainfall in the Map of India and name the different areas.
Answer:
Areas of Very High Rainfall. Assam, the Ganga Delta, the Western Ghats and the Western Coastal Regions and the north mountainous regions (the Himalayas) receive heavy rainfall of 200 cm and above annually. 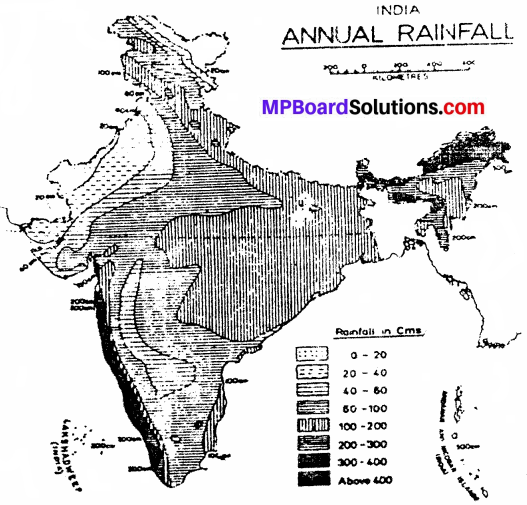 Area of Normal Rainfall:
The areas receiving rainfall between 50 cm and 100 cm come under this category. This category consists of Deccan Plateau, Western U.P., South Eastern Punjab, Eastern Rajasthan and parts of Kashmir.

Question 4.
Describe the effect of climate on human life.
Answer:
The climate of a country affects its socioeconomic life. The effect of diversities of climatic conditions can be seen in our country also. Monsoon is said to be the center of Indian Economic life.

Question 2.
Monsoon winds are related to –
(a) Weather
(b) Climate
(c) Season
(d) None of the above
Answer:
(a) Weather

Question 4.
The state which receives sufficient rainfall during retreating monsoon is –
(a) Kerala
(b) Tamilnadu
(c) Bihar
(d) Assam
Answer:
(b) Tamilnadu

Question 1.
What is weather?
Answer:
Weather is the study of the atmospheric conditions like temperature, pressure, wind, humidity and rainfall over a short period of time or at a specific time at a particular place.

Question 2.
What is climate?
Answer:
The average weather conditions over a long period of time of a particular place is known as climate.

Question 7.
What are ‘Mango Showers’?
Answer:
Towards the end of the summer season, pre – monsoon showers are a common phenomenon in Kerala and the coastal areas of Karnataka. These showers are locally known as ‘Mango Showers’, since they help in early ripening of mangoes.

Question 8.
What is Kalbaishaki?
Answer:
Kalbaishaki in the local nomenclature means Calamity of the month of Baisakh. The north westerly and northerly winds in Bengal and Assam cause very sharp showers. They are essentially evening thunderstorms.

Question 9.
What are ‘Blossom Showers’?
Answer:
Thunderstorms developed in hot weather season cause some rainfall in Kerala. These rains are known as ‘Blossom Showers’ in Kerala because they are beneficial to the coffee plantation of the state.

Question 10.
Which state in India receives bulk of its rainfall from retreating monsoon?
Answer:
Tamilnadu.

Question 12.
What is the average annual rainfall of India?
Answer:
It is 105 cm.

Question 14.
What are jet streams?
Answer:
Jet streams are fast flowing winds blowing in a narrow zone in the upper atmosphere.

Question 1.
What is meant by western disturbances?
Answer:
The shallow cyclonic depressions which originate over the Mediterranean and travel eastwards across Iran and Pakistan. These winds ultimately reaching the north – west part of India cause rainfall and other weather disturbances.

Question 3.
Name the four seasons of India.
Answer:
On the basis of the monsoon variations the year is divided into four seasons:

Question 4.
Write a note on retreating monsoons.
Answer:
The months of October and November are known for the retreating monsoons. During this season the pressure in north – west India becomes weaker and shifts southward. In the first week of September they withdraw from Rajasthan. In November it is above Karnataka and Tamilnadu. By mid – December it retires completely from the peninsular plateau. Tamilnadu receives sufficient rainfall during retreating monsoon. But the rest part of India remains dry.

Question 5.
Describe the cold weather season or winter season of India,
Answer:
The Cold Weather Season. Cold weather season lasts from December to February. Temperature varies from 10° to 15°C in Northern plains to 22°C in the southern part of the Peninsula. Due to cold, high pressure is created in the plains. So the winds blow out towards the equatorial low pressure.

These winds are dry and cold. Most parts of India experience fine weather with clear skies and bright sunshine. This season is dry season for India except North – west part of India which receives rainfall from the Mediterranean and the coast of Tamilnadu which gets rainfall from the Bay of Bengal.

Question 1.
Narrate the mechanism of the monsoons.
Answer:
The word ‘monsoon’ is derived from the Arabic word ‘mausim’ which means season. The formation of season is the chief characteristic feature of this climate. The world ‘monsoon denotes a season in which the wind regime is completely reversed. The direction of wind is reversed periodically. The reversal of direction of the monsoon winds is attributed to the difference in annual temperature on the land and on the sea.

Tire variation in temperature on the land and the sea creates high atmospherics pressure on the sea during summer and on the land during winter season which gives rise to the change in direction of the winds with a change in pressure of tire land. Thus, India which basically falls in the Trade winds zone experiences sudden reversal of winds from Indian Ocean to the land area.

This wind picks up moisture from the sea and enters the country through Arabian Sea and the Bay of Bengal. The Arabian Sea branch of the monsoons – is obstructed by the Western Ghats. The windward side of the Sahyadries receive very heavy rain. These winds then cross over the Western Ghats and cause rainfall in the Deccan Plateau, and Madhya Pradesh.

But a big chunk of these winds is deflected and enters into the Indian sub – continent. This branch also splits into two parts, one part moving towards Ganga Plains and other towards Brahmputra Valley. Thus by July the entire country comes under the influence of monsoons.