Question 1.
Write the latitudinal extent of Europe.
Answer:
Europe is located between 37° to 72° North latitude.

Question 1.
Describe the climate and vegetation of Europe.
Answer:
In the Western Europe the climate is marine type. In this climate die winters are cool not cold, and the summers are warm and not hot. Winters are foggy. The rainfall is well distributed all over the year and the temperature is equable. Such climate is found in Central and Eastern Europe. This part of the continent is far from die moderating influence of the westerlies and the ocean. It has Continental climate where it is extreme hot in summer, cold in winter.

The range of temperature is very great Rainfall is moderate. In southern European countries surrounding the Mediterranean the winters are warm and summers are dry. In the summer the region comes under the influence of sub-tropical high pressure belt It, combined with off-shore winds rales any possibility of rain.

In the winter the region comes under the influence of the rain bearing westerlies. In the region situated in the North of Arctic Circle the summers are brief, days are long and warm. The sun is visible at night also. For die major part of the year the region is covered with snow. Precipitation is much less and it is in the form of snow only. This type of climate is known as Tundra climate.

Question 2.
Describe the physical features of Europe.
Answer:
Europe has been divided into four physical divisions:

1. The North Western Highlands:
In the North western part of Europe there are mountains and plateaus. Their extent is more in the countries like Norway and Sweden. The coast line of Norway is indented, ragged, long and narrow and the deep arms of the sea between high cliffs penetrate into the land. Here the land is not fit for cultivation. Hence population is very thin.

2. The Great Europe Piains:
They are spread from France at the Atlantic coast to the European part of Russia at Ural Mountains. They are widest in Russia and go on narrowing towards the west It extends from the white sea in the north to the Southern plateaus and mountain in the south. There plains are very fertile. The important rivers are Volga, Danube, Seine, the Rhine, the Alvin, the Order etc.

3. The Central Plateau:
A series of mountains and plateaus are spread to the Southern part of the European plains. They are notoriety high. It is not fit for agriculture.

4. The Southern Alpine Mountains:
To die south of the old mountains live a chain of young and high mountain. These mountains extend from Atlantic Ocean in the west to the Caspian Sea in the east The most important among them is die Alps Mountain. Mount Blanca is the highest peak of the Alps.

Map Work:
Mark the following in the map of Europe: 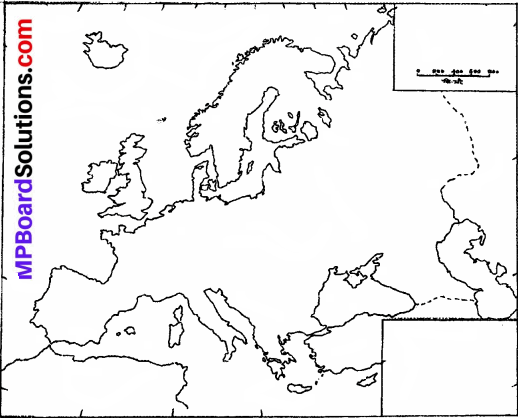