Question 1.
Coal is found in abundance in:
(a) Russia
(b) Malaysia
(c) Java
(d) Pakistan
Answer:
(a) Russia

Question 1.
Name the countries where iron is found.
Answer:
India, China and Russia.

Question 1.
What is the importance of agriculture as the important economic resources of Asia?
Answer:
The vast population of Asia depends upon agriculture. The main occupation of the people in the alluvial riverie plains, like the Indus – Ganga plains, Yang – Tse – Kiang and Hwnag Ho plains, Iirawady and Metkong plains is agriculture. The bulk of Asia’s population is found here.

Crops are grownnot only inplains but they also cultivable in the foothills of mountains and plateaus. The main crops grown in Asia are rice, wheat, maze, sugarcane, tea, silk, jute, rubber, tobacco, spices and fruits. The silk of China and rubber of Indonesia help in consolidating the economy of these countries.

Question 2.
How do the transport resources of Asia help in its economic development?
Answer:
In Asia China, Japan, India, Singapore, Pakistan, Bangladesh etc. are those countries where the roads have been developed on a large scale. It has helped in the development of trade and industry and the economy of these countries. The Trans – Siberian Railway is the world’s longest Railway. It extends from Moscow, the capital of Russia to Vladivostok. It has contributed a lot to its economic development In the same way India, China, Japan etc.

have developed railway network. It has helped in the economic development of these countries. The Suez Canal joins the Mediterranean Sea and the Red Sea. It has great importance in Asia’s trade. The countries of Southwest Asia and East Asia and the other industrialized countries of the world have come closer to each other through this route. It has also increased their trade. Almost all the big cities of Asia are connected by Airways. Hong Kong, Tehran, Singapore, Shanghai, Tokyo etc. are connected by air routes.

Depict the following in the map of Asia: 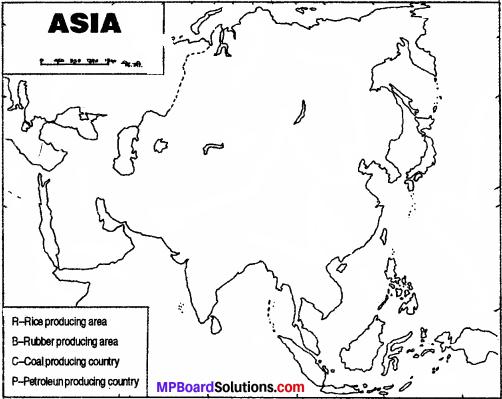