Question 2.
Out of the following which is not a flow:
(a) Capital
(b) Income
(c) Investment
(d) Depreciation.
Answer:
(a) Capital 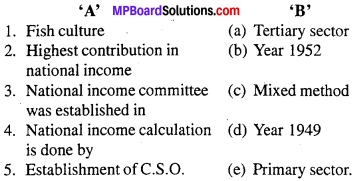 Question 5.
Answer the following in one word/sentence:

Question 2.
What is Macro-economics?
Answer:
Macro-economics is that part of economic theory which deals with the aggregate units of the economy, e.g.,all firms, all industries etc.

Question 4.
What are consumption goods?
Answer:
Objects that satisfy human needs directly and which are not used for production of other commodities are called consumption goods, e.g., milk, vegetables, wheat, rice etc.

Question 6.
What are final goods?
Answer:
Final goods are those goods which are out of production line and are ready for use by the user. These goods cannot be resold and are included in estimating national income. There goods cannot be used as raw materials for production of other goods.

Question 8.
Explain the concept of Flow and Stock.
Answer:
Stock is related to a point of time. That is, the stock is a quantity measured at a certain point of time which may have accumulated in the past. Flow is an amount to be measured in a specific period of time. Flow is a price fluctuation because they are measured per unit time period, e.g., Interest on capital, Sale of rice, etc.

Question 10.
What is Depreciation?
Answer:
Depreciation is the permanent and continuing decrease in the quality, quantity or value of assets. Depreciation may be defined as reduction of recorded cost of a fixed asset in a systematic manner, e.g., building, office equipment, machinery, etc. In order to calculate national income depreciation is deducted from gross national product.

Question 13.
What is National income?
Answer:
The national income means the total value of goods and services produced in a year in a country from all the economic activities, in terms of money. According to Prof. Marshall, “ National income is the labor and capital of a country acting on its natural resources, producing annually, a certain net aggregate of commodities, material and immaterial, including services of all kinds.” According to Prof. Pigou, “ National income is that part of the objective income of the community, including of course, income derived from abroad, which can be measured in money.”

Question 3.
What is the difference between Micro-Economics and Macro – Economics?
Answer: 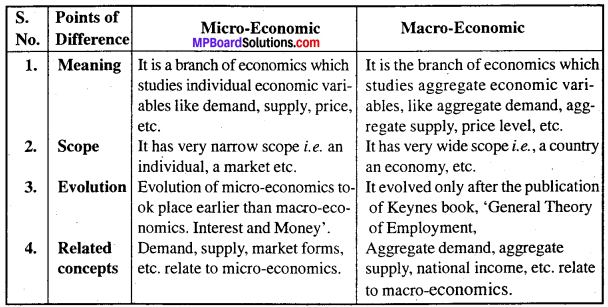 Question 6.
Describe the Great depression of 1929.
Answer:
The ‘Great Depression of 1929’ and the subsequent years saw the output and employment levels in the countries of Europe and North America fall by huge amount. Demand for goods in the market was low. Many factories were lying idle, workers were thrown out of jobs. In USA from 1929 to 1933 unemployment rate rose from 3 percent to 25 percent. Over the same period aggregate output in USA fell by about 33 percent.

Question 8.
Calculate national income from the given data:

Question 9.
Calculate National Income on the basis of the given data by income method: Heads Rs. (in crores)

Question 10.
On the basis of following data find out National Income by income method:

Question 12.
Specify the relation of gross domestic product with welfare.
Answer:
Gross domestic product refers to money value of goods and services produced within the territorial boundaries of the country in a given year. With the increase in income consumption expenditure of a person increase which in turn increases material welfare. Therefore, it is not appropriate to relate GNP with welfare or their generalization may not be correct due to. following reasons:

1. GDP shows the total goods and services produced in the country. However, it does not exhibit the structure of the product if increase in GDP is mainly due to increased production of war equipment and ammunition. Then such an increase cannot be associated with any improvement in economic welfare.

2. If increase in GDP is due to rise in prices and not due to increase in physical output, then it will not be a reliable index of economic welfare.

3. GDP does not consider the changes in population of a country. If rate of population growth is higher than the rate of growth of GDP, then it will decrease per capital availability of goods and services, which will adversely affect the economic welfare.

(iii) Incomes received are generally calculated from income-tax returns. Therefore, income method is of limited used in underdeveloped countries because a very small part of the income earners are tax payers in these countries.
Income method of estimating national income is useful because it provides information about distribution of national income among various factor categories like share of wages profits etc. in national income.

Question 17.
Will a profit maximizing firm in competitive market ever produce a positive level of output in the range where the marginal cost is falling? Give and explanation.
Answer:
A profit maximizing firm in a competitive market will produce a positive level at output in the same, where marginal cost is falling. Falling MC means that the cost of producing an additional unit of output trends to reduce. Here, price is constant as the firm is working in a competitive market in this case, the difference between firm’s total revenue and TVC (TVC = Σ MC) tends to increase. It means firm’s profit increases with the increase in the level of output. Then a competitive firm increase output when gross profit is rising. 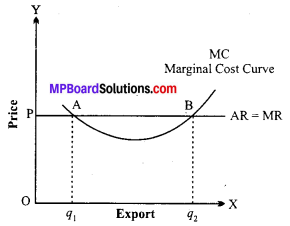 Question 19.
In a single day, Raju, the barber, collects ₹ 500 from hair cuts. Over this day, his equipment depreciates in value by ₹ 50, of the remaining ₹ 450, Raju pays sales tax worth ₹ 30, takes home ₹ 200 and retains ₹ 220 for improvement and buying of new equipment He further pays 120 as income tax from his income. Based on this information, complete Raju’s contribution to the following measures of income:

3. Formulation of policies:
National income is helpful in the formation of the policies of the country. For example, taxation policy, employment policy etc. National income statics is very useful in formulating the plans and fixing targets.

2. Development in the field of technical education:
An educated person can work more efficiently than uneducated one. So, education should be given to maximum number of people.

4. Check on population:
Population must be controlled. Special efforts should be made to check population in villages which will increase per capital income.

6. Export oriented trade policies:
Trade policies should be made in such a way that it will encourage export. Import should be discouraged so that national income will have a good effect. Five year plans and development programmers must be given stress. Export promotion should be given high priority.

2. Census of Income method:
By summing up the net incomes of all individuals and firms in a country during a year, we get the national income.

3. Expenditure method:
People don’t spend their entire income. They save a part of it as saving. By summing up all expenses and all incomes of all the people during a year, we get the national income.

5. Social accounting method:
This method was propounded by Prof. Richard Stone. In this method, the entire society was divided into various sections such as; producers, consumers, etc. The average income of some people of each section is calculated and then it is multiplied with the total number of people in each section.

Question 8.
A farmer sold cotton of Rs. 500 to cotton mill by producing himself. Cotton mill prepared garments and sold to garment factory at Rs. 600 garment factory sold it to a store on Rs.1000. Store owner sold it to consumer on Rs. 1200. Find out increased value by each.
Solution:
Following is the increased price by Farmer, Cotton mill, Ready made garments factory and store:

Question 10.
Explain in short G.D.P. at market price and G.D.P. at factor cost
Answer:
(A) Gross Domestic Product at market price:
It is also called the current price or prevailing price in the market. In order to calculate G.D.P. at current price final goods and services produced during the year are valued in terms of prevailing price of that year. To measure it we multiply the quantity of produced goods with their prices. It can be explained like this:

Increase in the value of Gross domestic product (G.D.P.) as compared to the value of previous year shows economic development and happy trend. It should be Carly studied whether the increase is due to increase in the quantity of goods and services produced or increase in price. If the increase has caused due to increase production, it should be taken as real increase. We can calculate per capital Gross Domestic Product (G.D.P) if we divide total G.D.P. with the population of the country.

It measures factor incomes generated with the domestic territory irrespective of whether generated by residents or non-residents. Being gross it marks no provision for the depreciation. As explained above market value of goods and services differs from the earnings of factors of production because of Net Indirect Taxes. Therefore, if we get gross domestic product at factor cost. Thus,
G.D.P. FC = G.D.P MP – Indirect taxes.