Question 4.
With a neat, labelled diagram, describe the parts of a typical angiosperm ovule.
Answer:
Structure of Ovule: Each ovule consists of the following parts as visible in a longitudinal section: 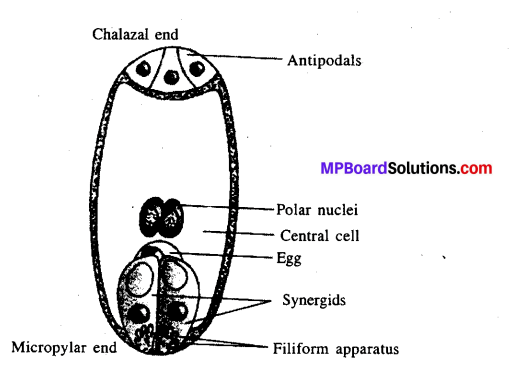 Six of the 8-nuclei are bound by cell wall and the remaining 2-celled polar nuclei lie below the egg apparatus in the large central cell.
Seven-celled stage
Three cells are grouped together at the micropylar end and constitute the egg appara¬tus, which is constituted of two synergids and one egg cell.
Three cells at the chalazal end are called antipodals. The large central cell has 2-polar nuclei.
Thus, a typical angiosperm embryo sac at maturity is 7-celled but 8-nucleated as the central cell has 2-nuclei

Question 10.
What is bagging technique? How is it useful in a plant breeding programme?
Answer:
It is the covering of female plant with butter paper or polythene to avoid their contamination from foreign pollens during breeding programme.

Question 11.
What is triple fusion? Where and how does it take place ? Name the nuclei involved in triple fusion?
Answer:
Triple fusion refers to the process of fusion of three haploid nuclei. It takes place in the embryo sac.
The 3-nuclei that fuse together are, nucleus of the male gamete and 2-polar nuclei of the central cell to produce a triploid primary endosperm nucleus.

(b) Differences between Coleoptile and Coleorhiza:

(c) Differences Between Integement and Testa:

Question 15.
What is meant by emasculation? When and why does a plant breeder employ this technique?
Answer:
Emasculation means removal of anthers, with a forceps, from the flower bud before dehiscence.
Plant breeder employs this technique to prevent contamination of stigma with the undesired pollen. This is useful in artificial hybridisation, where desired pollen is required.

Question 17.
Explain the role of tape turn in the formation of pollengrain wall.
Answer:
Tapetum is the innermost layer of the microsporangium. It produces the exine layer of the pollen grains, which is composed of the sporopollenin, the most resistant fatty, substance.
During microsporongenesis, the cells of tapetum produce various enzymes, hormones, amino acids and other nutritious material required for the development of pollen grains.

Question 18.
What is apomixis and what is its importance?
Answer:
Apomixis is the process of asexual production of seeds, without fertilisation.
The plants that grow from these seeds are identical to the mother plant.

Sexual Reproduction in Flowering Plants Other Important Questions and Answers

Question 7.
Development of ovary into fruit from ovule without fertilization, the process is called:
(a) Parthenio ovule
(b) Apomixis
(c) Pathenocarpy
(d) Parthenogenesis.
Answer:
(c) Pathenocarpy

Question 9.
Development of sporophyte without the fusion of a gamete is called:
(a) Apomixis
(b) Apospory
(c) Apogamy
(d) Pollination.
Answer:
(c) Apogamy

Question 13.
Cotyledons is situated in monocots:
(a) Axial
(b) Terminal
(c) Basal
(d) In Any Position
Answer:
(a) Axial

Question 15.
Endospermic nucleus are :
(a) Haploid
(b) Diploid
(c)Triploid
(d) None of these.
Answer:
(b) Diploid

Question 17.
The type of pollination in which genetically different pollen grains are brought to
stigma is : (AMU 2012)
(a) Xenogamy
(b) Geitonogamy
(c) Cleistogamy
(d) Dichogamy. ,
Answer:
(a) Xenogamy

4. Answer in One Word/Sentence:

Question 2.
What is the other name of female gametophyte?
Answer:
Embryo sac.

Question 5.
What is the substance found on the exine of pollen grains?
Answer:
Sparopollenin.

Question 6.
Give the characters of wind pollinated flowers.
Answer:
White in colour, small in size and pollengrains are formed in large number.

Question 7.
What is the ploidy of angiospermic endosperm?
Answer:
Triploid.

Question 8.
Give an example of a monocotyledonous endospermic seed.
Answer:
Ricinus.

Question 10.
What are monocious plants?
Answer:
Plants which has both male and female flower.

Question 1.
What is parthenogenesis ?
Answer:
Parthenogenesis : It is the method of reproduction in which ovum develops into embryo and forms a new plant without fertilization. It has been observed that pollination is necessary for parthenogenesis. It stimulates the process. Ulothrix, Spirogyra and Solan- aceae and Malvaceae family plants reproduce by this method.
Sometimes in some plants ovary also develops into fruit during this process. Such fruits are called as parthenocarpic fruits.
Example: Banana, Apple, Grapes, Guava etc. shows parthenocarpic fruits.

Question 2.
What is Polyembryony?
Answer:
Polyembryony : When more than one embryo develops in one seed then this condition is called as Polyembryony. It is generally found in citrus family. It is also found in Nicotiana, conifers, rice, wheat. It occurs when fertilization occurs in all embryo sacs found in the ovule.

Question 3.
Describe structure of anther with labelled diagram.
Answer:
Structure of Anther : Transverse section of anther shows that it consists of 2 lobes which are connected by connective. Each lobe contains two Pollen sacs. Innermost layer of pollen sac is called as Tapetum.

Tapetum is a layer rich in nutritive contents which supplies food material for the developing pollen grains. At first many Pollen mother cells are formed in them which divides meiotically to form haploid pollen grains.

(2) Cieistogamy : In Commelina benghalensis both cleistogamous and chasmogamous flowers are produced. The former are the underground flowers and the latter are the aerial ones developed on branches. In the small, inconspicuous cleistogamous flowers the pollen are shed within the closed flowers so that self-pollination is a must. This is also observed in Impatiens, Oxalis, Viola, Portulaca etc.

(3) Homogamy : Here the stamens and carpels mature at the same time. So, there is a greater chance of self-pollination as compared to cross-pollination, e.g., Mirabilis, Argemone etc.

Question 5.
What do you mean by micropropagation?
Answer:
Micropropagation : It is a modern method of reproduction. By this process thousands of new plants can be obtained from few tissues of mother plant. This method is based on tissue and cell culture technique.
In this process a small part of tissue is separated from the plant and then it is grown in nutrient medium in aseptic condition. The tissue develops to form a cluster of cells which is called as callus. This callus can be preserved for long time for multiplication. A small part of the callus is transferred to nutrient medium, where it grows into a new plant. This plant is then transferred to the field. By this process Orchids, Carnations, Chrysanthemum plants can be grown successfully. 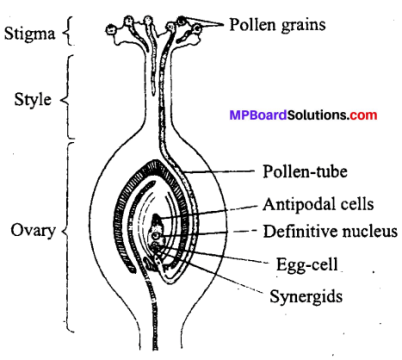 Question 3.
Describe development of embryo sac or Female gametophyte in angiosperms.
Answer:
Development of embryo sac or Female gametophyte in angiosperms :
During the initial stage of development of ovule primary archesporial cell gets demarcated at the apex of the nucellus below the epidermis. It divides periclinally into a outer primary parietal cell or primary wall cell and an inner primary sporogenous cell. The later acts as a megaspore mother cell which enlarges in size and divide meiotically to form a row of four megaspores. Of the four cells the upper three cells degenerate and appear as dark caps while the lowest one functions arid is called the functional megaspore. The latter greatly enlarges and forms the embryo sac. 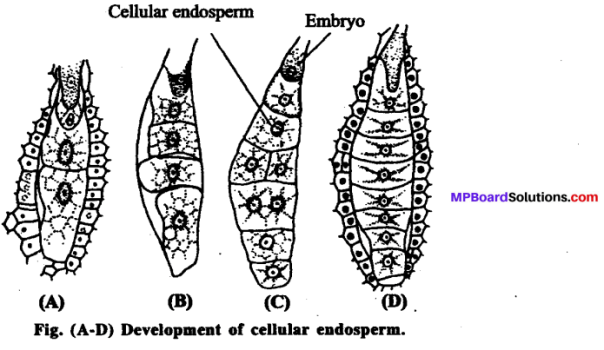 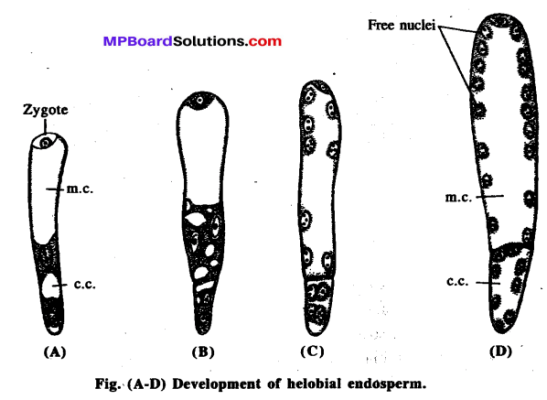 Each anther usually consists of two lobes, connected together by a connective. Each lobe contains two sacs called as Pollen sac. In the early stage of development the anther comprises of a homogenous mass of cells limited by a well demarcated epidermis. During the course of development the anther gets four lobed. Each lobe exhibits a hypodermal lining, few cells thick with distinct nuclei. These hypodermal cells constitute the archesporium. The cell of archesporium divide periclinally, cutting of parietal cells towards the periphery and sporogenous cells within it two chambers or loculi, which are termed as pollen sacs or microsporangia. 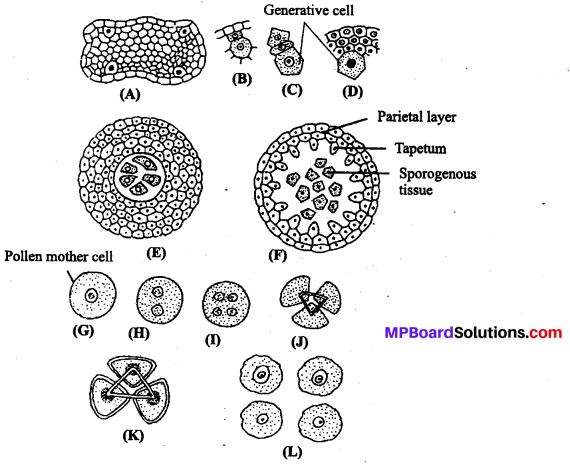 In many cases some of the sporogenous cells are nonfunctional and serve only as the nutritive material for the functional microspore mother cells. Each microspore mother cell is diploid in nature and by a single meiotic division give rise to four haploid nuclei. The four nuclei so formed are arranged tetrahedrally, and called as Tetrad. Innermost layer of pollen sac is called as Tapetum. Outer to which endothecium layer is formed. In outer most layer of pollen sac epidermis is formed. Surrounding each nuclei exine and intine are formed, now each structure is called as Pollen grain. Pollen grains are liberated during the dehiscence of anthers through stomium.

(ii) Difference between Seed and Ovule