Example 2.
Give a short description covering the details of the picture given below: [2009]

Once a fox fell into a well. He tried, again and again, to jump out, but he failed. The well was too deep. After a little while a goat passed by. She was thirsty. She looked into the well. She saw the fox in it. She asked the fox, “What are you doing there?” The cunning fox replied, “I am drinking water. It is very cool.” As the goat was thirsty, she jumped into the well. The fox jumped upon the goat’s back and jumped out of the well and ran away. He did not stay to help the goat out. It is rightly said, “Look before you leap.”

Example 3.
Give a short description covering the details from the picture given below. [2011] 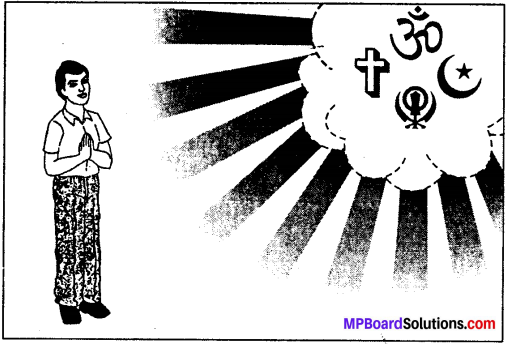 Answer:
There are many religions in the world namely-Hindu, Islam, Christian, Buddhism, Jews etc. All of them teach man to live a virtuous life. They ask him to be kind and loving, sympathic, peaceful and tolerant. But some of the leaders of these religions think that their religion is better than all the other religions. They ask people to hate and hurt other religion’s people and compel them ot adopt their religion. They spread violence and cruelty. Such person are a great threat to the peace in the world. In our country the various followers of many religions live happily with the people of other religions. They are tolerant and consider all human beings as their brothers. This is the real spirit of religion. We can make progress and prosperity only when there is peace and happiness.

Example 4.
Given below is a picture of a boat trip. Write a short composition based on the picture. [2009]

During the last summer vacation, I went to Mumbai. Two friends of mine were also with me. We visited several places there. Lastly, we decided to see the Elephanta Caves. They are on an island. It is about thirty kilometers from Mumbai.
It was a beautiful day. The weather was excellent. After a few minutes of sailing a lady got up. She announced herself our guide. She told us that the boat would reach the island in an hour. She pointed towards the harbour. Several ships were anchored there.

The most charming sight was that of the sea. It looked like a blue saucer. The sky was like a bowl put upside down. The waves hit our boat. White foam was produced. Sometimes water came over our faces. One foreigner had a guitar with him. We requested him to play on it. He played many lovely songs. Time flew fast. We reached our destination in almost no time.

Example 5.
Write a short description covering the details of the picture given below in 80-100 words.

The elephant went to the river. After bathing he filled his trunk with mud and water. When he passed by the tailor’s shop, he thrust his trunk into the tailor’s shop and poured the muddy water into the shop. All the new clothes were spoiled. It was tit for tat.

Example 6.
Give a short description covering the details of the picture given on next page in 80-100 words.
Answer:

when they were untied, they were broken easily. Remember, ‘united we stand, divided we fall’. Real strength lies in unity.

Example 7.
Give a short description covering the details of the picture given below: [2008]

Shepherd And His Sheep

A shepherd takes great care of his sheep. From morning to evening he wanders with his sheep. He loves every one of his sheep. When he hears the lamb’s innocent call his heart is full ofjoy. He also hears Ewe’s (i.e., female sheep) reply. All the sheep also love him very much. They feel safe because they know that their master is near them. A story in the Bible describes how a shepherd lost his one sheep and he searched it. His 99 sheep were safe, yet he found the lost sheep with much labour. He did not take rest until he found the lost one. ¡n the picture the shepherd is feeding his sheep.

Example 8.
Smoking harms the smoker as well as the non- smoker. It should be banned in public places. Look at the picture given on next page and write your views on the subject in an article for publication in your school magazine. Your article should not exceed 100 words.

Give a short description covering the details of the picture given below: 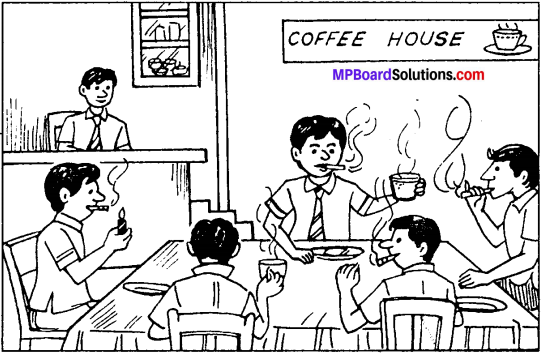 The dangers of smoking are very serious. We cannot dismiss them lightly. Practically all major disorders are caused by smoking as well as aggravated and made worse. High B.P., heart disorders and cancer are the major killer diseases caused by smoking. Few people realise that non- smokers can also suffer from the diseases induced by smoking if they go on inhaling the smoke from other people’s smoking. Our government has realised the harms of smoking and has put ban on smoking in public places.

1. The picture below shows the various forms of child labour. Write a paragraph using the picture in 80-100 words. 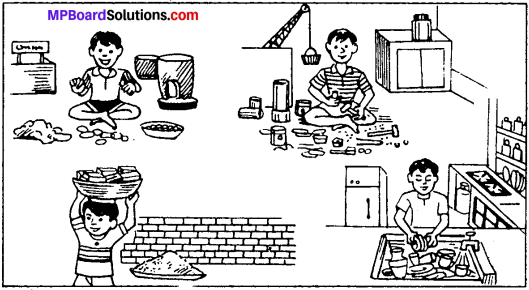 2. During the summer vacation, Rajesh visited his grandfather living in his native village Gauripur. It was a very pleasant yet unusual experience for him. Look at the pictures given below and write about this and other such experiences in 80-100 words. 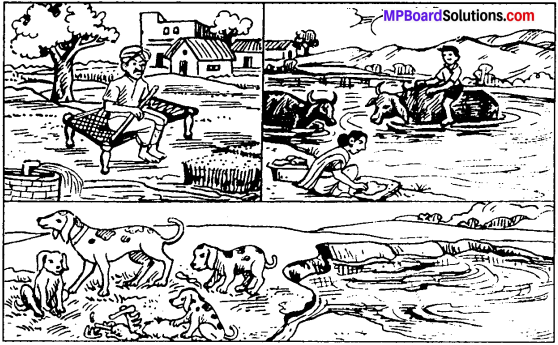 3. Write a short composition covering the details of the picture given below. [2009] 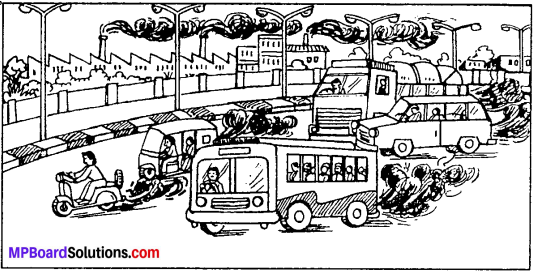 We hope the data given here will benefit you to the fullest extent at the time of preparation. For better understanding of English subject this MP Board Solutions for Class 11th English Composition Based on Visual Input PDF is the best resource. Download & ace up your preparation. Keep in touch with us and get the latest information on MP Board Textbook Solutions PDF.