Question 3.
What is meant by Accommodation Bill?
Answer:
These bills are written between the two parties for mutual financial help. No debtor-creditor relationship exists in such condition.

Question 5.
Explain renewal of a bill.
Answer:
Renewal of a bill refers to the cancellation of old bill and preparation of new bill for an extended period of time. It is done by the drawer on the request of drawee when the expressor his inability to pay.

Question 6.
What do you mean by renewal of a bill? Explain with an example.
Answer:
Renewal of a Bill:
Sometimes the acceptor of the bill found himself unable to meet his acceptance of the bill on the due date. So, he may request the drawer of the bill for the extension of time. If he agrees, the old bill is cancelled and a fresh one is drawn in place of the old one. For this extension of period, interest is charged and the bill is made with the principal amount and interest.

Example : Ram cancelled the old bill of Rs. 4,000 and draw a new bill on Mohan by charging interest at the rate of 6%, for a period of three months. The new bill should include noting charges of Rs. 10 also.

Solution :
Calculation of amount of the new bill

Question 7.
What is meant by dishonour of a bill? Explain in detail.
Or
Explain the procedure of dishonour of a bill.
Answer:
Non – payment of bill on due date due to any reason is known as dishonouring of a bill. In such a case, the holder of the bill can recover the amount from any of the previous endorser or drawer.
Due to the following causes a bill may be dishonoured:

When a bill is dishonoured, it is essential to certify it by a notary public by the holder in due course. He requests the drawee to make the payment. If again he denies to make payment then he approaches the court to recover the amount from him.

Question 8.
What entries will be passed in the books of drawer in case of dishonour of a bill in following cases:

Answer:
1. If the bill retained with drawer and he pays noting charges:
Drawee’s A/c Dr. – –
To Bills Receivable A/c –
To Cash A/c –
(Being bill dishonoured and noting
charges paid)

In promissory note, acceptance is not required because the writer himself is the debtor. In’ transactions which are related to promissory note, there are mainly two parties one is maker (debtor) and second is payee (creditor). In this writer promises to pay the amount after certain period. 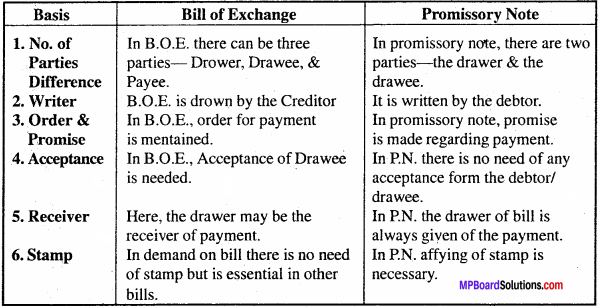 Question 3.
Explain in the following:

Answer:
1. Days of Grace:
Bill of exchange is written for a definite period. For the convenience of the acceptor, three extra days are allowed to him for making the payment. These extra day’s are known as ‘Days of Grace’. Three days are added to the due date of the bill.

3. Retirement of a bill:
Sometimes the acceptor makes the payment of the bill before the due date. In this situation, he does not pay full amount of the bill. The drawer agrees to deduct some amount. This amount is called rebate. This is called ‘Retirement of bill under Rebate’.

4. On the basis of receiver: