You will be given some points (verbal stimulus) or a-picture (visual stimulus) and will be asked to compose a short report, an article, a speech or description of about 80 words.

On the basis of the points given write para-graphs of about 80 words on the given topics.

1. God helps those who help themselves
A true saying ‘God helps those who help themselves’, expects to use our powers, given power to improve our lives, of community and country, more active are more successful, one should be independent for the country to progress.
Answer:
There is a saying which has a great deal of truth in it. It is “God helps those who help themselves.” And it is very true that God expects us to use all our powers. He has given us the power to improve our own lives, the life of the community and the life of our country. The more active we are in using our powers and talents the more likely we are to be successful in accomplishing our aims. We .should stand on our own legs and be independent if we really wish our country to progress.

2. Beware of False Friends
Forest, two travellers, meet bear, one climbs a tree, the other lies down as if dead, bear smells his head, goes away, first traveller ask what bear said, “Beware of friends who run away in danger. ”
Answer:
Ram and Shyam were once going through a forest. Shyam said to Ram, “Never fear ! No beast can harm you as long as I am with you”.

Just then they saw a bear coming towards them. Shyam climbed the nearest tree without caring for Ram. Ram (ay down on the ground as if dead. The bear smelt his head and went away.

Coming down Shyam asked Ram what the bear had said. Ram said, “Beware of false friends.”

3. Work and Play
Work and play-complements, each incomplete without other, sayings all works and nb play and all working days, holidays to play difficult like work, suitable admixture to be aimed in school, play also important part in education.
Answer:
Work and play are the complements of each other. In fact each is incomplete without the other. ‘Alt work and no play makesack a dull boy’ is true to the core, but the contrary, “if all working days had beeh holidays to play would have been as difficult as to work” holds equally good. Hence a suitable admixture, a due proportion of both is what should be aimed at in a school. For there is no denying the fact that play plays no less important a part in a child’s education than work.

4. Unemployment Problem
Unemployment problem-problem of providing work to the willing, capable people roam about for work, its involuntary joblessness, problem acute in our country, lives of unemployed are miserable, country cannot be a welfare state if the problem is unsolved.
Answer:
The problem of unemployment means the problem of providing work to those who are willing to work. A large number of educated and uneducated people, who are capable of work and are also willing to do it, roam here and there without anyone. So the problem of unemployment is involuntary joblessness. In our country this problem has assumed a large and acute form. There are a large number of pepole who are either partly employed or’ by holly unemployed. The lives of such people as weft as of their families are extremely miserable. India cannot claim to be a welfare state as long as this problem remains unsolved.

5. Cleanliness
Cleanliness consists in keeping everything clean, practised by all civilized nations, indispensable for 1 health, clean clothes and food save from diseases, next to godliness.
Answer:
Cleanliness consists in keeping our bodies, our clothes, our food and articles of daily use and the surroundings of our house clean and free from filth and impurities. Cleanliness is practised not by this nation or that, but by all civilized nations of the world. For the preservation of health, cleanliness is indispensable. Clean clothes and pure and clean food save a man from the attack of diseases which dirty clothes and impure food bring about. Cleanliness is next to godliness.

1. See the following picture and write a passage on it. 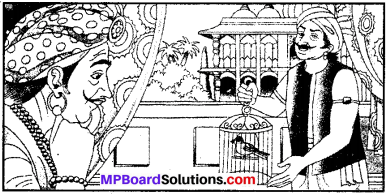 Answer:
Once a man saw a pigeon whose excreta turned into gold. He thought of capturing it and became successful in it. But then he thought that if the king came to know about it he would punish him. Therefore he decided to present it to the king. He told the king about its quality and gave it to him. The king was first surprised and then pleased to have it. He rewarded the man for giving him this special gift.

2. See the following picture and write a passage on it.

Answer:
A rich merchant had four sons. When the merchant became old his three elder sons took over his business and thinking him to be useless threw him out of their house. The youngest son took care of him and started a small business by selling his father’s gold chain. By the help of his father’s experience, he became rich very soon while the other three sons being inexperienced had great losses. They, therefore, came back to take their father with them and joined hands before him. But the merchant disagreed to go with them.

3. Write a short paragraph on the table given below :

Answer:
Some Major Rivers of India
India is a country full of natural wealth. There are a lot of rivers in India. Hardly there is any other nation in the world that can boast of having so many rivers.

4. Read the following flow chart describing the preparation of tea. Write a suitable paragraph with its help.

Answer:
Preparation of Tea
Take some water in a pan. Switch on the gas by opening its knob and light it. Heat the pan. Now add some tea to water and boil it. Now add some milk to it. Add sugar to Laste while letting it boil. Finally. switch off the gas and serve.

5. See the following picture and write a paragraph on it.

Answer:
Mahatma Gandhi or Mohandas Karam Chand Gandhi was born on 2nd October, 1869 at Porbandar in Gujarat. He fought for India’s independence using principles of non-violence and Ahimsa. Apart from making India free he worked for the. unity of Hindus and Muslims. He was against untouchability and loved Harijans and the poor. He helped all. So was called Mahatma Gandhi. He was also called ‘Bapu’ and ‘Father of the Nation.’ He was shot dead by Nathuram Godse on 30anuary, 1948.

6. Given below is a graph showing time spent on watching T.V. and on reading in an Indian family. Write a short paragraph emphasizing the need to promote reading. 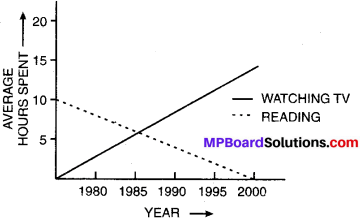 Answer:
Declining Trend in Book Reading
Reading of books is very useful and important work. It is a life-long source of pleasure, instruction and inspiration. Before the coming of T.V. people spent a great part of their time in reading. Since T.V. started, hours spent in reading has declined. The graph depicts these facts. Before 1980 there was no countrywide T.V. Hence people devoted in an average about 8 hours on reading. In 1985 watching of T.V. took about 3 hours while reading declined to 6 hours. In 1990, people spent about 12 hours in watching T.V. and reading came down to 5 hours. In 1995, reading further declined to 3 hours and I watching T.V took about 14 hours. In the year 2000, I people spent an average of more than 18 hours on watching T.V. while reading has almost come down to 2 hours. It is a sad phenomenon because watching T.V. only entertains us, it instructs less while reading provides, both “instruction and delight.”

We as a team believe the knowledge shared on our page regarding the MP Board Solutions for Class 10th English Writing Task Questions and Answers has cleared all your queries. For any other help don’t hesitate and leave us a comment so that we will get back to you at the soonest. Stay connected to our page to avail the latest updates regarding the MP Board Solutions for various subjects in a matter of seconds.