To the Cuckoo Textbook Exercises

Mp Board Class 10 English Chapter 4 To the Cuckoo Vocabulary

I. Note down the exact meaning of the following words:
wander, stride, stamp, creep, lotter, limp, stroll, rove.
Answer:
Word : Meaning
Wander: To walk slowly around without any direction or purpose.
Stride : To walk with long steps. Stamp : To crash by putting down the foot with force.
Creep : To crawl, sweeping the ground with the belly.
Loiter : To linger about in a public place usually with no obvious reason. To go with a lame gait.
Limp: To walk lamely Stroll To ramble (saunter from place to place).
Rove : To travel from one place to another, often with no definite purpose.

III. Use the following words in your own sentences.
wood, woods, sweet, sweets, blind, blinds issue, issues, spring, springs.
Answer:
Word : Usage
Wood : Our doors are made of wood.
Woods : Beasts live in the woods.
Sweet : She has a very sweet nature.
Sweets : A patient of diabetes should avoid eating sweets.
Blind : The old man has gone blind.
Blinds : Draw/lower the blinds on the curtain.
Issue : The Principal issued me the character certificate.
Issues : Alas! the old man has no issues.
Spring : Spring is the king of seasons.
Springs : Springs gush out of the mountains.

iv . Say the following words correctly,
though, thou, thee
Answer:

To the Cuckoo Comprehension

A. Answer the following questions in about 25 words.

Mp Board Class 10th English Chapter 4 Question 3.
What does the cuckoo bring to the poet?
Answer:
The cuckoo sings in the sunny and flowery valley. It moves the poet to supreme spiritual joy. It transports him to a land of bliss. It revives the memory of a visionary tale in him.

B. Answer the following questions in about 50 words.

To The Cuckoo Poem Summary In Hindi Question 1.
What does the poet seek to convey in the following stanza:

Thrice welcome, darling of the Spring!
Even yet thou art to me.
No bird but an invisible thing,
A voice, a mystery.
Answer:
The poet calls the cuckoo as the darling of spring. Its song is sweeter than the song of other birds. Even the spring season is proud of her. The poet welcomes her again and again. He considers the cuckoo like an invisible thing (fairy) whose voice is a mystery. He treats the cuckoo as a divine bird and not an earthly bird.

B. You must have learnt a lot about the various habits and behaviour patterns of different kinds of birds.
Tell your classmates about your favourite bird and its appearance.
Answer:
Some birds sing more than necessary. Many birds like gulls live in flocks. Some birds do not sing in the usual manner but make loud noises which serves the purpose of a song. A male grey heron gives a loud cry every half minute so long as it is unmatched. The woodpecker drums to attract the females.

My favourite bird is a male nightingale. While it sings it looks continuously round in all directions. It usually sings every morning from the same place. It stops singing when a female arrives. It becomes silent after it has mated. The nightingale is larger than the cuckoo.

To The Cuckoo Poem Questions And Answers Mp Board Question 1.
‘Nature is a great teacher,’ Elaborate the thought. (50 words)
Answer:
Wordsworth felt that nature leads one from joy to joy. He believed that nature was a living being. For him, nature was a supreme spirit. Its sole purpose was to delight and teach human beings. There is a mystic bond between nature and man. Nature reflects his own mood. He also saw hearing power in nature. Nature to Wordsworth was everything. Nature is ready to guide anyone who would care to be guided by her. Nature can teach about morals, evil and of good more than the sages. Nature never betrays the heart that loves it.

Class 10 English Chapter 4 To The Cuckoo Question 2.
‘God’s grandeur is reflected in the beauty of nature,’ Expand the idea. (150 words)
Answer:
Nature is the creation of.’God. Nature in all phases is beautiful. The barren deserts, the icy and windy hills are beauties of nature. The sight of springing leaves and flowers and other plants in the spring season are charming sights. We can enjoy the beauty of daffodils in April. The songs of,the flowers and old songs of the sea are equally enchanting. The sunrise and sunset, the warmth of spring season and the waving flowers gladden one’s heart. The arched white sails of the ship, the songs of the blossom and the rhythmic sweet tone of the sea are all enchanting. Nature is at its youth in spring season. Winter ends and trees are laden with beautiful flowers and fruits. The sight of hills, mountains, valleys, chasms, rivers, streams, springs and ravines are soothing to eyes. It seems that God’s grandeur is reflected in the beauty of nature.

Go to the library and find poems written on birds, such as: the skylark, the eagle, the peacock, the nightingale etc. Keep a collection of such poems in your project book.
Answer:
For self-attempt.

To the Cuckoo Additional Important Questions

A. Read the stanzas and answer questions that follow:

1. O Blithe newcomer ! I have heard,
I hear thee and rejoice:
O Cuckoo! shall call thee Bird,
or but a wandering Voice? (Page 23)

Questions:
(i) Name the poem and the poet.
(ii) Whom does the poet hear? How does he feel?
(iii) What does the poet mean by the expression “wandering voice”?
Answers:
(i) ‘To the Cuckoo’; William Wordsworth.
(ii) The poet hears the Cuckoo. He simply rejoices.
(iii) The “wandering voice” signifies that the Cuckoo wanders from one place to another and so does his cheerful and lively voice.

(b) The one word used for ‘sounding at high pitch’ in the above stanza is.
(i) shout
(ii) whisper
(iii) sing
(iv) weep
Answers:
(i) shout

3. Of visionary hours.
Thrice welcome, darling of the Spring!
Even yet thou art to me
No bird, but an invisible thing.
A voice, a mystery; (Page 24)

(b) The one word used for ‘loved one’ in the above stanza is
(i) visionary
(ii) darling
(iii) spring
(iv) invisible
Answers:
(ii) Darling

I. Match the following:

II. Pick up the correct choice:

1. The poet hears threefold shout of the Cuckoo.
2. The Cuckoos shout seems to pass from hill to hill.
3. The Cuckoo babbles only to the vale of sunshine and flowers.
4. The poet calls the cuckoo the bringer of the spring.
5. The poet often roved through woods and on the green to seek the Cuckoo.
Answer:
1. False, 2. True, 3. True, 4. False, 5. True.

IV. Fill in the following blanks:

V. Fill in the following blanks:

B. Short Answer Type Questions (In about 25 words)

Question 2.
When and where did the poet see the Cuckoo?
Answer:
It was the spring season. The poet, Wordsworth, was lying on the grass in a valley, full of flowers. The valley was surrounded by hills. It was an enjoyable season both for the poet and the Cuckoo. The poet saw the Cuckoo flying from hill to hill.

Question 3.
Why did Wordsworth rove through the woods and on the green during his schoolboy days?
Answer:
Wordsworth was a lover and worshipper of nature ever since his school days. He used to listen to the Cuckoo’s voice. He found it quite charming. Then he looked around in bushes, trees and sky. As he could not find the Cuckoo anywhere he tried to seek it through woods and on the green.

Question 4.
How does the poet feel indebted to the Cuckoo?
Answer:
The poet calls the Cuckoo a God’s gifted creature. She spreads gladness all around the poet. She brings harmony to nature. She is like an enigma that cannot be explained. The poet feels indebted to the cuckoo for filling his heart and the environment with joy and happiness. She soothes his soul and calms his nerves. Her song sends a wave of contentment to him. He wonders whether the voice is of a bird or a human.

Question 1.
Describe Wordsworth as the poet of nature.
Answer:
Wordsworth was a great priest of nature. Nature to him was everything. His political frustration increased his interest in nature. His passion mingled itself with the landscape. Wordsworth’s attitude towards nature continued changing throughout his life. It started with animal and sensuous pleasures and ended on a mystic night. God and nature became one for him. He accepted nature as his spiritual guide and teacher. It led him from sheer joy to joy. Nature for him was like a nurse who healed his wounds.

Question 2.
Compare Wordsworth with Coleridge.
Answer:
Coleridge’s attitude to nature in his early phase of poetic career was similar to Wordsworth’s. Both of them felt disillusioned with the consequences of the French Revolution. Both sought solace in nature. Both felt nature to be a guiding spirit and teacher. Once Coleridge made his weeping infant smile by treating him to the beauty of the moon. In the beginning Coleridge believed along with Wordsworth that ’Nature never betrays the heart that loves her. It leads one from shees joy to joy.’

Question 3.
Contrast Coleridge with Wordsworth.
Answer:
With the passage of time Coleridge realised that joy cames from within, not from external nature. He also failed to find the same healing power in nature as Wordsworth did. He also called nature as something essentially external, which only mirrors a man’s mood, be it of joy or sorrow’. He called passion and life as internal, having nothing to do with nature or anything external. But for Wordsworth nature was everything. It gave him real pleasure.

To the Cuckoo Introduction

The poet welcomes the cuckoo as a ‘Blithe Newcomer’. The bird’s song gives him immense joy. It moves him to supreme spiritual joy.

To the Cuckoo Summary in English

William Wordsworth welcomes the cuckoo as a ‘Blithe Newcomer’. Its song captivates him. The cuckoo wanders from hill to hill. Sometimes the poet hears its voice as if it is very close to him. At other times it, goes far. The poet calls her ‘darling of the spring’ and ‘a mysterious voice’.As a school boy, the poet heard the cuckoo’s voice. He loved the voice but never saw the cuckoo. He longs for the return of the old golden times. He calls the bird ‘blessed’. She has turned the ‘unreal’ earth into a fairy place.

To the Cuckoo Summary in Hindi 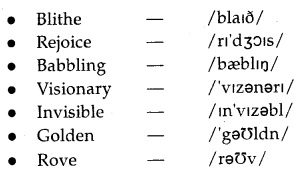 We as a team believe the knowledge shared on our page regarding the MP Board Solutions for Class 10th English Chapter 4 To the Cuckoo Questions and Answers has cleared all your queries. For any other help don’t hesitate and leave us a comment so that we will get back to you at the soonest. Stay connected to our page to avail the latest updates regarding the MP Board Solutions for various subjects in a matter of seconds.