Structure of the Atom Intext Questions

Structure of the Atom Intext Questions Page No. 47

Question 2.
If an atom contains one electron and one proton, will it carry any charge or not?
Answer:
The atom will not contain any charge and will be electrically neutral because both electron and proton will balance each other.

Structure of the Atom Intext Questions Page No. 49

Question 1.
On the basis of Thomson’s model of an atom, explain how the atom is neutral as a whole.
Answer:
According to Thomson’s model, an atom consist of a positively charged sphere and electrons are embedded in it. So, both charges are equal which makes the atom electrically neutral. 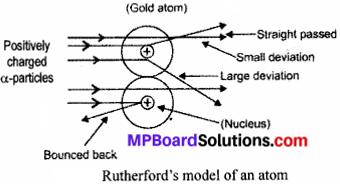 Question 3.
Draw a sketch of Bohr’s model of an atom with three shells.
Answer:

Question 4.
What do you think would be the observation if the a-particle scattering experiment is carried out using a foil of a metal other than gold?
Answer:
The observations would be same as that of gold foil.

Structure of the Atom Intext Questions Page No. 49

Structure of the Atom Intext Questions Page No. 50

Question 1.
Write the distribution of electrons in carbon and sodium atoms.
Answer:
Atomic number of Carbon = 6

Structure of the Atom Intext Questions Page No. 52

Question 1.
How will you find the valency of chlorine, sulphur and magnesium?
Answer:
We know that valency is the number of electrons lost, gained or shared by atom to become stable or to complete 8 electrons in the shell.
Now, Chlorine,
Atomic number = 17

It will lose 2 electrons from its outermost shell to become stable.
∴ Its valency will be ‘2’.

Structure of the Atom Intext Questions Page No. 52

Structure of the Atom Intext Questions Page No. 53

Question 1.
For the symbol H, D, and T tabulate three sub – atomic particles found in each of them.
Answer:
H, D, and T stand for protium, deuterium and tritium as isotopes of hydrogen atom.
Table: 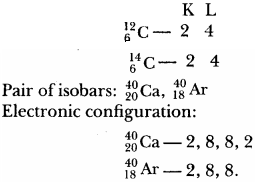 Question 1.
Compare the properties of electrons, protons and neutrons.
Answer:

Question 2.
What are the limitations of J.J. Thomson’s model of the atom?
Answer:
J.J. Thomson’s model explained the existence of positive charge in the form of sphere and electrons embedded in it. But, he was unable to explain the Rutherford’s gold foil experiment in which most of positive α – particles passed straight, existence of electrons in the circular path and protons at the centre of the atom.

Question 3.
What are the limitations of Rutherford’s model of the atom? 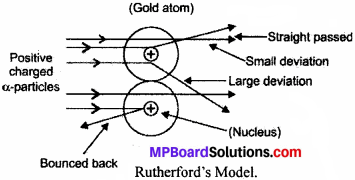 Answer:
Rutherford explained that electrons revolve in a circular path which is found contradictory in terms of stability of atom. Because electrons are negatively charged and when they move continuously in circular paths then they should lose their energies and finally, fall into the positively charged nucleus making atoms unstable and collapse.

Question 5.
Compare all the proposed models of an atom given in this chapter.
Answer: 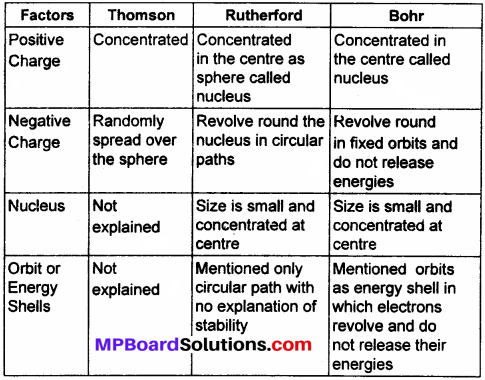 Question 6.
Summarise the rules for writing of distribution of electrons in various shells for the first eighteen elements.
Answer:
Rules:

(a) Maximum electrons present in a shell is given by 2n2 whereas n is the number of that shell.
Like,

(b) The outermost shell can have maximum of 8 electrons.
(c) Electrons cannot be occupied in a shell till its inner shells or orbits are completely filled.

Question 7.
Define valency by taking examples of silicon and oxygen.
Answer:
Valency is the combining capacity of an atom to become electrically stable. Or It means how many electrons are lost or gained by an atom to become stable.
In Silicon,

It has 4 valence electrons.
So, it will lose 4 electrons to become stable.
∴ Its valency is 4.
In Oxygen,

(ii) Mass number: It is equal to the sum of total number of protons and neutrons in the nucleus.
E.g.,

(iii) Isotopes: These are atoms of the same element having same atomic number, but different mass number.
E.g.

(iv) Isobars: These are the atoms of different elements having different atomic number but same mass number.
E.g.

Now, if Na loses 1 electron then it will become Na+.

Question 13.
Composition of the nuclei of two atomic species X and Y are given as under

Question 14.
For the following statements, write T for True and F for False.

Structure of the Atom Additional Questions

Question 1.
Which is a positive sub – atomic particle?
(a) Proton
(b) Neutron
(c) Electron
(d) None of these.
Answer:
(a) Proton

Question 5.
Name the central part of an atom where protons and neutrons are held together.
Answer:
Nucleus.

Question 6.
What is Alpha Particle?
Answer:
It is a Helium ion (He2+) which has 2 units of positive charge and 4 units of mass.

Question 7.
What are cathode rays?
Answer:
Cathode rays are a beam of fast moving electrons.

Question 8.
What was the main drawback of Rutherford’s model of the atom?
Answer:
Inability to explain the stability of atom.

Question 12.
Define valency.
Answer:
It is the combining capacity of an atom to become electrically stable.

Question 15.
Which radioactive Isotope is used in treatment of goitre?
Answer:
Iodine – 131.

(c) Atomic number: It is the number of protons present in the nucleus of an atom. It is represented by the letter ‘Z’.

(e) Energy Shells: These are fixed circular paths around the nucleus of an atom in which electrons revolve continuously with high speed. These are also called orbits. They are represented by the alphabets K, L, M, N.

(f) Valency: It is the combining capacity of an atom to become electrically stable, or it also means the number of valency electrons lost or gained by an atom to complete the eight electrons in the valence shell.

(g) Octet: The completely filled outermost shell like L, M or N with 8 electrons is called an octet. When an atom completes its octet, then it become stable.

(h) Isotopes: These are atoms of same element having same atomic number, but different mass number.

(i) Isobars: These are atoms of different elements having different atomic number but same mass number.
E.g.

Question 2.
Differentiate between:
(a) Electrons and protons.
(b) Atomic number and mass number.
(c) Isotopes and isobars.
(d) Valence electrons and valency.
Answer:
(a)

Question 9.
What are radioactive isotopes? Write down the type of isotopes used in:
(a) Tracing blood clots and tumours in human body
(b) Treatment of cancer
(c) Treatment of Goitre
(d) Nuclear reactor as a fuel.
Answer:
Radioactive isotopes: These are unstable isotopes due to extra neutrons in their nucleus and emits different types of radiations.
Examples: 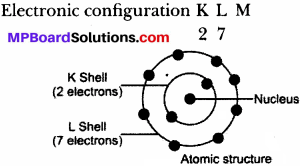 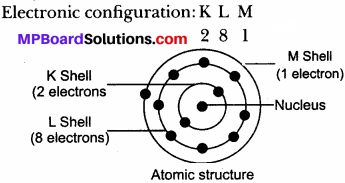 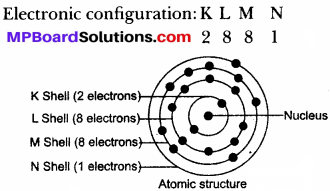 Question 13.
What are noble gases? Why they are stable? Give three examples.
Answer:
Noble gases are the elements which are stable and do not take part in chemical reaction.
They are stable because they have completely filled outer- most shell with 8 electrons
example:

Helium is the only noble gas which has 2 electrons in outermost shell.

Question 14.
Write all the Isotopes of:

Drawback: Rutherford’s model did not explain the stability of the atom. He proposed that electron revolves around the nucleus in circular paths. So, electrons should radiate their energies as they are continuously in circular motion. Then, they should fall into the positively charged nucleus making the atom unstable and collapse. 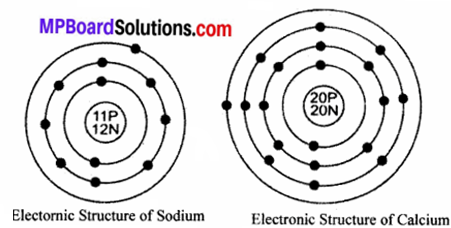 Since, the outermost shell of A is complete, it would be inert and will not react. Whereas element B require two atoms to complete its octet. Therefore, B would be more reactive.

Structure of the Atom Value Based Question

Question 1.
Shivek could not solve the following question in the group. His group – mate explained him and solved his difficulty.
The question was as follows:

What information do you get from the given figure about the atomic number, mass number and valency of the given atom ‘X’: