Question 2.
Write the names of any two mountains and any two plateaus of Asia.
Answer:
Name of two mountains:

physical divisions:
1. The North Lowlands:
It is a vast plain which extends between the Ural Mountains in die west, Lena river in the east and the Central Mountains in the south, known as the ‘Siberian Plain’, it is drained by rivers like Ob, Yenisei and Lena Lake Baikal, die deepest lake of die world is located in Siberia.

2. The Central Mountains:
The folded mountains and plateaus lie in the south of the northern lowlands. The Pamir plateau is a meeting place of several ranges, which form the Pamir knot This plateau is known as die ‘Roof of the World’, because it is the highest plateau in the world. The Tibetan plateau lies to the east of the Pamir plateau. Himalayas are the highest mountain ranges of the world. Mount Everest is situated in the Himalayas.

3. The Southern Plateaus:
To the south of the central mountain belt, there’ are some plateau which form the major part of the peninsula projecting southwards from the mainland of Asia. These plateaus are the plateau of Arabia, the Deccan plateau and the plateau of Yunnan.

4. The Great River Valleys:
To the east and south of Asia are found riverineplains. In the south are the Sindhu, Ganga, Brahmaputra plains, in the southeast are the plains formed by rivers Irrawady, Salvin, Yang-Tse-Kiang, Sikiang, Minang- Mekong and Amursar.

5. The Island Groups:
Some groups of islands are situated to the south-east and east of the continent of Asia. There are three major island groups-Indonesia, Philippines and Japan.

During the summer season die rays of the sun falls vertically on the Northern Hemisphere. The temperature rises and a low – pressure area is developed over Central Asia. The moisture laden winds start blowing from the seas to the low pressure. These winds are known as southwestern monsoon winds. 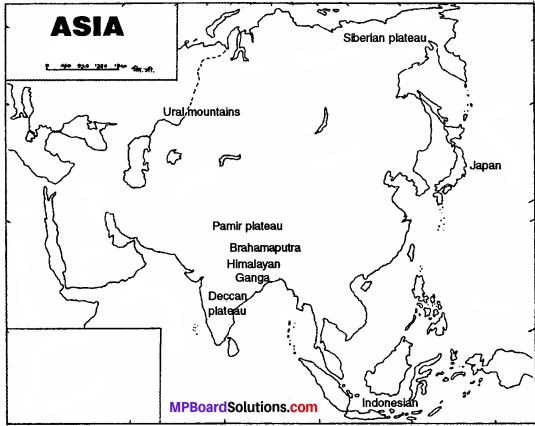