Question 2.
Boojho has seen in television programmes that whales and dolphins often come up to the water surface? They even release a fountain of water sometimes while moving upwards? Why do they do so?
Answer:
Whales and dolphins take in air during inhalation. They exhale out the air on the surface. The water vapour condenses and we see the condensed water vapour as the fountain.

Question 3.
Paheli wants to know whether roots, which are under ground also take in oxygen? If so, how?
Answer:
Yes. Roots take up air from the air spaces preseht between the soil particles.

Activity – 2
Figure shows the various activities carried out by a person during a normal day. Can you say in which activity, the rate of breathing will be the slowest and in which it will be the fastest? Assign numbers to the pictures in the order of increasing rate of breathing according to your experience. 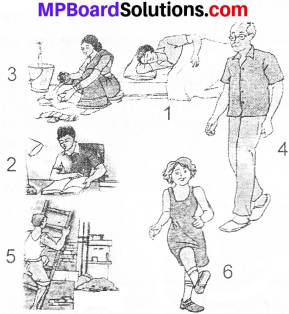 Question 3.
Why do we often sneeze when we inhale a lot of dust laden air?
Answer:
We sneeze to get rid of the unwanted particles like dust from air body. It allows only clean and dust free air to enter our body.

Question (a)
In cockroaches, air enters the body through?
(a) lungs
(b) gills
(c) spiracles
(d) skin.
Answer:
(c) spiracles

Question (b)
During heavy exercise, we get cramps in the legs due to the accumulation of?
(a) carbon dioxide
(b) lactic acid
(c) alcohol
(d) water.
Answer:
(b) lactic acid

Question 7.
Mark if the statement is true and if it is false:

Question 8.
Given below is a square of letters in which are hidden different words related to respiration in organisms. These words may be present in any direction – upwards, downwards, or along the diagonals. Find the words for your respiratory system. Clues about those words are given below the square? 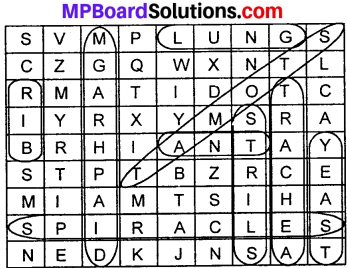 Question 1.
Observe fish in an aquarium. You will find flap like structures on both sides of their heads. These are flaps which cover the gills. These flaps open and close alternately. On the basis of these observations, explain the process of respiration in the fish?
Answer:
Do with the help of your subject teacher.

Question 2.
Visit a local doctor. Learn about the harmful effects of smoking. You can also collect material on this topic from other sources. You can seek help of your teacher or parents. Find out the percentage of people of your area who smoke. If you have a smoker in your family, confront him with the material that you have collected?
Answer:
Do yourself.

Question (b)
In …………………… respiration, there is an exchange of gases between the cells and the blood?
(a) aerobic
(b) anaerobic
(c) external
(d) internal.
Answer:
(d) internal.

Question (c)
In the cell, the food (glucose) is broken down into carbon dioxide and water using?
(a) hydrogen
(b) nitrogen
(c) oxygen
(d) none of these.
Answer:
(c) oxygen

Question 1.
Fill in the blanks:

Question 2.
Write the equation for breakdown of food in anaerobic respiration?
Answer:

Question 3.
Write the equation for breakdown of food in aerobic respiration?
Answer:

Question 4.
What are anaerobes?
Answer:
There are some organisms such as yeast that can service in the absence of air. They are called anaerobes.

Question 5.
What is yeast?
Answer:
Yeast is single – celled organisms.

Question 6.
Write the uses of yeast?
Answer:
Yeast respire anaerobically and during this process yield alcohol. So, they are used to make beer and wine.

Question 8.
Give an example of an oxygen respiration?
Answer:
In human beings.

Question 11.
Name the parts of respiratory system of human?
Answer:

Question 13.
Define respiration?
Answer:
The process of breaking down of food by using oxygen, to form carbon dioxide and release energy required for various life activities, is called respiration.

Question 14.
Name the fuels used for the production of energy during respiration?
Answer:
Glucose is oxidized to give out energy.

Question 15.
Which organs of plants participate in respiration?
Answer:
There is no special organ in plants for breathing.

Question 17.
What is importance of hairs present in the noise?
Answer:
These small hairs present in nose act as filters. These prevent dust particles and harmful germs to enter into respiratory track.

Question 18.
Name the organs of the body from which blood freshly enriched with oxygen goes into the heart?
Answer:
The lungs helps the blood to get freshly enrichment of oxygen.

Question 20.
What is breathing?
Answer:
The process of taking oxygen and leaving of carbon dioxide during respiration is called breathing.

Question 21.
Write the name of gases which are involved in breathing?
Answer:
Carbon dioxide and oxygen.

Question 23.
What do we exhale?
Answer:
We exhale air rich in carbon dioxide.

Question 26.
Which is the respiratory organ for earthworm?
Answer:
Skin.

Question 27.
Can we survive in water?
Answer:
No.

Question 28.
How do fish breathe under water?
Answer:
Gills in fish help them to use oxygen dissolved in water. Gills are projections of the skin. Gills are well supplied with blood vessels for exchange of gases.

Question 29.
What is the function of gills?
Answer:
The fishes and other aquatic animals respire through gills or similar structure.

Question 30.
Can you guess what would happen if a potted plant is over watered?
Answer:
The roots will not get air to respire, so the roots will die and hence the whole plant will also die.

Question 2.
Define respiration with the help of chemical equation?
Answer:
The process in which the oxidation of absorbed food is takes place by the CO2 which is inhaled by breathing and energy is released out is called respiration. Chemical equation of nutrition is as follows:
C6H12O2 + 6O2 → 6CO2 + 6H2O + 673 kcal (Energy)

Question 6.
Describe the importance of respiration in plants?
Answer:

Question 7.
Name the organs associated with the following functions:

Question 9.
Name the major components of urine?
Answer:
The kidney, ureter, bladder, and urethra are the organs used in the removal of urine from the body. Renal artery carry urea and uric acid along with the large amount of water with the blood into the kindneys, when this blood enters into glomerulus, the solid wastes filter here while the water is diffused out from the network of blood capillaries into the uriniferous tubules. The ques mixture is called as urine.

Question 11.
What is saliva? What are the functions of saliva?
Answer:
Saliva is a digestive secretion produced by three layered salivary glands, the paroted submaxillary and sunblingual present in our mouth cavity. This soften and lubricants food for easier swallowing and converts starch into reducing sugars. The salivary amylase. enzyme of saliva acts of starch in a neutral medium.

Question 12.
How does the food digested in the stomach?
Answer:
After some time from mouth the food reach inside the stomach. The gastric glands of stomach secrete the gastric juices. The gastric juice containes three enzymes. These are pepsin, renin and HCI. The HCI makes the medium acidic, and inhibites the bacterial growth and prevents the food. The renin curdiles the milk protein to be hydrololysed by pepsin. The pepsin reacts with proties and changes into peptides.

In animals some organs like gills and lungs are developed for the purpose of exchange of gases. The amount of CO2 produced after respiration cannot be utilised by animals as in plants. This is also true for the production of oxygen which is required for respiration. Mitochondria are the site of respiration in both plants and animals.

The process of break – down of glucose in the presence of oxygen and some enzymes into CO2. And water, which is accompanied with release of energy is very complex. Materials like proteins and fats are also consumed during respiration to produce energy.

Question 3.
Draw the labelled diagram to show respiratory system in man?
Answer:
The process of respiration is aimed to release energy 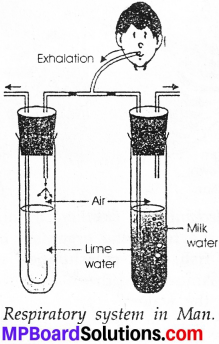 Question 4.
What is the difference in the amount of carbon choxide in the inhaled and the exhaled air? How will you test the presence of CO2 in the exhaled air?
Answer:
Excess carbon dioxide is present in exhaled air as compared inhaled air.

Test to indicate the presence of CO2 in the exhaled air:
Take two test tubes. Fill each of them half with freshly prepared lime water. Fix stoppers with two holes in both the test tubes. Insert glass tubes in both the stoppers. The lime water through which exhaled air is passed turns milky. This shows that more CO2 is present in exhaled air. 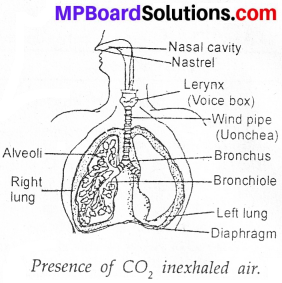 Question 5.
Draw diagrams to show movements of rib and diaphragm during breathing?
Answer: 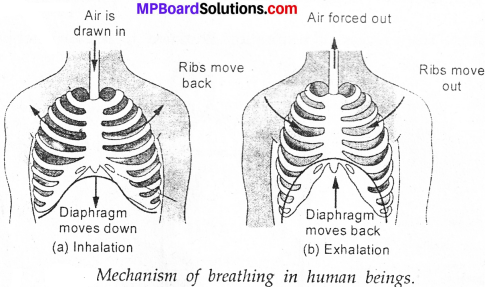 Question 6.
How do the following organism breathe? Amoeba, fish, frog, grasshopper, earthworm?
Answer:
Amoeba:
Amoeba breathes by diffusion of gases in between body surface and the water.

Fish:
Fish breathe with gills. The gills are special organs. They help fish to extract dissolved oxygen from the water.

Frog:
Frog can breathe through skin and lungs. In water if breathes through skin whereas in air through lungs.

Grasshopper:
The grasshopper and other insects have holes and air tubes those help them to breathe.

Earthworm:
It breathes through its moist body surface.

Question 7.
Describe the breathing in cockroach with diagram?
Answer:
A cockroach has small openings on the sides of its body. Other insects also have similar openings. These openings are called spiracles, bisects have a network of air tubes called tracheae for gas exchange. Oxygen rich air rushes through spiracles into the tracheal tubes, diffuses into the body tissue, and reaches every cell of the body. Similarly, carbon dioxide from the cells goes into the tracheal tubes and moves out through spiracles. These air tubes or tracheae are found only in insects and not in any other group of animals. 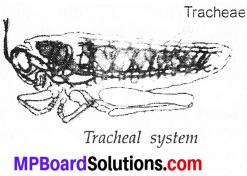