Question 3.
You have to show that ∆AMP ≅ ∆AMQ
In the following proof, supply the missing reasons. 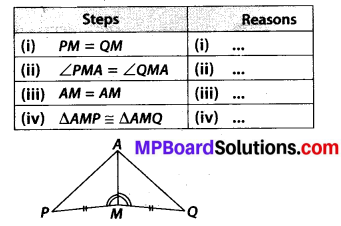 Solution:
(i) Given
(ii) Given
(iii) Common
(iv) SAS congruence criterion, as the two sides and the angle included between these sides of ∆AMP are equal to corresponding sides and included angle of ∆AMQ.

Question 4.
In ∆ABC, ∠A = 30°, ∠B = 40° and ∠C = 110°
In ∆PQR, ∠P = 30°, ∠Q = 40° and ∠R = 110°
A student says that ∆ABC ≅ ∆PQR by AAA congruence criterion. Is he justified? Why or why not?
Solution:
No. This property represents that these triangles have their respective angles of equal measure. However, this does not give any information about their sides. The sides of these triangles may have a ratio different from 1 : 1. Therefore, AAA property does not prove that two triangles are congruent.

Question 5.
In the figure, the two triangles are congruent. The corresponding parts are marked. We can write ∆RAT ≅ ? 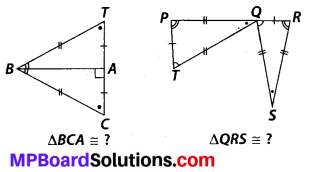 Here, ∆ABC and ∆PQR have the same area and are congruent to each other also. Also the perimeter of both the triangles will be the same.

Here, ∆ABC and ∆PQR have the same height and same base. Thus, their areas are equal. However, these triangles are not congruent to each other. Also, the perimeter of both the triangles will not be the same.

Question 8.
Draw a rough sketch of two triangles such that they have five pairs of congruent parts but still the triangles are not congruent.

Question 9.
If ∆ABC and ∆PQR are to be congruent, name one additional pair of corresponding parts. What criterion did you use? 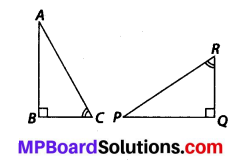 Solution:
Given that, ∠ABC = ∠FED = 90° and ∠BAC = ∠EFD
The two angles of ∆ABC are equal to the two respective angles of ∆FED. Also, the sum of all interior angles of a triangle is 180°. Therefore, third angle of both triangles will also be equal in measure.
∴ ∠BCA = ∠EDF
Now, in ∆ABC and ∆FED,
∠ABC = ∠FED, BC = ED and ∠BCA = ∠EDF
⇒ ∆ABC = ∆FED
(ASA congruence criterion)