Question 3.
In the coagulation of As2S3 colloidal solution value of whose coagulating power will be minimum :
(a) NaCl
(b) KCl
(c) BaCl2
(d) AlCl3.
Answer:
(d) AlCl3.

Question 2.
Answer in one word/sentence :

Question 3.
Fill in the blanks :

Question 4.
Match the following :
I.

Question 1.
Why does physisorption decreases with the increase of temperature? (NCERT)
Answer:
It is an exothermic process
Solid + Gas ⇌ Gas/Solid + Heat
Thus, when temperature is raised, reaction proceeds in backward direction and gas adsorbed gets released. It is accordance to Le – Chatelier’s principle.

Question 2.
Why is it necessary to remove CO when ammonia is obtained by Haber’s process? (NCERT)
Answer:
For the preparation of ammonia in Haber’s process solid catalyst is used. It is necessary to remove the CO produced because the gas reacts with iron and forms Fe(CO)5 which exist in liquid state at the temperature of the chamber and obstructs in the production of NH3 because at high temperature CO and H2 react by which production of ammonia decreases. In short CO acts as poison for the iron catalyst used in the process. It is therefore, necessary to remove CO.

Question 3.
Why is adsorption always exothermic? (NCERT)
Answer:
Adsorption leads to decrease in disorder, thus ∆S = +ve. For the process to be performed value of ∆G should be -ve. Thus, in equation ∆G = AH – T ∆S, ∆G will be negative when ∆H will be negative i.e., exothermic. Thus, adsorption is an exothermic process.

Question 4.
What is adsorbent?
Answer:
Solid substances which adsorb the gases or solution are called adsorbent. Like : animal charcoal, silica etc.

Question 5.
What are adsorbate?
Answer:
Gas molecules, vapours or ions which are adsorbed on the surface of solids are called adsorbate.

Question 7.
How is rain possible by spraying silver iodide on clouds?
Answer:
Clouds are charged due to colloidal nature. Silver iodide is an electrolyte. Spraying it on clouds lead to coagulation by which it rains.

Question 9.
What happen when a freshly precipitated Fe(OH)3 is shaken with little amount of dilute solution of FeCI3?
Answer:
A reddish brown colloidal solution of Fe(OH)3 is obtained. This process is called peptization. The Fe+3 ions from FeCl3 are absorbed on the surface of the precipitate and form positively charged colloidal solution.
Fe(OH)3 + Fe+3 → [Fe(OH)3] Fe+3

Question 12.
How does emulsifier provide stability to emulsion? Write the name of two emulsifiers?
Answer:
For the stability of emulsion, emulsifier is added. Emulsifier forms an interfacial film between the emulsifying medium and the suspended particles. For an oil/water emulsion, protein, gum acts as an emulsifier and for water/oil emulsion salts of fatty acids and heavy metals are the main emulsifier.

Question 1.
What are emulsions? What are their different types? Give examples of each type. (NCERT)
Answer:
The colloidal system in which dispersed phase and dispersion medium both are liqvid, is called emulsion.

Types of emulsions :
1. Oil in Water type (O/W) : In this type of emulsion small droplets of oil are dispersed in the water or dispersion medium, example Milk, Vanishing cream.

2. Water in Oil (W/O) : In this type of emulsion, small quantity of water is dispersed in the form of droplets in oil (dispersion medium), example Butter, Cod – liver.

Question 2.
What is the difference between multimolecular and macromolecular colloids? Give one example of each. How are associated colloids different from these two types of colloids?
Answer:
1. Multimolecular collodis:
In this type of colloids the colloidal particles consist of aggregates of atoms or small molecules with diameter of less than 1 nm. For example, a gold sol may contain particles of different sizes having several atoms of gold. Similarly sulphur sol contains about one thousand of S8 molecules. These are held together by van derwaals forces.

3. Associated colloids (Micelles):
There are certain substances which behave as normal, strong electrolytes at low concentration, but exhibit colloidal properties at higher concentrations due to the formation of aggregated particles. These are called Micelles. These substances are also called Associated Colloids. Surface active agents like soaps and detergents are of this class.

Question 3.
Explain, what is observed :

Example:
If a small amount of gum, gelatin or starch is added to As2S3sol, its coagulation of NaCI solution is prevented. Thus starch, gum or gelatin protects the As2S3 sol.

Question 5.
Give the method of preparation of colloidal solution of ferric hydroxide and sulphur in water.
Answer:
1. To prepare sol of ferric hydroxide, FeCl3 solution is added in the boiling water dropwise with shaking. Excess of FeCl3 and HCl are separated by electrodialysis and sol is also stablized by this.
FeCl3 + 3H3O → Fe(OH)3 + 3HCl

Question 6.
What is catalysis? Explain induced catalysis with an example.
Answer:
Catalysis:
A catalyst is a substance which alters the rate of chemical reaction without being used in the reaction and the phenomenon is known as catalysis.

Induced Catalysis:
In induced catalysis, one reaction already taking place, catalyse the other reaction also which does not occur separately.

Example:
Sodium sulphite (Na2SO3) oxidise in the atmosphere easily while sodium arsenite (Na2AsO3) does not oxidise in atmosphere separately. When (Na2SO3) and Na3AsO3 both are kept together, both are oxidised.

Thus, to coagulate negative sol, the coagulating power of different cations are found to be in the order :
Al3+ > Ba2+ > Na+

Similarly, for the coagulation of a positive sol of Fe(OH)3, the coagulating power of different anions is found to be in the order :
PO43- > SO42- > Cl–

Catalytic poison : Substances which are used to reduce the activity of catalyst are known. 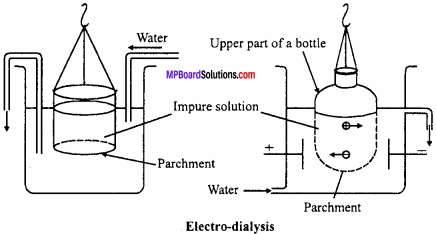 Artificial kidney used in medical science works on the principle of dialysis.

Question 11.
What is ‘Gold number’? Explain with example.
Answer:
Gold Number:
Protective actions of different lyophilic colloids are compared with gold number. Gold number can be defined as:
“Gold number is the number of miligrams of protective colloid (Lyophilic) which on adding prevents the coagulation of 10 ml. standard gold sol by addition of 1 ml. of 10% NaCl solution.” Thus smaller the value of gold number, higher is it’s protecting action. For example, gold number of gelatin and gum arobic are 0.005 and 0.15 respectively. It means gelatin is better protective colloid because it’s only 0 005 mg quantity is required to prevent coagulation if 10 ml Au sol by addition of 1 ml. 10% NaCl.

Answer:
1. Milk is an emulsion of fats dispersed in water. Albumin and caesin are emulsifiers. Addition of acid destroys emulsifiers and hence milk gets coagulated.

2. In impure water, soil particles, bacteria and other soluble impurities are dissolved. When alum is added, the Al+3 ion present in alum destroys the negative charge of impure water. Due to neutralization of charge the impurities are coagulated and settle down.

3. In the river water negatively charged particles of soil and sand are present. When river water meets sea – water, various salts present in sea water causes coagulation and soil particles etc. are settle down. Thus a delta is formed.

Question 14.
Explain positive and negative catalysis with example.
Answer:
Positive Catalysis:
When the velocity of any chemical reaction increases with the presence of catalyst, this type of catalysis is called positive catalysis. 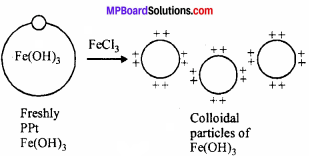