Question 1.
Explain antibiotic resistance observed in bacteria in light of Darwinism selection theory.
Answer:
Darwinism theory of natural selection states that environment selects organisms with favourable variations and these organisms thus, survive and reproduce. It is observed when bacterial populations are exposed to certain antibiotic, the sensitive bacteria could not tolerate and hence, died due to the adverse environment. Whereas some bacteria that developed mutation became resistant to the particular antibiotic and survived. As a result such resistant bacteria survive and multiply quickly as compared to other sensitive bacteria. So, the whole population is regained by multiplication of resistant variety and antibiotic resis¬tant gene becomes widespread in the bacterial population.

Question 2.
Find out from newspapers and popular science articles any new fossil dis-coveries or controversies about evolution.
Answer:
Fossils of dinosaurs have revealed the evolution of reptiles in Jurassic period. As a result of this evolution of other animals such as birds and mammals has also been discovered. However, two unusual fossils recently unearthed in China have ignited a controversy over the evolution of birds confiiciusomis is one such genus of primitive birds that were crow sized and lived during the Cretaceous period in China.

Question 3.
Attempt giving a clear definition of the term species.
Answer:
A species generally includes similar organism. Members of this group can show interbreeding. Similar group of genes are found in the members of same species and this group has capacity to produce new species. Every species has some cause of isolation which intruped the interbreeding with nearest reactional species which is refer as reproductively isolated. 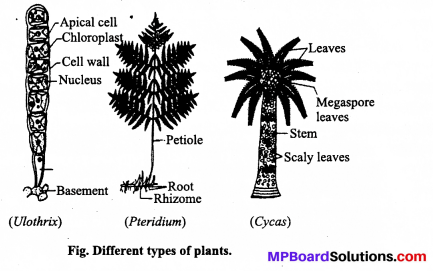 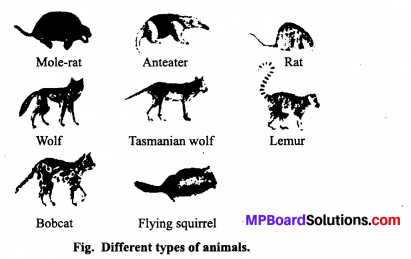 Question 8.
Describe one example of adaptive radiation.
Answer:
Darwin’s finches in the Galapagos Island once had a common ancestor but with evolution, they modified into different types according to their food habitat. 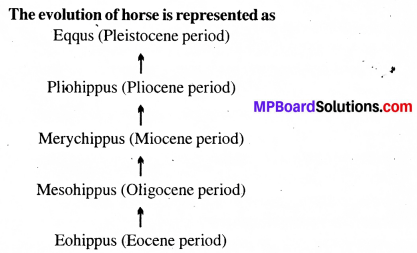 Equus : Pliohippus gave rise to Equus or the modern horse with one toe in each foot. They have incisors for cutting grass and molars for grinding food.

Evolution Other Important Questions and Answers

Question 5.
Who gave the theory of inheritance of acquired, characters :
(a) Charles Darwin
(b) Lamarck
(c) Valles
(d) de Vries.
Answer:
(b) Lamarck

Question 8.
‘Atmosphere is a factor of variation’ who gave this theory :
(a) Mendel
(b) Darwin
(c) Lamarck
(d) Laplace.
Answer:
(c) Lamarck

Question 10.
Which antibiotic is used to Replica planting experiment of Ladderberg:
(a) Penicillin
(b) Streptomycin
(c) Erythromycin
(d) Neomycin.
Answer:
(a) Penicillin

Question 14.
Who discover the uses and experiment of organs:
(a) Valles
(b) Lamarck
(c) Darwin
(d) de Vries
Answer:
(a) Valles

Question 19.
Which era are called as golden period of Reptilia or Dinosaurs :
(a) Mesozoic
(b) Cenozoic
(c) Palaeozoic
(d) Cenozoic.
Answer:
(a) Mesozoic

Question 23.
Species which are similar in shape and different in reproduction are called :
(a) Sub-species
(b) Sibling
(c) Isotopic
(d) Allopetric species.
Answer:
(c) Isotopic

Question 24.
Name the ship which had been used by Darwin for journey :
(a) Ciloge
(b) Beagle
(c) Seagull
(d) Atlantic.
Answer:
(b) Beagle

Question 2.
Name the theory which tell about the milky way and formation of star.
Answer:
Big Bang.

Question 3.
Releasing of 02 by the evolution of photosynthesis an ancient time is called?
Answer:
Oxygen revolution.

Question 4.
Which planet has the possibility of origin of life other than earth?
Answer:
ars.

Question 5.
Where did life originate ?
Answer:
In water.

Question 6.
What is the art of limitation, which is practiced the world over from annoying siblings or plant resembles another creature to gain other advantages?
Answer:
Mimicry.

Question 7.
Name the method of the changing of the structure of a gene resulting in a variant form that may be transmitted to.
Answer:
Mutation.

Question 8.
What is the collection of different genes within an inter breading population?
Answer:
Gene pool.

Question 10.
Who proposed the theory of natural selection?
Answer:
Darwin.

Question 13.
Name the theory by which earth is said to originate.
Answer:
The big bang theory.

Question 14.
What is fossil ?
Answer:
Fossils are the remains or impressions of ancient organisms preserved in sedimentary rocks or other media.

Question 15.
What is mutation ?
Answer:
New species originate due to changes of hereditary characters are called mutation.

Question 18.
In which ship Darwin studied the nature ?
Answer:
Beagle.

Question 20.
What is the scientific name of modern man ?
Answer:
Homo sapiens.

Question 21.
Who is the early man of the modern human?
Answer:
Cro-Magnon peoples are early human of modern human.

Question 24.
Which type of human was ‘Cro-Magnon’ on the basis of food in take?
Answer:
Cro-Magnon was carnivorous.

Question 25.
On the basis of evolution which human had brain size of 1400cc?
Answer:
Neanderthal.

Question 1.
What is virus ? Why is it treated as a link between living and non-living ?
Answer:
Viruses are simplest organism of the earth, which consists of nucleic acid (DNA or RNA) surrounded by protein cover. It shows characteristics of living as well as non-living organisms.
(A) Living characters of virus:

(B) Non-living characters of virus:

Due to above reason, viruses are considered as link between living and non-living organisms, thus, it is the first life originated in the earth.

Question 4.
Mention the names of discoveries and principles given by the following scientists:

Question 5.
Write down the difference between :

Answer:
1. Differences between Ozone and Oxygen :

Question 7.
What do you mean by analogous ?
Answer:
Analogous organs: Organs which are different in origin and structure but per¬forming similar functions are known as analogous organs and the phenomenon is called as analogy. Analogous organs do not indicate phylogeny.
Examples : Wings of butterflies are made up of chitin, wings of birds made by production of feathers on forelimbs and skin present between the fingers of bat are the examples of analogous organs. 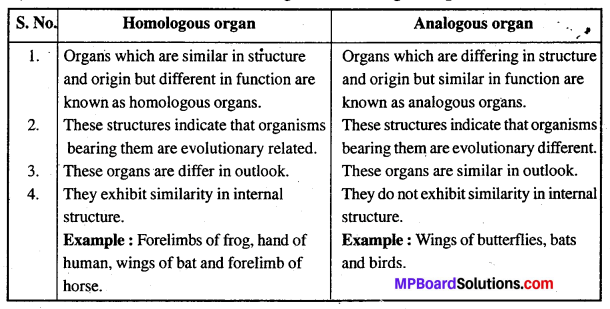 Question 13.
Explain Lamarckism in short
Or
Explain Lamarckism of organic evolution in brief.
A ns. Lamarckism : In 1809, Lamarck has proposed a theory to explain organic evolution, which is known, as the “Theory of inheritance of acquired characters.” According to Lamarck, organisms acquire certain characters during their lifetime due to changes in environment and these acquired characters are heritable. According to this theory, new species are originated as follows : 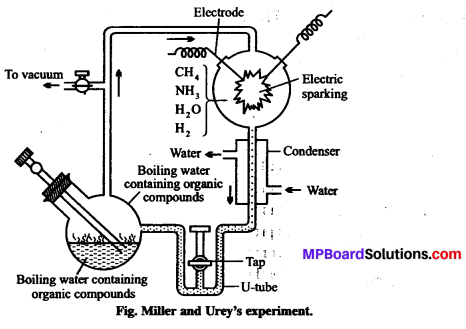 1. Formation of earth and its atmosphere: Earth is believed to be originated some 4,500 million years ago by the condensation and cooling of the clouds of cosmic dust and gases called ylem. The heavier elements collected at the core and lighter elements around the core. Outermost layer contains H, C, O and N. Oxygen was found only in combination of other elements. These four elements reacted with each other forming H2, H2O, CH4, NH3, CO2 and HCN.

2. Formation of small organic molecules : The mixture of methane, ammonia, water and hydrogen comes in contact of solar energy. Cosmic rays and electric discharge could produce some simple organic compounds. These simple organic compounds formed in such a way and accumulated in primitive atmosphere and oceans were responsible for synthesis of complex micro molecules as follows :

3. Formation of polymers : It is clearly understood from the above description that a large number of micro molecules such as hydrocarbons, amino acids, fatty acids, purine and pyrimidines and simple sugars accumulated in the oceans. When atmospheric water condensed on further cooling, the inorganic precursors collided, reacted and aggregated to form new molecules of increasing size and complexity. Thus, by polymerization macromolecules were formed. The chemical reactions for the formation of macro-molecules can be summarized as follows:

4. Formation of molecular aggregates and primitive cells : Over a vast of time, these molecules became associated with one temporary complex. Ultimately, it leads to the formation of a coacervate. A coacervate is a solution of high molecular weight of chemicals, i.e., proteins and carbohydrates, which become bounded by lipid membrane, which is selectively permeable. The coacervate grows by absorbing molecules from their environment. The substances which got accumulated in the coacervates underwent reactions and resulted in the molecular reorganization of some proteins into enzymes. A coacervate having nucleoprotein surrounded by various nutritive organic substances and covered by surface membrane is considered to be the precell, which got later transformed into first living cell. The coacervate can reproduce by budding.

5. Evolution of complex biochemical reactions : Primitive organism utilize chemi¬cal substances present in the environment as food hence, they are:

(a) Heterotrophic, chemosynthetic organisms appeared due to mutation and natural selection in heterotrophs.
(b) Blue-green algae evolved from chemosynthetic organisms by mutation and natural selection.
(c) The liberation of free oxygen into the atmosphere produced by the blue-green algae due to the process of photosynthesis. It finally changed the reducing atmosphere into an oxidizing one and therefore, all possibilities of further chemical evolution were finished.
Free living eukaryotes originated in the ocean from blue-green algae.

6. The origin of well-developed organisms : From the simple eukaryotes which were like unicellular organisms of today various forms of life evolved during passage of time.

Question 3.
Write the process of formation of organic molecules in sea water on earth with the help of Miller and Urey’s experiment
Answer:
The work of A.I. Oparin (1938-1965), HLUrey and Stanley Miller (1959) pro¬vided evidences in the favour of biochemical origin of life. They had prepared the atmos¬phere like that of primitive earth and as described by Oparin, they made the synthesis of organic compounds by the following methods:

(ii) From these four elements following organic molecules were formed in sea water of earth:
(a)

The main points of Darwinism are given below:

1. Over production of offsprings : Every living being has an inherent tendency to produce more offspring than that can survive.

3. Survival of the fittest: Darwin believed that any individual is successful in struggle for existence if it survives long enough to produces offsprings. Individuals who are fit in a particular environment can only survive.

4. Variation: Due to constant struggle, the organisms change themselves in accordance with the new needs.

5. Natural selection : In the struggle, for existence organisms having variations favourable to the environment would have more chance to survive and reproduce their own kind. Those which do not possess favourable variations would die or fail to reproduce.

6. Origin of species : Any changes in environmental conditions cause natural selection to act upon the population and select the well adapted individuals. It results in changes of characters of the populations. By the inheritance of these changes in successive generations, new species are formed.

Question 6.
Organic Evolution is a continued process, explain it in favour of it giving any three evidences.
Answer: 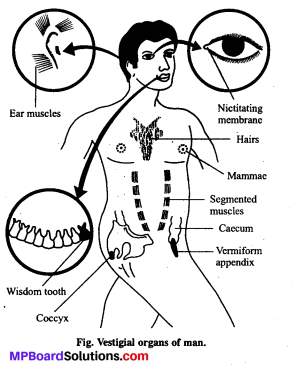 Evolution is a complex phenomenon accounting for the present day diversity among organisms. But it has clearly maintained the basic unity among them since it occurred over a period of millions of years, no one would have seen/recorded evolution and hence scientists have provided various evidences to prove evolution.

Some of the evidences of organic evolution are described below :

I. Evidences from Embryology :

II. Evidence from Anatomy: Anatomy of living organisms will be explained with different examples:

Morphological evidence of evolution is provided by the presence of vestigial organs of body which are often undesired, degenerated and non-functional. These might have been large and functional in some other animals or in ancestors of those which now possess it in rudimentary forms. e.g„ vermiform appendix in man, muscles of external ear (pinna) in man, nictitating membrane or plica, semilunaris in human eye, wisdom teeth (third pair of molars) tail bone (coccyx) in man, wings of ostrich, hindlimbs in snakes, etc.

Hence, forth fossils produce bonafide record of such plants and animals which had shown their existence once upon a time and now are extinct or not present exactly in the same form, thus, producing strong evidence in favour of organic evolution.