Question 1.
Can you list 10 recombinant proteins which are used in medical practice? Find out where they are used as therapeutics (use the internet).
Answer:

Question 3.
From what you have learnt, can you tell whether enzymes are bigger or DNA is bigger in molecular size ? How did you know ?
Answer:
DNA is bigger in molecular size than enzymes. Because DNA is a long double stranded molecule which can go up to a few meters in length when stretched end to end but enzymes although variable in size, would still be smaller than the DNA.

Question 4.
What would be the molar concentration of human DNA in a human cell? Consult your teacher.
Answer:
The average molecular weight of a nucleotide in human DNA is 130.86. The molecular weight of human DNA will therefore be 6 x 109 nucleotides (based on the human genome project) x 130-86 = 784-56 x 109 gm/mol. The molar concentration of DNA can be calculated accordingly.
The molarity can be calculated as
Molar Concentration = \(\frac { No. of molecules }{ Molecular Weight }\)

Besides better aeration and mixing properties, bioreactors have the following advantages: 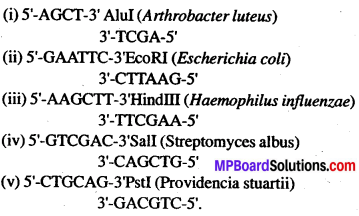 Question 9.
Can you think and answer how a reporter enzyme can be used to monitor transformation of host cells by foreign DNA in addition to a selectable marker?
Answer:
Reporter enzyme can differentiate recombinants from non-recombinants on the basis of their ability to produce a specific colour in the presence of a chromogenic substrate. DNA is inserted within the coding sequence of the enzyme β-galactosidase. This result into inactivation of the enzyme which is referred to as insertional inactivation.

The presence of a chromogenic substrate gives blue-coloured colonies if the plasmid in the bacteria does not have an insert The presence of the insert results in insertional inactivation of β-galactosidase and the colonies do not produce any colour. These are identified as recombinant colonies.

This sequence also controls the copy number of the linked DNA.
So, if we want to recover many copies of the target DNA it should be linked to the ‘ori’ site and should be cloned in a vector whose origin supports high copy number.

Question 11.
Explain briefly
(a) PCR
(b) Restriction enzymes and DNA
(c) Chitinase.
Answer:
(a) PCR : PCR stands for polymerase chain reaction; a method of amplifying fragments of DNA. This method can make multiple copies of even asingle DNA fragment or the gene of interest, in a test tube. The reaction mixture requires.

Unwinding of two strands of DNA by heating the sample at 92-94°C helps primers to get positioned on the exposed nucleotides as per base pairing rules. DNA polymerase recognizes primes as ‘start’ tags and begins to extend the primes using the free nucleotides provided in the reaction and the genomic DNA as template. With each round of reactions, the DNA doubles.

(b) Restriction enzymes and DNA : These enzymes are used in genetic engineering to cut the large DNA molecule into smaller fragments.

When DNA from two different sources are cut by the same restriction enzyme, the resultant DNA fragments have the same kind of ‘sticky-ends’ and these can be joined together (end-to end) using DNA ligases.

This new DNA created by joining fragments, from two different sources/genomes together is recombinant DNA.

(c) Chitinase : Chitinase is an enzyme that breaks down chitin, a component of fungal cell wall. It is useful for isolating the fungal cell DNA.

(b) Distinguish between DNA and RNA : 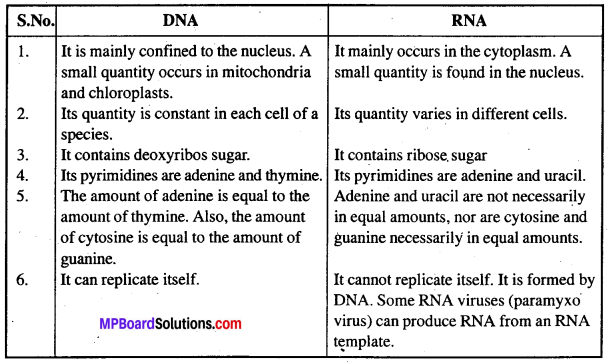 Biotechnology : Principles And Processes Other Important Questions and Answers

Question 1.
Exchange between genetic material in artificial is called:
(a) Gene recombination
(b) Gene transfer
(c) (a) and (b)
(d) None of these.
Answer:
(c) (a) and (b)

Question 6.
An organism, produced a sexually from one ancestor are called:
(a) Callus
(b) Ovum
(c) Clone
(d) None of these.
Answer:
(c) Clone

Question 8.
Transgenic expression of transgene in target tissue is determined by :
(a) Enhancer
(b) Reporter
(c) Promoter
(d) Transgene.
Answer:
(b) Reporter

Question 11.
DNA segment (T-DNA) of Agrobacterium tumefaciens is caused the disease in plant cells:
(a) Cancer
(b) Decomposition
(c) Turner
(d) None of these.
Answer:
(c) Turner

4. Answer in One Word/Sentence :

Question. 9.
What is the funtions of sticky ends ?
Answer:
It helps enzyme DNA ligase.

Question. 12.
What is electrophoresis ?
Answer:
Electrophoresis is a techniQuestionue used in laboratories in order to separate micromolecules based on size.

Question. 13.
Give the function Of circular DNA which is found in bacterial cell.
Answer:
It is works as a vector.

Question. 14.
Name the technique in which we should be isolate DNA segment.
Answer:
Electrophoresis.

Question. 1.
What is genetic engineering ?
Answer:
It is the process of attaining the DNA in a organism’s genome. Genetic engineering is used by scientists to enhance the characterstics of an individual organism.

Question. 2.
Give any two purpose of genetic engineering.
Answer:

Question. 3.
What is bacteriophage ?
Answer:
Bacteriophages are composed of proteins that encapsulate a DNA genome and may have relatively simple structure.

Question. 4.
What is restriction endonuclease ?
Answer:
An enzyme produced chiefly by certain bacteria, that has the property of cleaving DNA molecules at or near a specific sequence of basis.

Question. 5.
What is vector ?
Answer:
A vector is a quantity or phenomenon that has two independent properties. It used to transfer gentic material to a target cell.

Question. 7.
What is plasmid ?
Answer:
A plasmid is a small DNA molecule within a cell that is physically separated from a chromosomal DNA and can replicate independently.

Question. 8.
What is DNA ligase ?
Answer:
DNA ligase is a specific type of enzyme, a ligase that facilitates the joining of DNA strands togather by catalyzing the formation of a phosphodiesterbond.

Question. 9.
What is C-DNA?
Answer:
C-DNA is a single stranded RNA. C-DNA is often used to clone eukaryotic genes in prokaryotes.

Question. 10.
What is Ti-plasmid ?
Answer:
Ti or tumour inducing plasmid is a plasmid that is a part of the genetic equipment that Agrobacterium tumifaciens use to transduce their genetic material to plants.

Question. 11.
Name of the first clone of the world.
Answer:
Dolly was a female domestic sheep and the first mammal cloned.

Question. 12.
Name the scientist who discovered artificial DNA synthesizing method.
Answer:
The Nobel prize in physiology 1968 was awarded jointly to Robert W. Holley, Hargobind Khorana and M. Nirenberg for their interpretation of the genetic code.

Question. 13.
What is gene manipulation or genetic engineering ? Explain it.
Answer:
Genetic engineering, also called genetic modification is the direct manipulation of an organisms genes using biotechnology. It is a set of technologies used to change the genetic makeup of cells, including the transfer of genes and across species boundaries to produce improved organisms. New DNA is obtained by either isolating and copying the genetic material of interest using recombinant DNA methods or by artificially synthesising the DNA.

Significance : Genes stored in gene bank are used for the production of improved varieties of species and for scientific tests.

Question. 18.
What do you understand by gene cloning ? What are its significance?
Or
What is gene cloning ? Write its importance.
Answer:
Gene cloning : It is a process in which DNA of an organism is cut into smaller DNA fragments by the use of restriction endonuclease enzymes. Each DNA fragment is introduced into a bacterial, yeast, insect, plant or animal cell. The cells are grown on a suitable medium under suitable conditions. Each ceil containing a particular DNA fragment multiplies to give rise a group of cells, all containing the same foreign DNA.

These groups of cells are known as clone of cells. These copies of DNA resulting from the multiplication or recombinant DNA are called as cloned DNA and the process is known as gene cloning.
Significance:

2. Treatment of diseases : A new system of medicines, gene therapy may develop to cure several genetic disorders such as haemophilia, colour-blindness, etc. Also many inborn metabolic disorders due to defective genes such as alkaptonuria, phenylketonuria, etc. can be cured.

3. Use in agriculture : The genes for N2 fixation found in symbiotic bacteria Rhizobium leguminosarum or blue-green algae may be transferred to the major food crops, increases food production without using expensive fertilizers. Thus, we can save millions of rupees spent otherwise on fertilizers and manures to boost food production.

4. Changes in the structure and expression of genes : We can obtain new plants, animals having traits tailored according to our will.

1. Isolation of desired gene or fun¬ctional DNA segment : From the eukaryotic cell desired DNA segment is isolated with the help of enzyme restriction endo¬nuclease. Now this segment of DNA is known as foreign DNA.

2. Transfer of DNA segment from one organism to other : Plasmid is an extra chromosomal circular DNA found mostly in bacteria over and above the main genome. When bacteria multiplies the plasmid DNA also multiplies along with the chromosomal DNA. These plasmids can be easily isolated from the bacterial cell with the help of restriction endonu¬cleases. Plasmid serves as a vector for transferring the foreign DNA into a suitable recipient. 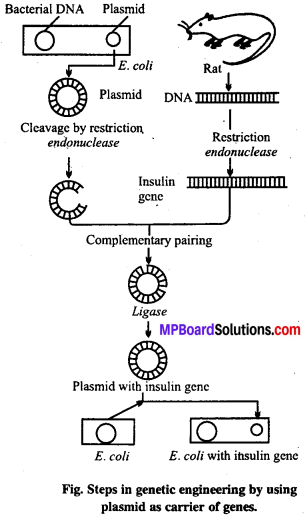 Such a recombinant DNA when introduced into a recipient bacterium (transformation), it replicates and expresses itself, within the bacterial cell, the recombinant DNA molecule replicates along with the endogenous DNA of the host cell and produces copies of cloned DNA. This process is known as gene cloning. The cloned recombinant DNA produced in large Questionuantities can be isolated, purified and analysed.

Question. 4.
What is clone ? Give its preparation, extracted and purified.
Answer:
An organism or cell or group of organisms, produced a sexually from an ancestor, to which they are genetical.

1. Preparation of gene : DNA extracted from an organism, with the gene of interest is cut into gene size pieces with restriction enzyme.

2. Insertion into vector : Bacterial plasmid are cut with the same restriction enzyme. Plasmids are small circles of DNA in bacterial cells that are naturally present in addition to the bacterial other DNA.

3. Transformation of host cells : The recombinant plasmids are then transferred into bacteria using either electrophOration. The plasmid are small enough to pass through the holes into the cells. However rather than using electricity to create holes in the bacterium, it is done by alternating the temperature between hot and cold.

The bacteria is grown on a culture dish and allowed to grow into colonies. All the colonies on all the plates are called a gene library.

2. Plant cloning : Plant tissue culture is a method of propagation that has been sprouting in popularity throught as an alternative to cloning.

Plant can be cloned artificially using tissue culture. Vegetative propagation works because the end of the cutting forms a mass of non specialized cells called a callus, the callus will grow divide and form various specialized cells eventually forming a new plant.