Question 17.
When premium amount is not received in forfeiture of shares, share premium account is:
(a) Debited
(b) Credited
(c) Not written
(d) None of these.
Answer:
(a) Debited

Question 5.
Write the answer in one word / sentence:

Question 2.
What is share ?
Answer:
The capital of a company can be divided into different units with different value, which are known as shares. They are the part of total capital.

Question 5.
What do you understand by the term ‘Sweet share’ ?
Answer:
Those shares which are issued by the company to its employees and officers at a discounted rate to encourage them to work devotion ally for the betterment of the company are called ‘sweet shares’. Such shares cannot be sold by the holders for at least one year.

Question 9.
What do you mean by call in arrear ?
Answer:
The amount which is due on shareholders and which is called up by the company but shareholders could not paid till the fixed date (due date) then, such amount is called calls in Arrear.

Question 10.
What do you mean by authorised capital ?
Answer:
Authorised capital refers, to that capital which is stated in the memorandum of association. This is the maximum amount of capital which the company will have during its lifetime unless it is increased. It must be distinctly shown in the balance sheet of the company under the head ‘Share Capital’. It is also known as nominal capital or registered capital.

Question 14.
What is prorata Allotment ?
Answer:
Prorata allotment:
In case of over subscription of shares, the directors allot small number of shares to the applicants. In other words, the directors accept the applications partially. In such cases the excess of application money is utilized against the amount due to allotment and future calls by the transferring the excess amount from the share application account. Thus, when the company allots shares proportionately or rationally to all the applicants, it is known as prorata allotment.

Question 15.
What is dividend ?
Answer:
When the company distributes a part of its profit on a certain rate to its share-holder, it is called dividend. The rate of dividend is fixed for preference shareholders while this facility is not available for equity shareholders. They get their dividend when the company make profit.

Question 18.
What do you mean by issue of shares at premium ?
Answer:
When the shares are issued at a price higher than its face value, it is called issue at premium. From the issued price, the face value of the share is subtracted and the difference excess amount is the premium.

Question 21.
What do you mean by reissue of forfeiture shares ?
Answer:
When the company reissues the forfeited shares it is known as ‘Reissue of for-feited shares.’ It can be done at par, at premium or at a discount.

Question 22.
What do you understand by surrender of shares ?
Answer:
When the shareholder voluntarily wants to gaining up the rights of being a share-holder and surrenders all his shares (Share certificates) to the company, then it is known as surrender of shares. The accounting of such surrender is alike forfeiture of shares.

Question 23.
What is ‘Reserve Capital’ ?
Answer:
That part of issued capital which is called from the shareholders on the event of dissolution of the company is called Reserve capital. This capital cannot be issued for issuing Bonus shares or writing off capital losses.

Question 24.
What is ‘Capital Reserve’ ?
Answer:
A Reserve fund created out of capital profit other than normal profit of the business is called capital reserve. It is displayed on the liabilities side of company’s Balance sheet. This fund can be utilized for issuing Bonus shares and writing off capital losses of the company.

Question 25.
Is there any provision of cancellation of forfeiture order ?
Answer:
The Articles of Association provides the Board of Directors, the right to forfeiture the shares of defaulting shareholders. The same article also provides the right to Board of Directors for cancellation of forfeiture order only if the defaulting shareholder pay all his previous dues along with interest and any penalty imposed on him.

Question 4.
Explain any three types of preference shares. (CG 2005 Set A, Supple 13)
Answer:
1.  Cumulative preference shares:
If on such shares in any year dividend is not paid due to less profit, as such in the next year the unpaid arrears of dividend shall be paid before making payment to the holders of any other class of shares.

2. Non – cumulative preference shares:
On these shares, the dividend is paid at a fixed percentage but the arrears of dividend, the dividend shall not accumulate in the coming years.

Question 8.
What is calls in advance ?
Answer:
Sometimes the share amount is paid in advance before the call money becomes due, such type of advance is called call paid in advance. Articles ‘A’ of companies act gives permission regarding it, according to this articles interest will be allowed @ 6% p.a.

Question 9.
What is over-subscription ?
Or
What do you understand by over-subscription ?
Answer:
A company according to its own requirement issues shares. Sometimes company receives applications for a large number of shares than offered by it for subscription. In such case, the work of allotment of shares by directors becomes difficult because all the applicants cannot be allotted on the basis of their applications. In this case, the directors will allot only those shares which are issued by the company. Hence, allotment will be made on the basis of terms decided in the meeting of directors.

2. Issued capital:
It is the part of the authorised capital, that the company offered to the public for subscription.

4. Called – up capital:
The company doesn’t require the full value of the shares they subscribed for at one instalment. Thus, the portion of the subscribed capital, which the share¬holders are called to pay is known as ‘Called-up Capital’.

5. Uncalled capital:
That part of the capital which is not called by the company from the shareholders is known as ‘Uncalled Capital’.

6. Paid – up capital:
It is that part of called-up capital, which is actually paid by the shareholders, is called ‘Paid-up capital’.

7. Reserve capital:
Sometimes, a company by means of a special resolution, decides that its uncalled capital will not be called-up; during its existence and that would be avail-able as an additional security to its creditors in the event of its liquidation. This capital is termed to be reserve capital.

Question 14.
Discuss the procedure of issue of shares.
Answer:
Following steps are taken by a public company for the issue of shares:
1. Issue of prospectus:
The company issues a prospectus by which it invites public to subscribe to its shares. The prospectus describes the profitability and soundness of the business of the company to attract the investing public. 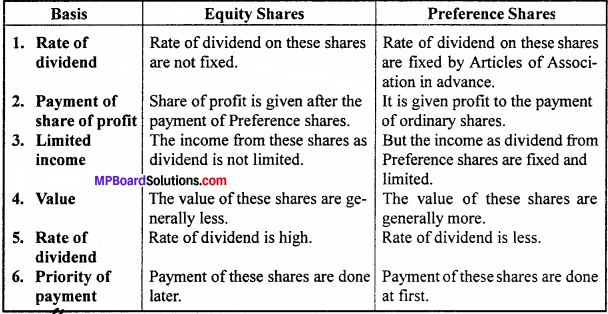 The following conditions must be satisfied for the forfeiture of shares:

1. Preparation of list: Firstly a list of defaulting shareholders is produced by the company secretary in the meeting of the board of directors.

3. Issued reminder: After the issue of above notice if shareholders unable to pay the call money then the board of directors orders again to serve final notice for payment.

Question 20.
Describe the effects of forfeiture of shares.
Answer:
Rights and duties of defaulter shareholder w hen share is forfeited will be affected in the following way:

(1) Reissue of Forfeited Shares at Par:

(2) Reissue of Forfeited shares at Discount:

(3) Reissue of Forfeited Shares at Premium:

(4) When the balance of Forfeited Shares A/c is transferred to Capital Reserve: