In this article, we will share MP Board Class 8th Social Science Solutions Chapter 16 South America-Economic Features Pdf, These solutions are solved subject experts from the latest edition books.

Mp Board Class 8 Social Science Chapter 16 Question 2.
Balparizo harbor is
(a) In Chile
(b) In Brazil
(c) In Surinam
(d) In Peru
Answer:
(a) In Chile

In South America Hindi Is Spoken In Mp Board Class 8th Question 1.
What are cash crops? Write with examples?
Answer:
Cash Crops:
Besides food grain, such grains which provide cash income are called cash crops. These are also called trade crops.
For example:
Coffee, Sugarcane, Coco and Banana. Besides these cotton, tobacco, rubber, fruits and potato are other cash crops.

Mp Board Class 8 Science Solution Chapter 16 Question 3.
What is the utility of Car nova tree in South America?
Answer:
The wax is derived from the date tree of Car nova specie in Brazil which is used in shoe polish, furniture polish and in candle making.

Class 8 Social Science Chapter 16 Question Answer Mp Board Question 1.
Write the specialty of fishery in South America?
Answer:
The South American continent having coasts all around have immense deposits of fishes. Fishes are found in big quantity on the coasts of Pacific Ocean in the west. Fishing is a developed industry in Peru.

Peru is the leading and big fish producing country in the world. The one fifty production of fish of the world is met from South America continent. Having no consumption of so much fishes here, these are exported to foreign countries. Besides sea coasts, fishes are also caught from rivers also.

Mp Board Class 8 Social Science Solution Question 2.
Mention about two major crops in South America?
Answer:
Wheat and Maize are the important cereals of the South America. Wheat is produced in the temperate climate. Argentina and Chile are the major wheat producers. Maize is produced in hot climate and areas that get sufficient rains.

Brazil and Argentina are the major maize producers. The maize is the basically South American crop which later on reached in other countries of the world. Brazil has third place in the world in maize production and Argentina stands fourth.

Mp Board Class 8 Social Science Solution Chapter 15 Question 3.
What are the specialties of the South American population?
Answer:
Total population of the continent is 37 crore, 18 lakh. Half of population live in Brazil. The average density is 21 persons per square Km. The dense populated areas in the coastal regions, most people live in villages.

The rich are less than poor labor class. There are people of American, Indian, Black and European species in the continent. The mix species made of these species also more. The Mastigo species made of Indians and Europeans are in large number. Others are Mulatto’s and Zambos.

Question 1.
Describe the forest and forest industry of South America?
Answer:
The Amazon Basin has tropical forest of hard woods. Several kinds of woods are found at one place in these forests, labor and time both are needed and carrying of woods costs more expenses. Wax from Car nova species in Brazil which is used for shoe polish, furniture polish and in candle making.

From the bark of Sinkona tree Quinine is made. Chewing Gum is mode from Chikil tree. The Amazon Basin is producer of rubber tree.

The central Chile’s Mediterranean evergreen forests have trees of Oak, Wall nut, Chestnut, Fig and there are light wood forest which are used in furniture making. Pine and Birch trees are found in South Chile.

Question 2.
Describe the major minerals of South America?
Answer:
South America has different sorts of minerals deposits. Huge raw iron deposits are in Brazil and iron is produced in Chile, Peru and Venezuela.

Chile is the biggest producer and exporting country of copper in the world. Argentina, Brazil, Ecuador, Peru and Venezuela also produce Copper. Brazil is the fourth largest Bauxite producer in the world.

Besides above minerals Lead, Zinc, Emerald, Uranium and Platinum are also produced.

Question 3.
Mention about cash crops in South America with the names of producing countries?
Answer:
Cash crops of South America are Coffee, Sugarcane, coco, banana,cotton, tobacco, rubber, fruits and potato. Brazil is called the coffee pot of the world for its largest production. 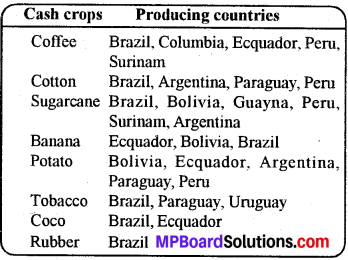 Question 4.
Write about the causes of less growth of transport and trade in South America?
Answer:
There is very little roads and railway lines in Andes Mountain range due to large tropical forests and high mountains. Same situation is in plateau and grassland regions. Having no land transports there is no growth of big industries.

The big and developed country Brazil has road and rail facilities only in eastern side and so there are big industries. Argentina has long rail routes. The other countries too have no transport facilities in this continent.

The trade has not developed due to the lack of transport. The coastal areas being the longest waterways are the important sources of trade. Barring Bolivia and Paraguay almost all the countries have useful ports.

Show the following on the outline map of South America- 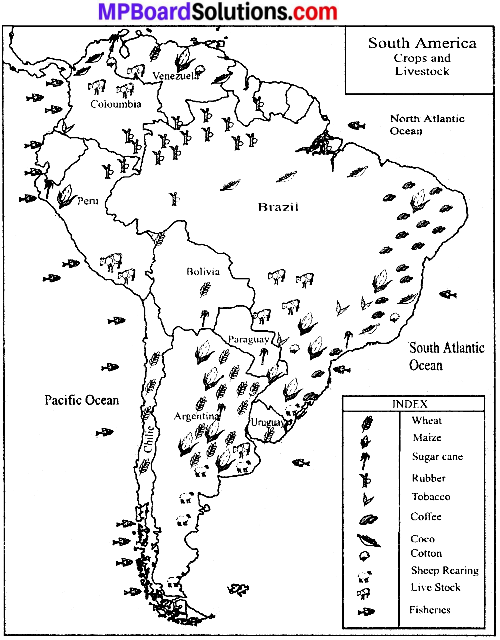