In this article, we will share MP Board Class 8th Social Science Solutions Chapter 13 North America-Geographical Features Pdf, These solutions are solved subject experts from the latest edition books.

Choose the correct option of the following

Class 8 History Chapter 13 Mp Board Question 3.
Write the three characteristics of Mediterranean vegetation?
Answer:
The Western Central areas have Mediterranean vegetation. Here trees of Oaks, Cheer, Olive, Redwood, Cork and juicy fruits grow in larger number. The valley of California is famous for fruits production. The bark of trees and leaves are thick, soft and wide fine trees are thorny which protects trees from dying

Mention The Water Borders Of India Class 8 Mp Board Question 4.
What is the difference be Cordilleras and Canyon?
Answer:

Class 8 Science Chapter 13 Mp Board Question 1.
Write the names of North America’s physical features and define in brief?
Answer:
Major Physical Divisions of North America:
North America may be divided into three major physical divisions. They are Western Cordilleras the Eastern Highlands and the Central Lowlands.

Question 2.
Mention about the Coniferous forest and wildlife?
Answer:
In the south of Tundra, the wide stretch of last to west experiences very cold winter and the summer is normal. In this entire area the coniferous forest belts are found these forests contain trees of Chir, Larche, Spruce and Fir. The woods of these forests are very soft and they are used as pulp for paper and furniture. These forests have wild life like bear, polar bear, fox, wolfs, rabbits and stags.

2. Surface diversities:
In the West cordillera holds the Western winds and brings excess rain while the east slope gets very less rain due to rain shadow area. That is why the plains of Prahie receive very less rain but as we move from the plains of Praries to east, southeast plateaus and mountains, the rains increase gradually. In the north of the continent it rains in the form of snowfall and it is less because this area is low-lying area. .

3. Permanent winds:
In the west Cordilleras and high lands in the east, both extending from North to South have very vast plain. The polar winds from north in winter and the hot summer winds from south affects the vast plains. Therefore, it is cold in winter and hot in the summer. The southern and the southeastern coasts of the continent come in the region of the trade winds and the north-western coast falls in the region of the westerlies.

These parts therefore receive heavy rains. The westerlies start blowing over Western California. This brings winter rains to California. The Monsoon winds affect the Mexican region. Therefore, it receives rains in the summer. Due to trade winds the Gulf of Mexico and south-eastern Coastal area receive the rains throughout the year.

4. Effect of Currents:
The hot and cold currents flowing near coasts affect the climate mostly. The Gulf Stream flows along the south-eastern coast of the continent and the Alaska current flows along the north western coast. The cold Labrador current passes by the northeastern part and the California current flows along the south-western part. So the climate is very cold. Near New Found land the cold and hot currents meet and this causes dense fig. So it is very helpful for fishing. This area is known as fishing banks.

Project Work
Show the following in the map of North America. 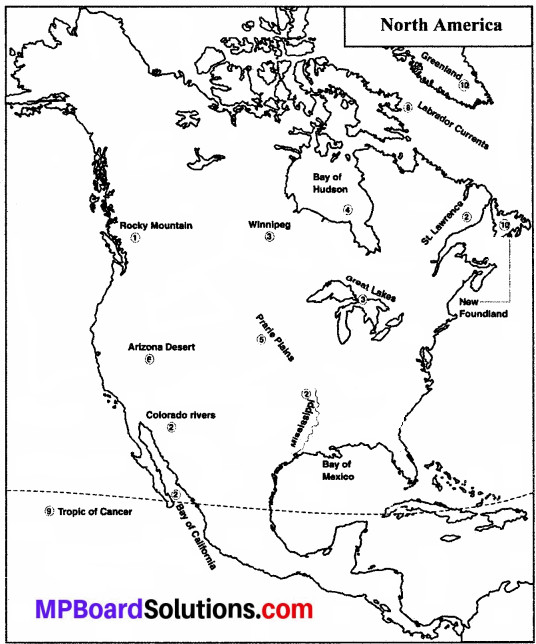