In this article, we will share MP Board Class 8th Science Solutions Chapter 9 Reproduction in Animals Pdf, These solutions are solved subject experts from the latest edition books.

Mp Board Class 8 Science Chapter 9 Question 1.
Explain the importance of reproduction in organisms.
Answer:
The production of new individuals from their parents cells is known as reproduction. Reproduction is very important as it ensures the continuation of similar kinds of individuals, generation after generation. If reproduction process does not exist, the generation of living beings will be vanished from the earth.

Mp Board Class 8 Science Solution Chapter 9 Question 2.
Describe the process of fertilization in human beings.
Answer:
In human beings, sexual reproduction occurs which is reproduction results from the fusion of male and female gametes. The male reproductive organs are a pair of testis, sperm ducts and penis. The testis produces the male gametes called sperms. Millions of sperms are produced by the testis. Though the sperms are very small in size, each has a head, a middle piece and a tail. Each sperm is a single cell with all the usual cell components.

The female reproductive organs are a pair of ovaries, oviducts and the uterus. Ovary produces female gametes called ova (eggs). In human beings, a single matured egg is released into the oviduct by one of the ovaries every month. Uterus is the part where development of the; baby takes place. Like sperm, an egg is also a single cell.

The first step in the process of reproduction is the fusion of a sperm and an ovum. Millions of sperms from the male are transferred into the female body. The sperms swim in the oviduct with the help of their tails to reach the egg. When they come in contact with the egg, one of the sperms may fuse with the egg. 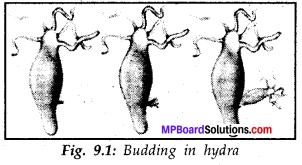 (ii) Binary fission: Amoeba is a single celled animal. It begins reproduction by the division of its nucleus into two nuclei. Thus, two amoeba are formed from one amoeba. Since an animal reproduces by division into two individuals, this type of asexual reproduction is called binary fission. 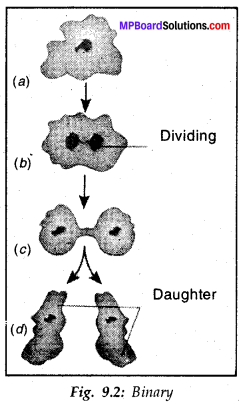 Class 8 Science Chapter 9 Question Answer Question 7.
In which female reproductive organ does the embryo get embedded?
Answer:
The embedding of the embryo takes place in the wall of the uterus of the female for further development.

Mp Board Class 8 Social Science Chapter 9 Question 8.
What is metamorphosis? Give examples.
Answer:
Metamorphosis. It is the drastic change which takes place during the development of an animal into an adult. Frogs and silkworms exhibit metamorphism.
Egg of frog → Tadpole larva → Adult
Tadpoles look different from the adult. But they soon transform into an adult capable of jumping and swimming. Similarly, caterpillar or the pupa of silkworm looks quite different from adult. Also beautiful moth emerges out of the cocoon.

Class 8 Science Chapter 9 Question 10.
Complete the cross-word puzzle using’ the hints given below:
Across
1. The process of the fusion of the gametes.
6. The type of fertilization in hen.
7. The term used for bulges observed on the sides of the body of Hydra.
8. Eggs are produced here.

Down
2. Sperms are produced in these male reproductive organs.
3. Another term for the fertilized egg.
4. These animals lay eggs.
5. A type of fission in amoeba.

Reproduction In Animals Class 8 Questions And Answers Question 2.
Observe live hydra yourself and learn how they reproduce by doing the following activity:
During the summer months collect water weeds from ponds or ditches along with the pond water and put them in a glass jar. After a day or so you may see several hydra clinging to the sides of the jar. Hydra is transparent, jelly-like and with tentacles. It clings to the jar with the base of its body. If the jar is shaken, the hydra will contract instantly into a small blob, at the same time drawing its tentacles in. Now take out few hydras from the jar and put them on a watch glass. Using a hand lens or a binocular or dissection microscope, observe the changes that are taking place in their body. Note down your observations.
Answer:
Do yourself.

Class 8 Science Chapter 9 Solution Question 3.
The eggs we get from the market are generally the unfertilized ones. In case you wish to observe a developing chick embryo, get a fertilized egg from the poultry or hatchery which has been incubated for 36 hours or more. You may then be able to see a white disc-like structure on the yolk. This is the developing embryo. Sometimes if the heart and blood vessels have developed you may even see a red spot.
Answer:
Do yourself.

Chapter 9 Reproduction In Animals Question 4.
Talk to a doctor. Find out how twinning occurs. Look for any twins in your neighbourhood, or among your friends. Find out if the twins are identical or non-identical. Also find out why identical twins are always of the same sex? If you know of any story about twins, write it in your own words.
Answer:
Do yourself.

Ch 9 Science Class 8 Activity 9.1
Visit some ponds or soil-flowing streams during spring or rainy season. Look out for clusters of frog’s eggs floating in water. Write down the colour and size of the eggs.
Answer:
The colour of the eggs is dull white and size is less than a centimetre to a few centimetres.

Reproduction In Animals Questions And Answers Activity 9.2
Try to collect eggs of the following organism-frog, lizard, butterfly or moth, hen and crow or any other bird. Were you able to collect eggs of all of them? Make drawings of the eggs that you have collected.
Answer:
Yes, I collected all of these eggs.

Class 8 Chapter 9 Solution Science Question 2.
What is reproduction? What’s the need for this process?
Answer:

Chapter 9 Reproduction In Animal Question 3.
What is fertilization?
Answer:
The process of fusion of male and female gamete in sexual reproduction is called fertilization.

Question 7.
Explain the reproductory organs of female in human beings.
Answer:
In human beings the female reproductory organs are a pair of ovaries, oviducts or fallopian tubes and the uterus. Ovaries are responsible to produce female gamete called ova, which fertilize with male sperm in female fallopian tube and travels to uterus for its development into embryo and the foetus.
Exercise for Practice

Question 8.
Explain the process of fertilization.
Answer:
Sperm is a tiny cell and is quite active for its movement, a thread like structure, the flagellum is found which is called as the tail. Ovum, the female gamete is a large, spherical cell which remains static. When the male and female gamete fuse; a new cell called zygote is formed. This process of fusion is known as fertilization. This zygote undergoes many changes and forms a new individual.