Question 1.
Give two examples each of situations in which you push or pull to change the state of motion of objects.
Answer:
Examples of Pull:

Question 4.
An archer stretches her bow while taking aim at the target. She then releases the arrow, which begins to move towards the target. Based on this information fill up the gaps in the following statements using the following terms:
muscular, contact, non-contact, gravity, friction, shape, attraction.
(a) To stretch the bow, the archer applies a force that causes a change in its ……………
(b) The force applied by the archer to stretch the bow is an example of ……………… force.
(c) The type of force responsible for a change in the state of motion of the arrow is an example of a ………….. force.
(d) While the arrow moves towards its target, the forces acting on it are due to ………….. and that due to …………… of air.
Answer:
(a) shape
(b) muscular
(c) contact
(d) gravity, friction.

Question 5.
In the following situations identify the agent exerting the force and the object on which it acts. State the effect of the force in each case.
(a) Squeezing a piece of lemon between the fingers to extract its juice.
(b) Taking out paste from a toothpaste tube.
(c) A load suspended from a spring while its other end is on a hood fixed to a wall.
(d) An athlete making a high jump to clear the bar at a certain height.
Answer:
(a) In this situation, the fingers are the agents exerting a force. Lemon is the object on which force acts. It involves muscular force.

(b) In this situation, the fingers are the agents exerting a force. Toothpaste is the object on which force acts. It involves muscular force.

(c) In this situation, the load is the agent exerting force. Spring is the object on which force acts. It involves gravitational force.

(d) In this situation, the athlete is the agent exercising force, bar is the object to be cleared. It involves a non-contact gravitational force.

Question 7.
An inflated balloon was pressed against a wall after it has been rubbed with a piece of synthetic cloth. It was found that the balloon sticks to the wall. What force might be responsible for the attraction between the balloon and the wall?
Answer:
This is an electrostatic force.

Question 9.
A rocket has been fired upwards to launch a satellite in its orbit. Name the two forces acting on the rocket immediately after leaving the launching pad.
Answer:
Gravitational force and frictional force.

Question 1.
Make a 50 cm x 50 cm bed of dry sand about 10 cm in thickness. Make sure that its top surface is levelled. Take a wooden or a plastic stool. Cut two strips of graph paper each with a width of 1 cm. Paste them vertically on any leg of the stool – one at the bottom and the other from the top. Now gently put the stool on the sand bed with its legs resting on the sand. Increase the size of sand bed if required. Now put a load, say a school bag full of books, on the seat of the stool. Mark the level of sand on the graph strip. This would give you the depth, if any, to which the legs of stool sink in sand. Next, turn the stool upside down so that now it rests on its seat on the sand bed. Note the depth to which the stool sinks not. Next, put the same load on the stool and note the depth to which it sinks in the sand. Compare the pressure exerted by the stool in the two situations.
Answer:
Do yourself. 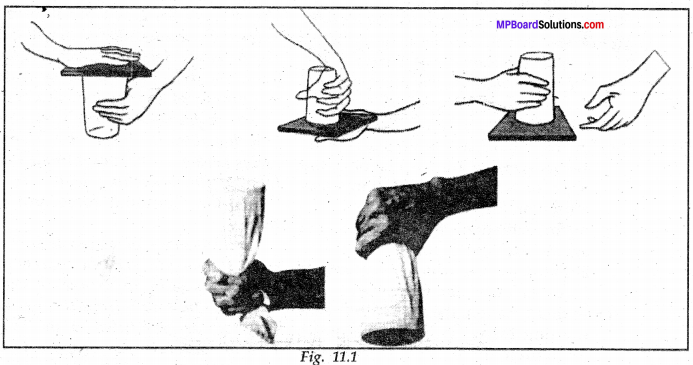 Question 3.
Take 4-5 plastic bottles of different shapes and sizes. Join them together with small pieces of glass or rubber tube as shown in Fig. 11.2. Keep this arrangement on a level surface. Now pour over in any one of the bottles. Note whether The bottle in which water is poured gets filled first or all the bottles get filled up simultaneously. Note the level of water in all the bottles from time to time. Try to explain your observations.
Answer:
Do yourself.

Activity 11.1.
The table given below gives some examples of familiar situations involving motion of objects. You can add more such situations or replace those given here. Try to identify action involved in each case as a push and/or a pull and record your observations. One example has been given to help you. 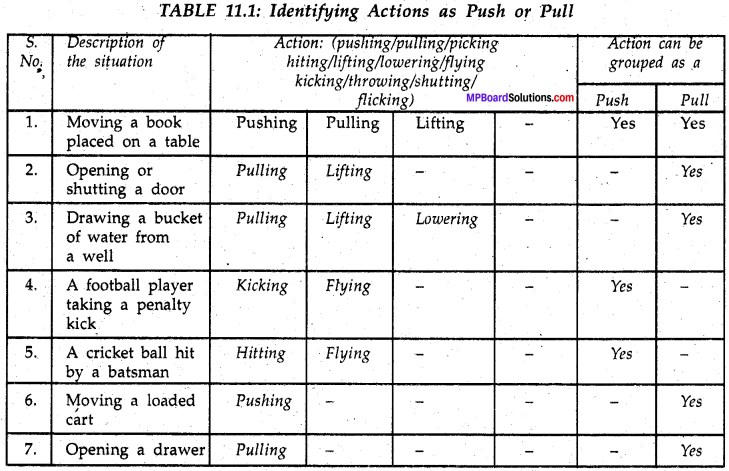 Activity 11.5
Some situations have been given in Column 1 of Table 11.2 in which objects are not free to move. Column 2 of the Table suggests the manner in which a force can be applied on each object while Column 3 shows a diagram of the action. Try to observe the effect of force in as many situations as possible, You can also add similar situations using available material from your environment. Note your observation in Columns 4 and 5 of the Table. 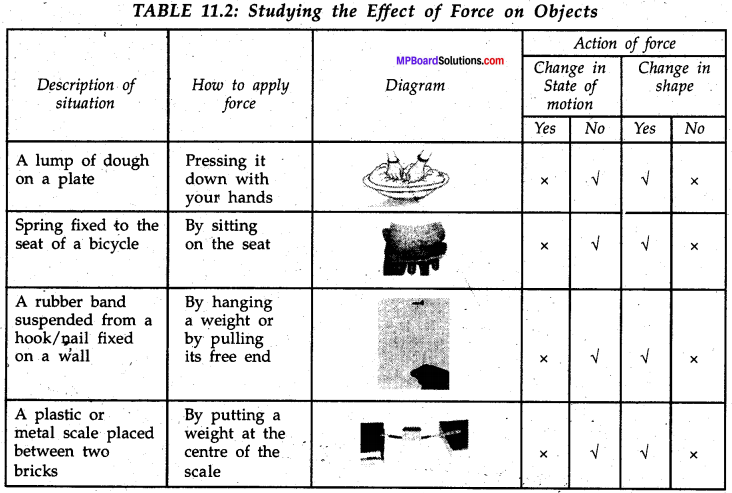 Question 1.
Define Force.
Answer:
Force is a pull or a push.

Question 4.
What can force do to bodies on which it is applied?
Answer:
The body is pushed, pulled, thrown, flicked or kicked when force is applied on it.

Question 6.
What is pressure?
Answer:
Force exerted per unit area is called pressure.

Question 7.
Is there any relation between pressure and force?
Answer:
Yes, pressure is force exerted by a unit surface, i.e.,

Question 9.
How do we feel force in our daily life?
Answer:
Many big or small actions make us feel the force. We have to push or pull many objects daily. A moving ball stops on its own, the ball changes the direction of its motion, when hits with a bat. We churn curd to make lassi and many other actions.

Question 12.
Why do astronauts wear specially made suits to go into space?
Answer:
The atmospheric pressure decreases as we go up. The pressure inside the body therefore becomes higher in comparison when the astronauts go into the space. Their suits make sure that the body cells of the astronaut do not burst under their internal pressure.