Question 1.
Which taxes were imposed on the Hindus by Aurangzeb?
Answer:
Aurangzeb imposed the Jazia tax on the Hindus.

Question 2.
Who do you know about the Satnamis?
Answer:
Satnamis were the followers of truth. They used to dress like the purohits orpriests. They revolted due to the religious oppression of Aurangzeb. Their main center was Namaul and Mewar. However Aurangzeb suppressed their revolts ruthlessly.

Question 1.
Describe the causes of the decline of the Mughal Empire.
Answer:
After the death of Aurangzeb in 1707, the Mughal Empire broke up. Its fall had already begun during Aurangzeb’s reign. But during the eighteenth century the fall was nearly complete.

The factors that led to the down-break of the Mughal empire were as follows:
1. Weak and incapable successors:
The successors of Aurangzeb were very weak and incapable. They had no capacity to rule over such a vast empire. They remained puppets in the hands of their subedars and other officers.

2. Wars of succession:
After the death of Aurangzeb war of succession broke out. They reduced the strength of the Kingdom.

3. The Suspicious nature of Aurangzeb and his rigid religious policy:
Aurabgzeb’s nature was very suspicious. Due this nature he could not provide administrative and military training to his sons. As a result they became incapable of managing the empire. His religious policy was based on intolerance. This made the Sikhs, Jats, Satnamis, Rajputs and Marathas his great enemies. They revolted against him.

4. Aurangzeb’s Deccan Policy:
Aurangzeb spent the last 25 years of his life fighting battles in the south. This made the Mughal administration in the north very weak.

6. Foreign invasion:
Nadirshah, the ruler of Iran invaded the Mughal Empire in 1739. He looted the wealth about seventy crores of rupees. After his assassination in 1747 AD his general Ahmadshah Abdali, became the ruler and fought third battle of Panipat with Maratha in which Maratha were defeated. Because of these invasions Mughal Empire became weak and remained restricted to Delhi and surrounding areas.

7. Lack of Naval Power:
Neglect of navy proved fatal for the Mughal Empire.

Project Work:
On an outline map of India mark the extent of the Mughal Empire. Also mark the areas of Bundelas, Jats and Satnamis.
Answer: 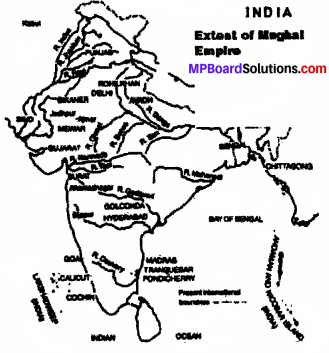