In this article, we will share MP Board Class 7th Social Science Solutions Chapter 11 The Delhi Sultanate Pdf, These solutions are solved subject experts from the latest edition books.

Class 7th History Chapter 11 MP Board Question 1.
Describe the reforms made by Alauddin Khilji?
Answer:
Alauddin Khilji made a number of reforms:

Invasion of Taimur – The invasion Of Taimur proved to be fatal blow to Delhi. He ordered mass Killing and looted Delhi.

Delhi Sultanate Time Period MP Board Project Work:
Make a list of the Sultans of Delhi and also write down their periods.
Answer: 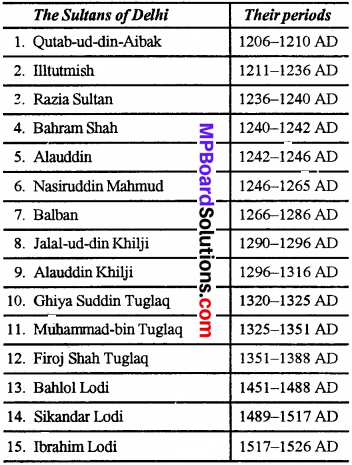