Weather Climate and Adaptations of Animals of Climate  Intext Questions

Question 1.
I wonder who prepares the wheather report?
Answer:
The weather reports are prepared by the Meteorological Department of the Government.

Question 3.
What is the source of whether in the first place?
Answer:
All changes in the weather are caused due to sun.

Question 4.
Do fishes and butterflies also migrate like birds?
Answer:
No.

Activity
Fill all the columns according to the data in the chart that you have prepared.
Answer:
Table
Weather data of a week 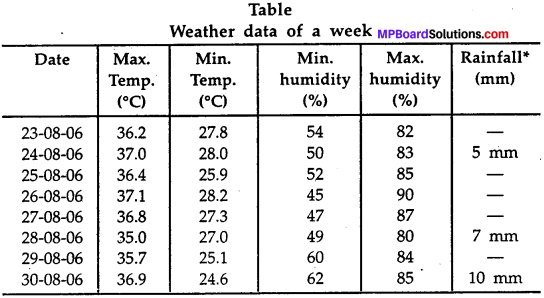 (Rainfall may not be recorded for all the days since it may not rain everyday.)

Question 1.
Name the elements that determine the weather of a place?
Answer:
The day – to – day condition of the atmosphere at a place with respect to the temperature, rainfall, humidity, wind – speed, etc., is called the weather at that place.

Question 3.
Fill in the blanks:

Question 4.
Indicate the type of climate of the following areas:

Question 5.
Which of the two changes frequently weather or climate?
Answer:
Weather.

Question 6.
Following are some of the characteristics of animals:

For each characteristic indicate whether it is adaptation for tropical rainforests or polar regions. Do you think that some of there characteristics can be adapted for both regions?
Answer:

Question 7.
The tropical rainforest has a large population of animals. Explain why it is so?
Answer:
Tropical rain are found in Western Ghats and Assam in India, South – east Asia, central America and Central Africa. Because of continuous warmth and rain, this region supports wide variety of plants and animals. The major types of animals living in the rainforests are apes, gorillas, monkeys, tigers, lions, leopards, lizards, elephants, insects, birds and snakes.

Question 8.
Explain, with examples, why we find animals of certain kind living in particular climatic conditions?
Answer:
Animals are adapted to survive in the conditions in which they live. Animals living in very cold and hot climate must possess special features to protect themselves against the extreme cold or heat. Polar bears have white fur so that they are not easily visible in the snowy white background. It protects them from their predators. It also helps them in catching their prey. To protect them from extreme cold, they have two thick layers of fur.

They also have a layer of fat under their skin. In fact, they are so well – insulated that they have to move slowly and rest often to avoid getting overheated. Physical activities on warm days necessitate cooling. So, the polar bear goes for swimming. It is a good swimmer. Its paws are wide and large, which help it not only to swim well but also walk with ease in the snow. While swimming under water, it can close its nostrils and can remain under water for long durations. 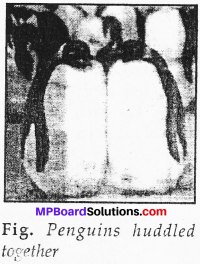 It has a strong sense of smell so that it can catch its prey for food. Another well – known animal living in the polar regions is the penguin (Fig.). It is also white and merges well wTith the white background. It also has a thick skin and a lot of fat to protect it from cold. You may have seen pictures of penguins huddled together. This they do to keep warm.

Question 9.
How do elephant living in the tropical rainforest adapt itself?
Answer:
The elephant has adapted to the conditions of rainforests in many remarkable ways. Look at its trunk. It uses it as a nose because of whjch it has a strong sense of smell. The trunk is also used by it for picking up food. Moreover, its tusks are modified teeth. These can tear the bark of trees that elephant loves to eat. 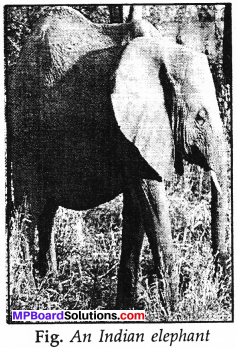 So, the elephant is able to handle the competition for food rather well. Large ears of the elephant help it to hear even very soft sounds. They also help the elephant to 4 keep cool in the hot and humid climate of the rainforest.

Choose the correct option which answers the following question:

Question 10.
A carnivore with stripes on its body moves very fast while catching its prey. It is likely to be found in

Try to answer the following questions:

Question 2.
Collect information about the Indian Meteorological Department. If possible visit its website: http//www.imd.gov.in. Write a brief report about the things this department does.
Answer:
Do with the help of your subject teacher.

Question 4.
Match the items in Column A with Column B:

Question 2.
What do you mean by weather?
Answer:
The day – to – day condition of the atmosphere at a place with respect to the temperature, rainfall, wind speed, humidity, is called the weather of that place.

Question 3.
What do you mean by climate?
Answer:
The average weather pattern taken over a long time, say 25 years, is called the climate of the place.

Question 4.
When is the climate of a place called hot and wet?
Answer:
If there is heavy rainfall on most of the days as well as the temperature is high in the same place, then we can say that the climate of that place is hot and wet.

Question 6.
Why do some places have hotter climate than others?
Answer:
The places nearer to the equator are usually hotter. This is because the sim’s rays are more concentrated near the equator than they are farther North or South.

Question 7.
Which causes the changes in weather?
Answer:
Sun.

Question 8.
Name the location in India where climate is hot and dry?
Answer:
Rajasthan.

Question 9.
Name the location in India where climate is wet.
Answer:
North – east.

Question 10.
Define raingauge.
Answer:
Rainfall is measured by an instrument called the raingauge.

Question 15.
What makes penguins good swimmers?
Answer:
Penguin’s bodies are streamlined and their feet have webs, making them good swimmers.

Question 16.
How are the paws of a polar bear?
Answer:
Wide and large.

Question 17.
Can a polar bear live happily on land?
Answer:
No, it lives happily where the land is fully covered with snow.

Question 18.
Where do the elephant live ?
Answer:
Elephant lives in forest.

Question 23.
Where do the following animals live?

Question 24.
Name any two animals which are active during night?
Answer:
Owl and Bat.

Question 25.
Name the bird from Siberia that comes to India?
Answer:
Siberian Crane.

Weather:
The day – to – day condition of the atmosphere at a place with respect to the temperature, rainfall, windspeed, humidity, etc. is called the weather at that place.

Climate:
The average weather pattern taken over a long time, say 25 years, is called the climate of that place.

Question 2.
Write a short note on the sun?
Answer:
All changes in the weather are caused by the sun. The sun is a huge sphere of hot gases at a very high temperature. The distance of the sun from us is very large. Even then the energy sent out by the sun is so huge that it is the source of all heat and light on the earth. So, the sun is the primary source of energy that causes changes in the weather.

Energy absorbed and reflected by the earth’s surface, oceans and the atmosphere play important roles in determining the weather at any place. If you live near the sea, you would have realised that the weather at your place is different from that of a place in a desert, or near a mountain.

Question 3.
How do penguins adapt with polar climate?
Answer: Penguins are white and merge well with the white background. They also have a thick skin and a lot of fat to protect it from cold. Penguins huddle together. This they do to keep warm. Further, their bodies are streamlined and their feet have webs, making them good swimmers.

Question 4.
How is camel adapted to live in desert?
Answer:
Camel lives in desert. It has long legs which help it to lift its body above the ground. So, camel is able to avoid direct contact with the hot ground. Camel drinks more than 50 litres of water at a time. Camel store the water in his body. So that it lives without water for a longer time. Due to its thick skin, transpiration of water is also prevents. That’s why camel is suited to live in desert.

Question 6.
What is the climate of polar regions?
Answer:
The polar regions present an extreme climate. These regions are covered with snow and it is very cold for most part of the year. For six months the sun does not set at the poles while for the other six months the sun does not rise. In winters, the temperature can be as low as –37°C. Animals living there have adapted to these severe conditions.

Question 8.
Write the features of lion – tailed macaque?
Answer:
The lion – tailed macaque (also called Beard ape) lives in the rainforests of Western Ghats. Its most outstanding feature is the silver – white mane, which surrounds the head from the cheeks down to its chin. It is a good climber and spends a major part of its life on the tree. It feeds mainly on fruits. It also eats seeds, young leaves, stems, flowers and buds. This beard ape also searches for insects under the bark of the trees. Since it is able to get sufficient food on the trees, it rarely comes down on the ground. 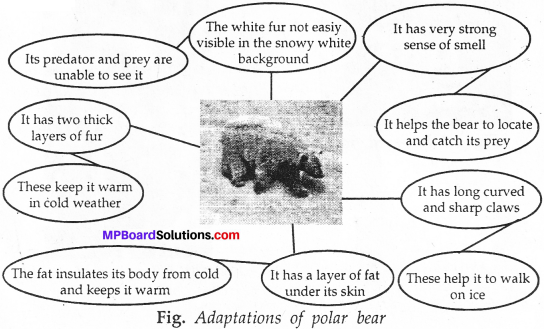 Question 2.
Write a note about “climate of the tropical rainforests”?
Answer:
The tropical region has generally a hot climate because of its location around the equator. Even in the coldest month the temperature is generally higher than about 15°C. During hot summers, the temperature may cross 40°C. Days and nights are almost equal in length throughout the year. These regions get plenty of rainfall. An important feature of this region is the tropical rainforests. Tropical rainforests are found in Western Ghats and Assam in India, Southeast Asia, Central America and Central Africa. Because of continuous warmth and rain, this region supports wide variety of plants and animals. The major types of animals living in the rainforests are monkeys, apes, gorillas, lions, tigers, elephants, leopards, lizards, snakes, birds and insects.

Question 3.
For which animals the climatic conditions in rainforests are highly suitable?
Answer:
The climatic conditions in rainforests are highly suitable for supporting an enormous number and variety of animals. Since the numbers are large, there is intense competition for food and shelter. Many animals are adapted to living on the trees. Red – eyed frog (Fig. (a)) has developed sticky pads on its feet to help it climb trees on which it lives. To help them live on the trees, monkeys (Fig. (b)) have long tails for grasping branches. Their hands and feet are such that they can easily hold on to the branches.