Question (b)
What are latitudes? Name the main latitude?
Answer:
1. The spherical and horizontal lines drawn parallel to the equator are called latitudes.

4. Similarly the 23\(\frac{1}{2}\)° latitude south, in the southern hemisphere is called the tropic of capricorn.

Question (c)
What are longitudes? Name the main longitude of the main meridian?
Answer:

Question (d)
What are the differences between latitudes and longitudes?
Answer:
Latitudes:

2. The sun never shines directly from this latitudes to the northern or southern hemispheres. Therefore, the tropic of cancer and tropic of capricorn has been determined at 23\(\frac{1}{2}\)°.

Question 2.
Question (a)
What are latitudes and longitudes. Write the characteristics of these lines?
Answer:
1. Latitudes:
The spherical and horizontal lines drawn parallel to the equator are called latitudes.

Characteristics of the Latitudes:

2. Longitudes:
The vertical lines drawn from north to south are called longtitudes.

Question (b)
What are equator and prime meridian? In how many hemispheres the world has been divided by these lines?
Answer:
1. Equator:
Equator is an imaginary line which is drawn on the globes (the model of earth) in such a way that at all points it lies exactly half way between the north pole and the south pole.

Question (b)
The distance between the longitudes towards the poles?
(i) increase
(ii) decrease
(iii) parallel
(iv) none of these
Answer:
(ii) decrease.

Question 1.
Draw a circle showing latitudes, longitudes and poles in it?
Answer: 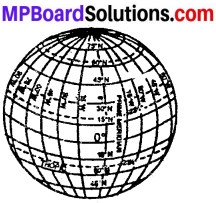