Question 1.
What are polymers ?
Answer:
Polymers are high molecular mass substances (103-107u) formed by the combi-nation of a large number of simple molecules. They are also called macro molecules. For example, polyethene, bakelite, PVC, teflon etc.

Question 3.
Write the names of monomers of the following polymers: 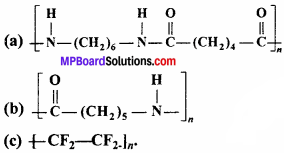 Question 6.
Arrange the following polymers in increasing order of their inter molecular forces:

Question 1.
Explain the terms polymer and monomer.
Answer:
Polymers are high molecular mass substances (103-107u) formed by the combi-nation of a large number of simple molecules. They are also called macromolecules. For example, polyethene, bakelite, PVC, teflon etc.

Question 2.
What are natural and synthetic polymers ? Give two examples of each type.
Answer:
Natural polymers:
Natural polymers are high molecular mass macro molecules and are found in nature mainly in plants and animals. For example, protein, nucleic acids, starch, cellulose etc.

Question 3.
Distinguish between the terms homopolymer and copolymer and give an example of each.
Answer:
Homo polymers are the polymers which are made by addition polymerization of single type of monomeric species.

Co-polymers are the polymers which are made by addition polymerization from two different monomers.

Question 5.
Define the term polymerization.
Answer:
Polymerization is a process of formation of a high molecular mass polymer from one or more types of monomers. Polymerization leads to linkage together of several repeating structural units with covalent bonds.

Question 6.
Is (NH – CHR – CO)n a homopolymer or copolymer ?
Answer:
It is a homopolymer because the repeating structural unit has only one type of monomer unit, i.e., NH2 – CHR – COOH.

Question 8.
How can you differentiate between addition and condensation polymeriza-tion ?
Answer:
Addition polymerization:
The molecules of the same or different monomers add together to form a macromolecule. Without elimination of any thing the addition polymers are formed by monomers which are unsaturated compound. For example, formation of polyethene from ethene.

Question 11.
Define thermoplastics and thermosetting polymers with two examples of each.
Answer:
Thermoplastics are polymers which can be easily softened repeatedly on heating and hardened on cooling. Therefore, it can be used again and again. For example, polyethene and polyvinyl chloride. Thermosetting polymers are those which undergo permanent change on heating. They become hard and infusible on heating and cannot be softened again. For example, Bakelite, and Melamine formaldehyde.

Question 12.
Write the monomers used for getting the following polymers:

Question 13.
Write the name and structure of one of the common initiators used in free radical addition polymerization.
Answer:
Benzoyl peroxide:

Question 14.
How does the presence of double bonds in rubber molecules influence their structure and reactivity ?
Answer:
From the structural point of view, the natural rubber is a linear cis- 1,4-poly iso- prene. In this polymer the double bonds are located between C2 and C3 of isoprene units. This cis-configuration about double bonds do not allow the chains to come closer for effective interactions and hence inter molecular forces are quite-weak. Therefore, natural rubber has coiled structure and show elasticity.

Question 16.
What are the monomeric repeating units of Nylon-6 and Nylon-6,6 ?
Answer:
Nylon-6: Caprolactum Nylon-6,6: hexamethylenediamine and adipic acid.

Question 18.
Identify the monomer in the following polymeric structures: 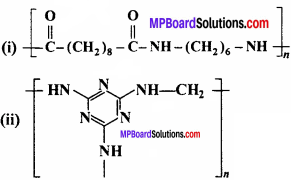 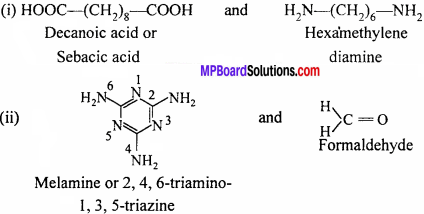 Question 6.
Which of the following is not a condensation polymer :
(a) Melamine
(b) Glyptal
(c) Dacron
(d) Neoprene.
Answer:
(d) Neoprene.

Question 7.
Which is a monomer of neoprene in the following :

Question 8.
Which of the following is a biodegradable polymer:
(a) Polythene
(b) Bakelite
(c) PHBV
(d) P.V.C.
Answer:
(c) PHBV

Question 1.
Can a copolymer be formed both in addition and condensation polymeri-zation ?
Answer:
Yes, it can be formed in both the cases, e.g., buna-S is a copolymer of styrene, 1,3 – butadiene and sodium and is an addition polymer. Nylon-6,6 is a condensation co-polymer in which monomers are different, i.e., adipic acid and hexamethylene diamine.

Question 3.
Arrange the following polymers in the increasing order of their intermo – lecular forces. Also classify them as addition and condensation polymer. Nylon-6,6, Buna-S, Polythene.
Answer:

Question 8.
What are polythene ? Write its two uses.
Answer:
It is prepared by heating ethylene at about 473 K under high pressure (1500-2000 atm) in presence of a very small amount of oxygen.

Question 9.
What is neoprene rubber ? Write its uses.
Answer:
Neoprene is a thermoplastic polymer of 2 – chloro – 1, 3 – butadiene (Chloroprene).
Method of preparation: By polymerisation of chloroprene in presence of potassium persulphate.

Question 10.
What is PVC ? Write its uses.
Answer:
Polyvinyl chloride (PVC) is a higher polymer of vinyl chloride.

Preparation:
It is prepared by heating vinyl chloride in an inert solvent in the presence of benzoyl peroxide

Question 11.
What is teflon ? Write its uses.
Answer:
It is a polymer obtained by the polymerization of tetrafluoroethylene in presence of benzoyl peroxide.

Question 12.
What is cellulose ? Write its uses.
Answer:
Cellulose is a natural polysaccharide, molecular formula of cellulose is (C6H10O5)n. It is the main constituent of cell wall of plants and is also found in the tissues of some animals. Wood contain 60% and cotton 90% of cellulose. It is an organic compound found in abundance in nature.
Uses:
It is used to manufacture semi synthetic polymer, artificial thread and plastic.

Uses:
(i) At low pressure and temperature polythene is formed from ethylene.

It is used for making toys, radio, T.V., cabinet.

It is used for making bottles, pipes, gramophone records.

Question 16.
How is bakelite prepared ? Write its uses also.
Answer:
Bakelite is cross – linked polymer. It is prepared by condensation of phenol and formaldehyde in presence of alkali.

Uses:
Soft bakelite formed due to less polymerization are used as binder in wooden items, in varnishes and liquors. Hard bakelite are formed by high degree of polymerization and are used for manufacture of electrical goods, comb, fountain pens, gramophone records, table tops like pharmica, etc.

Question 17.
Write the method of preparation, properties and uses of Nylon-6,6.
Answer:
Preparation:
Nylon is a polymer containing amide

Nylon-6,6 is prepared by the polymerization of hexamethylenediamine and adipic acid. The meaning of 6,6 is that in the polymer chain both acid and diamine molecules contain 6-6 carbon atoms.

(a) Polysaccharides:
Starch and cellulose are important example of polysaccharides. They are the polymers of glucose. Cellulose is the main structural material of plants. Plants store their food in the form of starch.

(b) Proteins:
Proteins are polymers of a-amino acids. They are the main constituents of animal cells. Natural silk, wool and leather are some examples.

(c) Nucleic acids:
The polymers of nucleic acids are called nucleotides. Their impor-tant examples are RNA and DNA.

(d) Natural rubber:
Natural rubber is prepared from latex which is obtained from rubber tree. It is a polymer of 2-methyl-1, 3-butadiene (isoprene). It may be noted that polymers like polysaccharides, nucleic acids, proteins, etc. which control various life processes in plants and animals are also called biopolymers.

Question 2.
On the basis of structure polymers are of how many types ? Explain.
Answer:
Classification based on structure:
This classification is based upon how the monomeric units are linked together. The polymers of this class are of three types:

(i) Linear polymers:
In this type of polymers, the monomer units are linked together to form long linear chains. These linear chains are placed one above the other and are closely packed in space. If A is the monomeric unit then linear chain is formed as given in Fig.

(iii) Cross-linked polymers:
In these polymers, the monomer units combine to form a three-dimensional network.

Characteristics:
They are hard, rigid and brittle due to cross-linked structure, e.g., bakelite, melamine, etc.