English Subject experts who are having max years of experience prepared this MP Board Solutions for Class 11th. They have explained all the topics covered in the board prescribed latest syllabus in a simple way to understand easily. So, students can prepare Chapter 6 Cherry Tree from this MP Board Class 11th English book PDF.

1. The poet has used words that are used as ‘nouns’ and verbs both like ‘watered’. Use the following from the poem as nouns and verbs both in two separate sentences of your own:
[summer, grass, sycthe, shoots, arms, light, air, watch, season, jewel, blossom. ]
Answer:

(A) Following have been ‘personified’ in the poem

(1) ‘Cherries have a way of growing’
(2) a tree had come to stay
(3) a monsoon blight-shirvelled the slender stem.
Find more examples of personification from the poem and write explanation of the lines above (1, 2, 3) and the expressions selected by you.
Answer:

(C) In the beginning of the poem is talking of the Cherry tree and how it grew against all odds towards the end he expresses his own joy and action pick out the stanza and write its meanings.
Answer:
The growth of the cherry tree against all odds is expressed through these lines:
……. Even so,
next spring I watched three new shoots grow,
The young tree struggle, upward thrust,
Its arms in a fresh fierce lust
For light and air and sun.
The lines that express the poet’s joy- came back thinner, rather poor,
But richer by a cherry tree at my door.
Yes, I!-praised Night and Stars and tree.
That small, the cherry, grown by me.

(D) Alliteration is a figure of speech in which first sounds are repeated to give the poem a lyrical quality.
For example:
a monsoon blight
Shrivelled the slender stem …………..

Find other examples from the poem and write them in your note- book.
Answer:

(A) On the basis of the reading of the poem, answer the questions:

Question 2.
What is the miracle? How was it caused by time and rain?
Answer:
The miracle is something that is thought to be done by some divine or super-natural power. Here, time and rain caused the growth and bloom of the cherry tree despite all its difficulties.

Question 4.
The poet says, Its arms in fresh fierce lust’. What do ‘Its arms’stand for?
Answer:
Its are stand for the branches of the cherry tree.

(B) What do you understand by the following expression? Write a
sentence for each expression to bring out its meaning:
1. grass running wild
2. monsoon blight
3. growing pains
4. sleepiest breeze
5 . dappled green
6. blue blind sky
7. fresh fiercest lust
Answer:

A. The poem starts with a flash back where the poet recollects something from the past and then narrates about present. Talk to your friend about your childhood of something that you recollects as a pleasant memory which has borne fruits in your present life, (work in pairs) Share this with your class. Select two best narratives and put them in a poem form. Your can think of a friend a scene an incident a school happening
Answer:
Do it yourself.

B. Read out the poems in the class and hold discussions on their poetic qualities, use of language and figure of speech etc.
Answer:
Do it yourself.

A. Read the following poem and write answer to the questions given after the poem.
Answer:
See the poem on the text book page (41-42).

B. Use the following words from the poem in sentences of your own
trust – clouding
dare – bough
royal – greet
stridy
Answer:

All trees have a different way of growing, some are delicate some are hardly plants; some are perinnial and some seasonal; some are fruit bearing and others are decorative with beautiful foliage and flowers; have you tried to grow plants of your.. own? Which were those? Express your view on pleasures is pains of growing tree, plant etc.
Answer:
Do yourself

A. You have read William Wordsworth’s poem Daffodils whose the poet says
“For oft, when on my couch I lie,
They flush upon that inward eye
which is bliss of solitude;
And then my heart with pleasure fills,
And dance with the daffodils.”
Compare the lines with Ruskin Bond’s following lines:
I by on grass, at ease
Looking up through leaves at the blue Blind sky”
Answer:

B. Read the following verses carefully and answer the questions that follow.
(See the poem on Textbook page-43)

Questions:
(i) Describe in your own words the effect on a slender brich tree of the snow fall.
(ii) What is the poet trying to say in the last line of the poem?
(iii) Describe the effect of the following on birch trees:
(a) ice-storms
(b) rising breeze
(c) warmth of the sun Answers
1. The slender birch tree has been bent down.
2. The poet is trying to say that the real bliss of nature seems to be over.
3.

(iv) Say whether the following statements are true or false.
(a) A child in the tree is swinging the birch tree.
(b) The tree is siwnging left and right due to the blowing of breeze.
(c) The birch trees are misshaped by the ice-storm.
(d) After the sun-rise, the branches begin to move gently left and right and look like a rainbow.
(e) After the sunrise, the trees loaded with ice become the inner
dome of heaven.
Answer:
(a) true, (b) true, (c) true, (d) false, (e) true.

‘Chery Tree’ is a poem by Ruskin Bond. It tells us the poet’s ecstasy over a tree of his o\Vn which took eight year to grow.

Eight years have passed since the poet placed a cherry seed in the grass. He thought it to be his own tree. He watered it once. After that he forgot about it. But as cherries have a process of growing, so poet’s cherry also grew without any care. Suddenly in a summer season the poet found the growth of a tree of cherry. It was small like a five month old child lost in tall, wild grass. Goats ate its leaves and grass-cutter had snapped it with his syethe. Even after that the poet saw in the next spring three new shoots grown there. The young tree had struggled upward for fresh light and air and sun.

The poet had waited while time and the rain had done wonder by giving full growth to the tree. Next year the poet went to Kashmir to spend his holidays. When he came back he found a full grown cherry tree at his door. It was six feet high. He hardly believed its berries. They were ripened and jewelled in the seen hanging from a branch. The other year there were blossoms pf different colours giving comfort to the poet.  The poet while lying on the grass with comfort was looking up through leaves at the blue blind sky. He also enjoyed finches (small passorine birds) flying in the sky softly and rapidly.

The poet also felt the joy of looking at the bees sucking nectar from each bloom of the cherry tree. The sun was sinking softly and the stars turned in the sky. The singing of the crickets and shining of the moon were also very comfortable. The poet is thankful to the cherry tree which provided him with such a fine heavenly bliss. 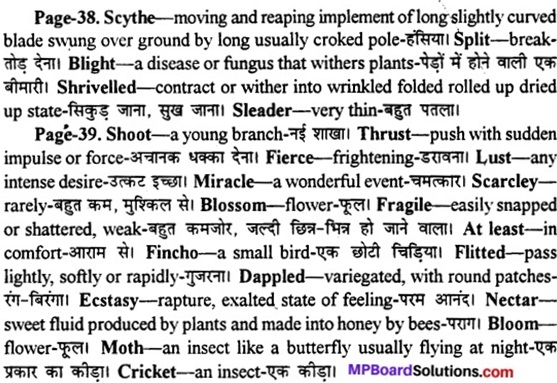 Read the following stanzas carefully and answer the questions that follow:

1. Eight year have passed
Since I placed my cherry seed in the grass,
“Must have a tree of my own, I said,
And watered it once and went to bed And forgot.

2. Goats ate the leaves, the grass cutter’s sycthe
split it apart and a monsoon blight
Shrivelled the slender stem Even so.

Questions:
(i) What is being talked about her in these lines?
(ii) What did the goats do to it?
(iii) What did the monsoon blight do to the tree?
(iv) How was the tree split apart?
(v) Give a word from the above stanza similar in meaning to ‘thin’.
Answers:
(i) A little cherry tree is being talked about here.
(ii) The goats ate the leaves of the tree.
(iii) The monsoon blight made its stem shrivelled and slender.
(iv) The tree was split apart by the grass cutter’s scythe.
(v) ‘slender’.

3. I lay on the grass, at ease,
Looking up through leaves at the blue
Blind sky, at the finches as they flew
And flitted through the dappled green.

Questions:
(i) Where was the poet lying?
(ii) What was he doing there?
(iii) What did he see in the sky?
(iv) Explain the expression ‘the blue blind sky’.
(v) Explain the meaning of ‘dappled’.
Answers:
(i) The poet was lying on the grass.
(ii) He was enjoying the beauty of nature in the sky.
(iii) He saw finches flying in the sky.
(iv) The blue sky is sometimes covered with dark cloud.
(v) dappled-variegated with round patches.

We hope the data given here will benefit you to the fullest extent at the time of preparation. For better understanding of English subject this MP Board Solutions for Class 11th English Chapter 6 Cherry Tree Questions and Answers PDF is the best resource. Download & ace up your preparation. Keep in touch with us and get the latest information on MP Board Textbook Solutions PDF.