Fill up the blanks:

Class 8 Social Science Chapter 6 Lithosphere And Landforms Question 1.
What is difference between a fold mountain and a rift mountain?
Answer:
Fold Mountain are formed by the horizontal land movement in earth which causes wave like bends in rocks. Rift mountains are formed by breaking of rocks with pressure and tension of the horizontal land movement which causes few part of land lift and few part go down.

Mp Board Class 8 Chapter 6 Question 3.
What is Volcano? Give two causes of eruption?
Answer:
Volcano is an opening on the earth crust, in the form of lava which emits molten magma, rock pieces, gases and steam on the surface of the earth. The two causes of eruptions are, the break up of radioactive minerals under die bottom of earth and the movement of plates due to eternal heat.

Class 8th Social Science Chapter 6 Question 4.
Mention the merits and demerits of earthquakes?
Answer:
Earth quakes are useful when we get fertile lands, formation of new land areas, valuable minerals come upon the surface and lakes are formed in low-lying areas. Earthquakes brings loss of life, material, devastating floods and few areas go down of land.

Mp Board Class 8 Science Solution Chapter 6 Question 1.
What is Rock? Explain the type of Rocks?
Answer:
The earth’s crust is made up of rocks. A rock is a mixture of minerals which forms the earths upper part called crust. These rocks are composed of all types of material which may be hard and resistant substance like granite, marble etc. and of soft and loose substance like salt, sand, mud, chalk etc. The difference between rock and mineral is that the rocks contain in them various types of minerals. Rocks do not have definite chemical composition while minerals have definite chemical properties.

1. Igneous Rock:
Igneous rocks are formed due to the solidification of molten magma. The high temperature inside the earth causes rock masses to melt. The molten material due to heavy pressure inside tries to come out on the surface or to low pressure areas.

2. Sedimentary Rock:
Sedimentary rocks are formed due to the deposits of sediments brought by wind, running water or moving ice. These deposits or sediments lay down on the floor of the river beds, lakes, sea etc. forming one layer over the other. These layers contain fossils also. Fossils are the remains of animals embedded in the rocks. They are also called stratified rocks. Sandstone, Limestone, Clay, Coal, Gravels etc. are the examples of Sedimentary rocks.

The chemical composition of minerals present in the rocks get transformed into new type minerals. For example Limestone gets transformed into Marble, Sandstone changes into granite. Other examples of metamorphic rocks are slate and gneiss etc.

Social Science Chapter 6 Class 8 Question 2.
Define the formation of earth by Diagram?
Answer:
The structure of earth can be divided into three distinct parts. They are Crust, Mantle, Core.
1. The Crust:
The outer most part of the earth is crust. It is also known as lithosphere. It has thickness of 60 kms. It forms the continents, islands and lands underlying seas and oceans. The outer crust is made of silicates and aluminum and is called SIAL. 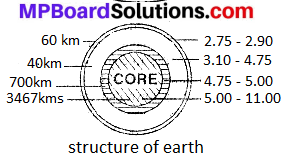 2. The Mantle:
The next layer that underlies Sial is Mantle. It has two parts:

3. The Core:
The innermost part of the earth is known as Core it extends beyond the depth of 2900 kilometers. It is made up of heavy meta like iron and nickel generally expressed as Nife. They believed to be source of earth magnetism its thickness is 3467 kms. The temperature inside the earth increases at an average rate of 1°C for 32 meters of depth This is also called bray sphere

Class 8 Science Chapter 6 Mp Board Question 3.
Mention the following rocks in the table given below?

Lithosphere 8th Standard Notes Question 1.
Draw a diagram of the formation of the earth?
Answer: 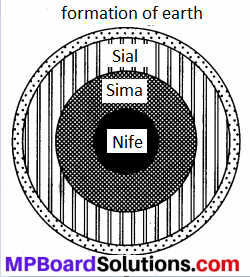 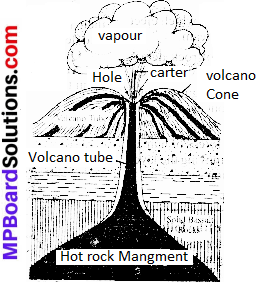