In this article, we will share MP Board Class 8th Science Solutions Chapter 2 Microorganisms: Friend and Foe Pdf, These solutions are solved subject experts from the latest edition books.

Mp Board Class 8 Science Chapter 2 Question 1.
Fill in the blanks:
(a) Microorganisms can be seen with the help of a ……….. .
(b) Blue green algae fix ………….. directly from air to enhance fertility of soil.
(c) Alcohol is produced with the help.
Answer:
(a) microscope
(b) nitrogen
(c) yeast
(d) bacteria.

Mp Board Class 8 Science Solution Question 3.
Match the organisms in Column A with their action in Column B.

Mp Board Class 8 Science Solution English Medium Question 6.
Name the microorganisms which can fix atmospheric nitrogen in the soil.
Answer:
They are Rhizobium, Azobactor, blue-green algae such as Anabaena and Nostoc, etc.

Class 8 Science Solution Mp Board Question 9.
What are antibiotics? What precautions must be taken while taking antibiotics?
Answer:
Antibiotics. The medicines which kill or stop the disease causing microorga¬nisms are called antibiotics. The common antibiotics produced from bacteria and fungi are penicillin, streptomycin and tetracycline etc.

The precautions to be taken in using antibiotics are as follows:

Mp Board Solution Class 8 Science Question 1.
Pull out a gram or bean plant from the field. Observe its roots. You will find round structures called root nodules on the roots. Draw a diagram of the root and show the root nodules.
Answer:
Do yourself.

Mp Board Class 8 Science Solutions Question 4.
Project: Requirements – 2 test tubes, marker pen, sugar, yeast powder, 2 balloons and lime water.
Take two test tubes and mark them A and B. Clamp these tubes in a stand and fill them with water leaving some space at the top. Put two spoonful of sugar in each of the test tubes. Add a spoonful of yeast in test tube B. Inflate the two balloons incompletely. Now tie the balloons on the mouths of each test tube.
Keep them in a warm place, away from sunlight. Watch the setup every day for next 3-4 days. Record your observations and think of an explanation. Now take another test tube filled 1/4 with lime water. Remove the balloon from test tube B in such a manner that gas inside the balloon does not escape. Fit the balloon on the test tube and shake well. Observe and explain.
Answer:
The balloon in test tube B will get inflated because the process of fermentation has taken place in test tube B. Yeast, bacteria and carbon dioxide gas produced during this process has inflated the balloon. Now the balloon will get a little deflated as gas is consumed by the lime water and the lime water will turn milky. 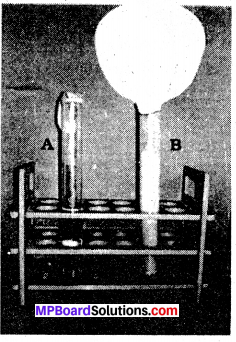 Class 8th Mp Board Science Question 7.
Name some bacteria which are helpful?
Answer:

Mp Board Class 8th Subject Science Question 8.
How do viruses reproduce?
Answer:
Viruses have their own genetic material but they do not have a cellular structure nor metabolic activity of their own. Viruses use the energy of the host cell and change their machinery in such a way they start producing more viral genes. As they multiply and grow in numbers, the host cell eventually bursts releasing all the virale cells.